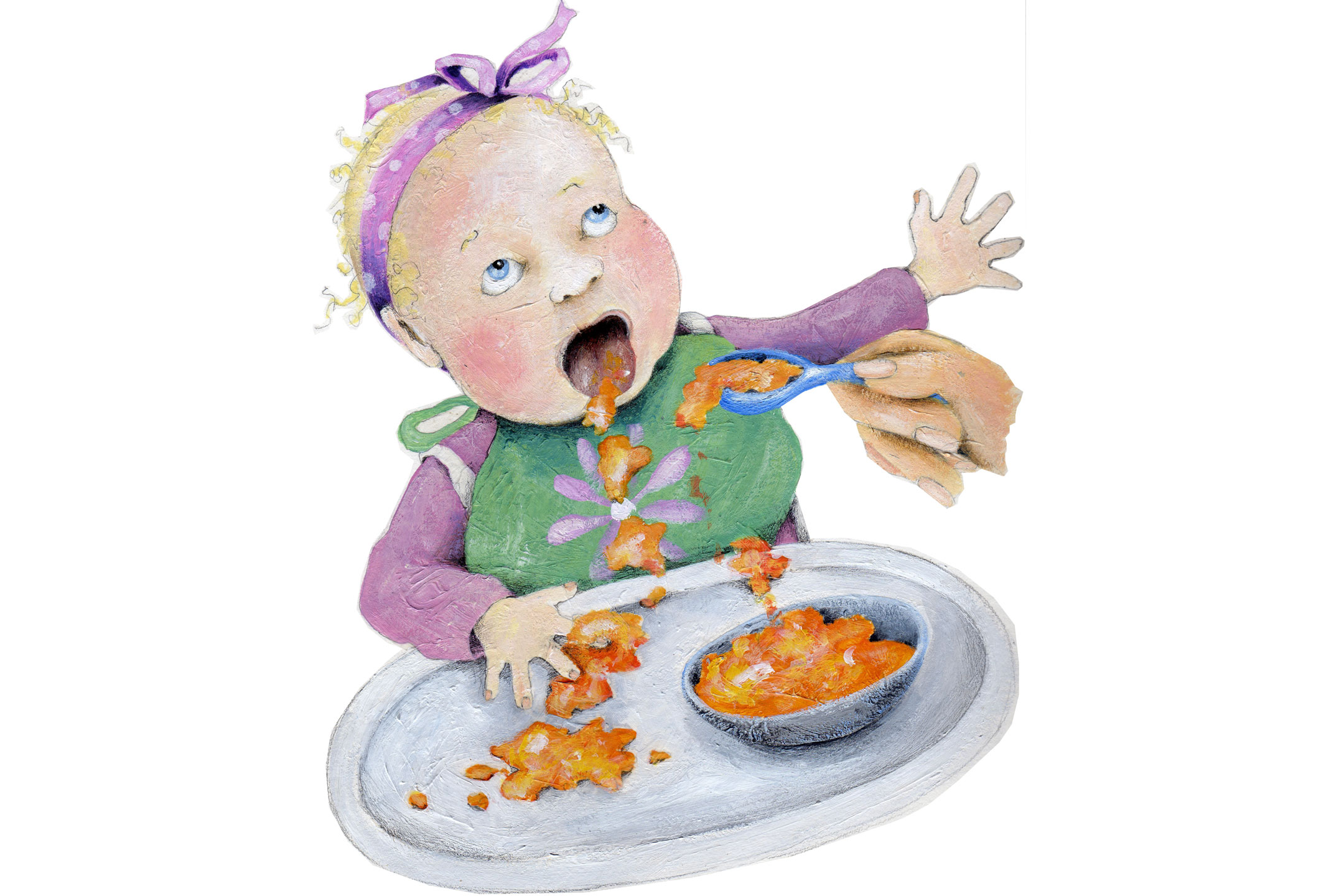 04 May A Solid Rejection

Cassie Hamer writes about her baby’s introduction to food, which was a sickening experience.

It was a video-camera moment. My five-month-old daughter was about to take her first mouthful of solids, a gloopy mix of rice cereal and breastmilk. I pressed ‘record’ as my husband gently prised her lips open with the spoon and emptied it onto her tongue. For a moment, my little girl looked delightfully confused. ‘This isn’t breastmilk!’ I could see her thinking. Eventually she swallowed. Hooray! We continued with a couple more spoonfuls. Most went in and some was swallowed. All in all, it seemed a successful start. Or so we thought.

An hour-and-a-half later, my baby started vomiting and didn’t stop for 45 minutes. When there was no more in her little stomach, she became extremely lethargic. It was heartbreaking and frightening to see her so limp and sleepy. We raced her to our GP, who diagnosed a gastro virus. He advised us to offer her plenty of fluids and temporarily discontinue the solids.

A few days later, we tried the rice cereal again and once more, an hour-and-a-half later, she was extremely ill. Alarm bells started to ring, but I concluded it could still be the tail end of the virus. I’d never heard of any child reacting badly to rice cereal. It seemed impossible. A week later, we tried a third time, and the same thing happened – profuse vomiting. I knew this wasn’t the virus. I was worried. I had no idea what was happening and my imagination was running wild.

We made an appointment with a paediatrician. In the meantime, my husband and I hit the internet and discovered food protein-induced enterocolitis syndrome (FPIES), a type of allergy in which particular foods cause inflammation of the small and large intestine. Triggers can include cows’ milk, soy, oats, legumes, meat and rice. The symptoms described closely matched those my daughter had experienced. The paediatrician agreed. While there’s no skin or lab test for FPIES, from our description of her episodes he diagnosed it straight away.

In many ways, it was a huge relief. The good thing about FPIES is that children usually grow out of it by three or four. The only treatment is to avoid the trigger food. I’ve become an expert at reading food labels, since rice flour is a common ingredient in many processed foods.

With the diagnosis confirmed, the paediatrician advised resuming solids, avoiding rice. Still, it was with some trepidation that we gave our girl her first meal of pureed sweet potato. Would it stay down? An hour-and-a-half passed. Nothing. No vomiting – just a happy baby with a full tummy, at last. Our little girl is now nearly three and has experienced no major vomiting episodes since she started on non-rice solids. She’s a rather fussy eater and is very suspicious of new foods, which is not surprising given her traumatic introduction to solids.

In a year or so we’ll take her to our local children’s hospital for a supervised ‘food challenge’, where she will eat some rice and be closely monitored for any reaction. I’m already anxious about the test. Making her ill is the last thing I want to do. Then again, it would be wonderful for her to have complete freedom in her eating, and would ease the pressure on me to be constantly at the ready to pull a wayward rice cracker out of her hand when we are out with friends.

I never expected my daughter’s first encounter with solids to be so dramatic. I look back now with very different eyes on that video footage of her first ‘meal’. My husband and I were so excited: we had no idea of what lay ahead. But that’s parenting for you. Sometimes those moments, the ones you build up in your head, just don’t pan out the way you anticipate. Other times, the big highs happen when the camera is firmly tucked away in the cupboard, like when your child spontaneously gives you a big cuddle and says “I love you”. These are the moments that make the challenging times feel like a distant memory.