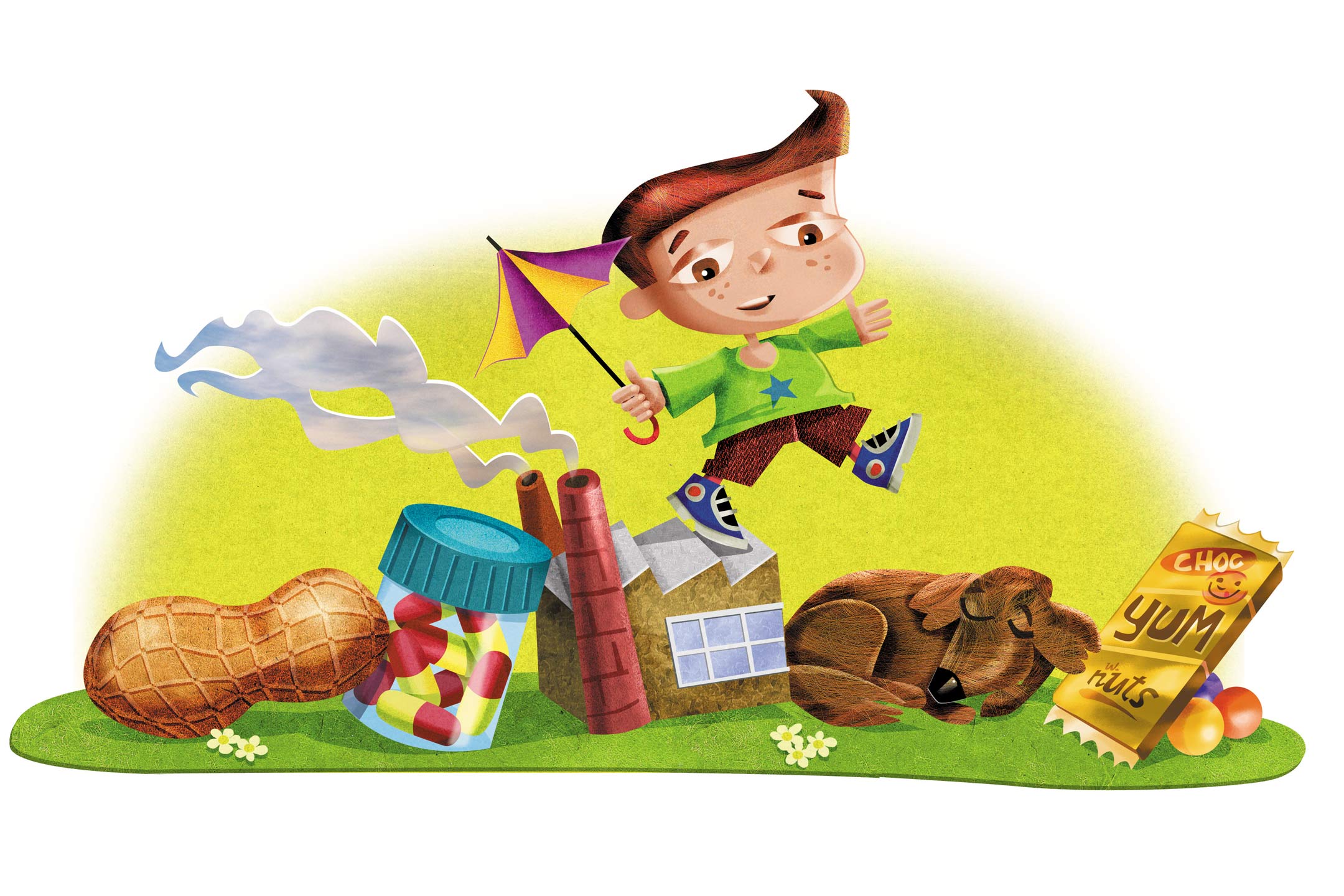 23 Oct Allergic To The 21st Century:The Nature of Allergies

Part one of Dr Sam Tormey’s examination of the nature of allergies and our growing propensity to suffer from them.

Such a dramatic rise in the prevalence of allergies suggests that a change in the modern environment is to blame, rather than a change in the genetics of the human immune system.

For a word that was only invented 100 years ago, ‘allergy’ has very rapidly become part of modern parlance. Allergies are a familiar nuisance to Australian parents: one in three of us does, or will, suffer from them, our children are even more likely than us to be affected, and the number of Australians suffering from allergies continues to increase as the years go by. Why is this and what can be done about it?

Allergic reactions take many forms. All are caused by an abnormal response of our immune system to a stimulus. For most people, the result is annoying rather than life-threatening. Hay fever, for example, is now said to be the most common chronic disease worldwide. More properly known as allergic rhinitis, hay fever is an allergy to airborne pollens and other particles that causes watery eyes, runny nose and sneezing.

Generally, hay fever can be easily treated with antihistamines, but not all allergic reactions are merely irritating. At a school camp in NSW in 2002, 13-year-old Hamidur Rahman was taking part in a light-hearted competition with his fellow students: who could eat a spoonful of peanut butter the fastest? Soon after his turn, Hamidur began to feel unwell and left the room. Shortly afterwards, despite the efforts of his teachers who performed CPR, he lay dead. Hamidur had become another casualty of anaphylaxis, the most dangerous form of allergic reaction, which kills an estimated 10 to 20 Australians each year.

So how did such a benign thing as a peanut become so deadly?

To answer that question, it is important to understand what happens to the body during an allergic response. Often when we think about our immune system, we think in terms of strength and weakness. We take all sorts of supplements to boost or strengthen our immune systems, and if we fall victim to a common cold we say that our immune system was weak. In fact, it is not terribly common to have a weak immune system, and all those supplements do little or nothing to strengthen it. It is far more common to have a hypersensitive immune system – that is, a problem with the regulation of our immune functions that causes our bodies to overreact to things that pose no real threat, such as peanuts. It is this overreaction, rather than the stimulus itself, that causes the symptoms of an allergic reaction.

The cells of the immune system recognise real threats such as bacteria and viruses and destroy them. Importantly, they also have the capacity to remember such hostile agents in case they pose a threat in the future. This, of course, is the basis of vaccination against various diseases – the idea is to prime the immune system so that it is ready to respond quickly if it encounters a full dose of that particular disease. Unfortunately, the system can also be primed to respond briskly to non-threatening proteins such as pollens, shellfish, nuts and animal fur.

Remember that one in three adults (and 40 per cent of our children) will show evidence of a hypersensitive immune system. In these individuals, the immune system is armed and ready to react to the specific protein causing the allergy. It’s a bit like calling in the police SWAT team to answer a knock at the door. When the offending protein comes into contact with our body (through our having touched it, eaten it or breathed it in), it meets antibodies that lock onto it and activate an immune response from various cells in the immune system.

Mast cells are a crucial part of this response.

These are cells that release various chemicals during an allergic reaction. Histamine is one of these products and it can create havoc in the affected area within seconds of contact with the allergen. If you have ever seen hives or welts come up on the skin, you are observing the rapid effects of histamine. It signals to capillaries to become ‘leaky’, causing lots of fluid and white blood cells to flood into the area. Histamine also causes the release of mucus, hence the running nose of the hay-fever sufferer. Generally, such reactions on the skin and around the nose and eyes cause irritation only, but when they occur in the throat, airways or intestine, more dangerous symptoms can result.

Asthma is a disease characterised by hypersensitive airways.

It is strongly linked to allergic or hypersensitive immune reactions. Many children with allergic reactions such as eczema and hay fever will also have asthma, as part of a spectrum of hypersensitivity. Asthma is not exclusively caused by or associated with allergies, but in many families the connection is very strong. When histamine and other chemicals are released into the tissues lining the airways, there is swelling and constriction causing the airways to become narrow. The wheeze of asthma is the noise made by air being forced through these narrow airways. The mucus that is released exacerbates the problem and can completely block the airways. Similarly, allergic reactions to proteins in certain foods can cause histamine release in the small intestine, which causes irritation and narrowing of the bowel, resulting in cramps, vomiting and diarrhoea. When such an allergic response occurs in the tongue or the larynx, rapid swelling of the tissues can cause the upper airway to become too narrow for enough air to pass to the lungs.

But the most dramatic response of all is when the whole body is involved, as occurs in anaphylaxis.

Affecting about one in 100 Australians, an anaphylactic reaction is a systemic (rather than local) allergic reaction that causes a massive release of histamine and other chemicals into the bloodstream. Full-blown anaphylaxis may involve all of the above local reactions (hives, wheezing, abdominal cramping and throat swelling), accompanied by a sudden drop in blood pressure. If not treated, cardiac arrest may also occur. All of this can happen within minutes. About one-third of anaphylactic reactions are caused by certain foods (such as peanuts), one-third by drugs (such as penicillin or certain X-ray dyes) or insect bites (such as bee stings), and in one-third of cases, the cause is never found.

Fear of an anaphylactic reaction – and the subsequent lawsuit – is the reason for those vague warnings on food packaging such as “product may contain traces of nuts”. A trace may be all that is needed to trigger anaphylaxis. When the late Victorian mobile-phone millionaire (Crazy John) John Ilhan kissed his daughter after having eaten tree nuts, she suffered an anaphylactic reaction. Fortunately, she survived the experience, and her father then contributed $1 million to establish the Ilhan Food Allergy Foundation

Look for Part Two-Allergic To The 21st Century: Have we become too clean and healthy for our own good?

Dr Sam Tormey is a doctor who writes on medical issues. For further advice, take a look at the ASCIA website or talk to your general practitioner.