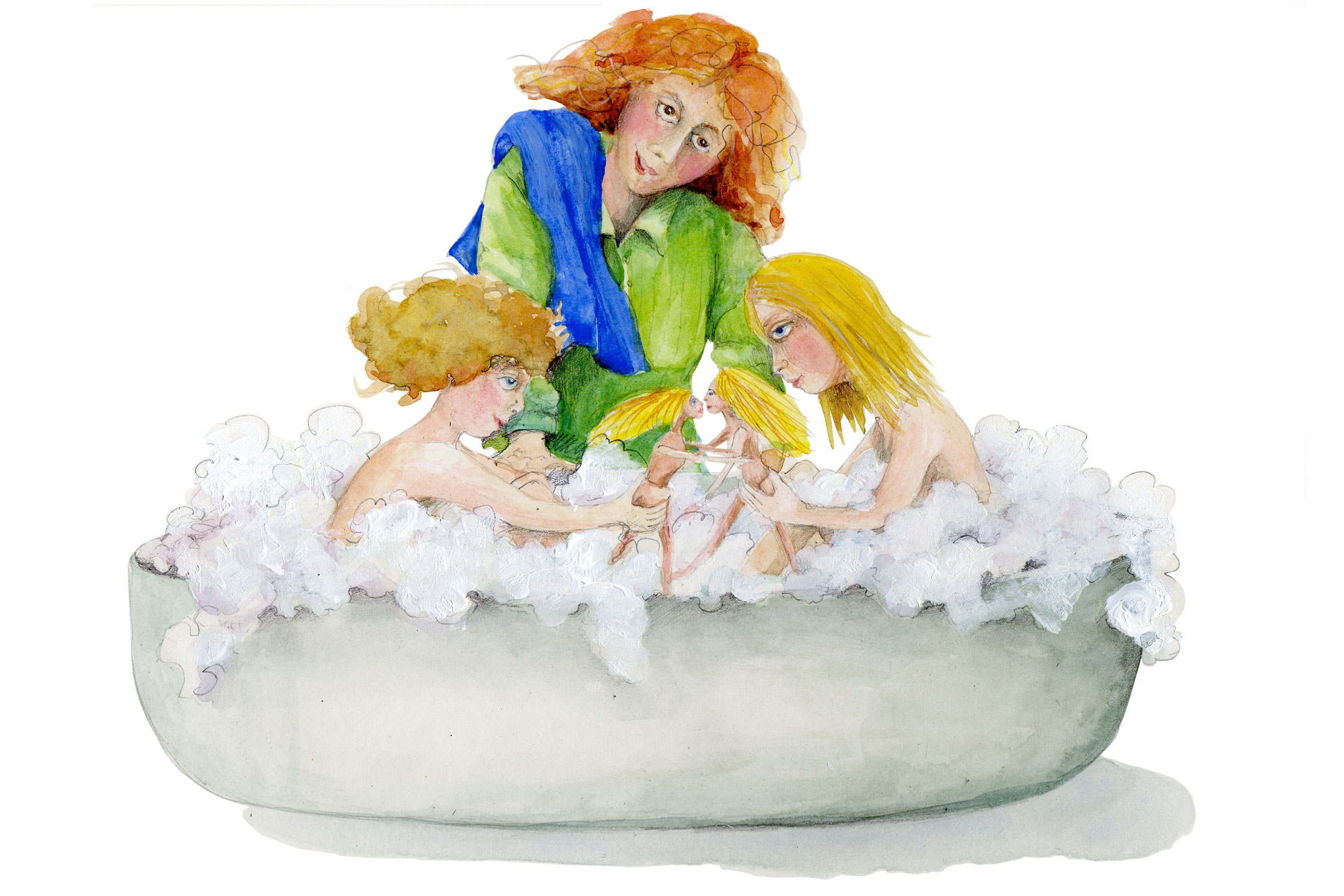 Amber Hamam finds herself in murky water as she overhears some bath-time whispers.

I’m not conservative or a prude, but is it too much to ask that my daughter have an innocent childhood?

I was at a children’s party recently, and since it ran late into the evening, I took responsibility for bathing the children. They were paired up, and in the second group were two girls aged six and eight. They each held a doll, and the eight-year-old was leading the game. She whispered to her conspirator, “Let’s make them kiss”. Kids’ whispers are always so loud you can hear everything they say, but I pretended not to. The next whisper, however, I couldn’t ignore: “Let’s make them have sex”.

The six-year-old probably didn’t know what that was, but since the elder girl was leading the way, they fervently bumped the dolls together. I’m sure the younger one thought it was a type of wrestling, but I was horrified.

Leaving the bathroom momentarily, I sought out the younger girl’s mother to see how she wanted me to handle it. “Um, just ignore it I guess,” she said. “Pretend it didn’t happen and they’ll move on to something else.” So I went back to watch them and said nothing, but all the while I felt ill at ease.

I kept wondering: whether there was an appropriate way to handle a situation like this or if it was best to ignore it; what’s the right age for a child to learn about sex; and what would I do if this concept was introduced to my daughter. She is younger than those two girls, but one day it could be her in the bathtub with a friend suggesting dolls have sex. It was a disturbing thought.

Is it wrong to want her to have no knowledge of sex and grown-up stuff until she is old enough to understand?

Talking with other parents, I discovered they had a similar desire to shield their young ones. “I’d change the topic straight away,” said one mum. Another has a rule with her four year old – some things are adult concepts and not for little girls to know about.

In her book Questions Children Ask & How To Answer Them, Dr Miriam Stoppard advises to always give your child an honest answer. She suggests telling a child aged four to six, “Sex is one way that two grown-ups who love each other, like Mummy and Daddy, can get as close as possible to cuddle and kiss in a special way, usually in bed. Sometimes a man and woman can start a baby when they have sex.”

I baulk at the thought of giving such an explanation to my child at the age of five or six, let alone now at age four. Perhaps the mum at the party was right to ignore the dolls-having-sex incident. After all, the six-year-old wasn’t even curious or thinking about what occurred; it was only a bit of playtime to her.

However, the bath incident is just one way my daughter could be exposed to sex. Some days I worry that in our world where everything is so open and accessible, she will be forced to grow up too fast, whether I like it or not. Adult concepts are constantly entering our children’s worlds. Even retail stores and food outlets pump out provocative and raunchy music.

I’m not conservative or a prude, but is it too much to ask that my daughter have an innocent childhood? Is it wrong to want her to have no knowledge of sex and grown-up stuff until she is old enough to understand?

One of the hardest aspects of parenthood is accepting that things outside our control can infiltrate our child’s world. All we can do is keep our fingers crossed and hope our kids don’t come across these concepts too soon. One day will be the right time to sit down and have ‘the talk’, but until then ignorance is bliss.

So, next time I’m confronted by a dolls-having-sex moment, I’m going to close my ears, pretend I never heard it and act as if everything is fine. That, or just never volunteer for bath duty at a children’s party again.