Posted at 11:21h in Editors Picks, Inform by admin

Louise Bettison looks at how defence-force families cope, and sometimes struggle, with the effects of deployment and frequent relocation.

In Perth, a young woman posts on internet bulletin boards, seeking advice about her pregnancy. Having recently relocated because of her husband’s defence-force obligations, she has no family nearby and finds it difficult to meet others in her situation. Her concerns are mainly for birth, since her husband is deployed overseas and is yet to hear whether leave will be granted for him to attend.

Despite her circumstances, the woman is unwilling to seek help from Australian Defence Force support services, believing it would stain her husband’s reputation. This perception is common but unfounded, as support workers are there to help with the challenges of deployment, according to Dr Annabel McGuire, chief investigator on the first major Australian study of defence-force families.

The Timor-Leste Family Study 2012, conducted by the Centre for Military and Veterans’ Health at the University of Queensland, involved 4000 people – past and current defence personnel and their partners – and reported that most families coped well with deployment. Those with strong relationships, support networks, coping strategies and good emotional and mental health before deployment fared best and were more likely to have the confidence to seek assistance when needed. “But some families are not doing well, and we have a duty to help those people,” says McGuire.

More than 3300* Australian servicemen and women are on deployment. About 1550 of those are in Afghanistan; the rest are involved in other conflicts, on peacekeeping or border-security duties, or on exercises. With the experience of her own husband’s 26-year service career, including several overseas deployments, McGuire understands the difficulties faced by families left behind.

“The biggest feedback from families was that becoming a single parent because your partner is deployed is hard,” she says. “And there is absolutely nothing – no support service or anything you can do – to help the loneliness the serving member’s partner feels at 10 at night.” 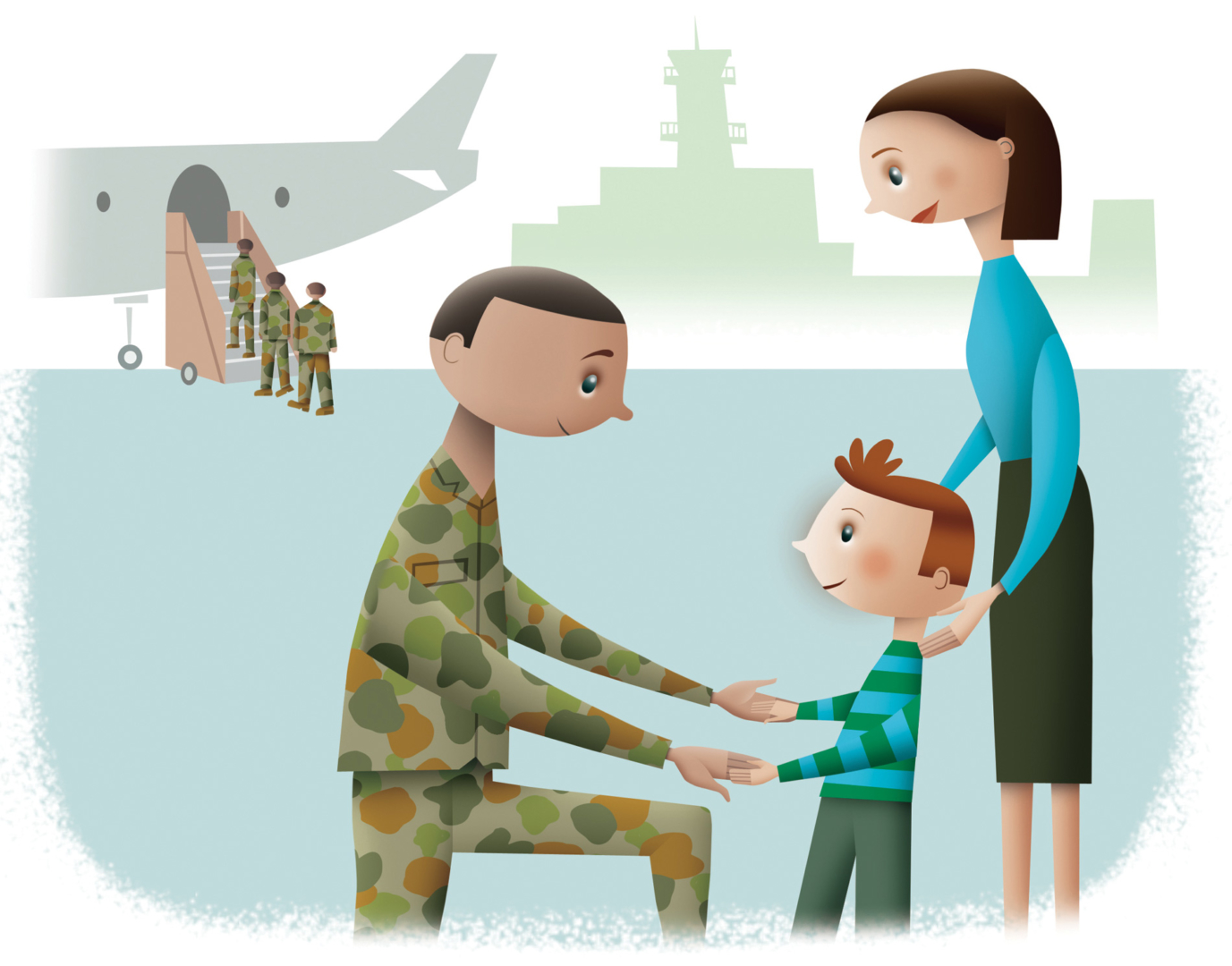 More than the long work hours and frequent relocation, deployment can cause families great anxiety, especially when their loved ones are serving in war zones such as Afghanistan. Many find help through defence-family support groups and playgroups dotted around Australia, including Karrakatta Community House at Perth’s Irwin Barracks, which offers playgroups, craft and support groups.

Annabel McGuire says US military research into the effects of deployment has been used to help identify problems and needs in Australia, but the findings do not always translate. “US deployments are usually much longer, with more rotations and day-to-day patrols that Australians are not involved in, and a lot more deaths,” she says.

US research found frequent relocation disrupted children’s schooling, a risk being managed in Australia through federally funded defence school-transition aides. The aides work with families before and after relocation to ensure continuity in the child’s education and streamline their transition into the new school. They may also work with schools to resolve systemic issues, particularly in areas with many defence families, such as schools near military bases.

Royal Australian Air Force reservist Susan Hoffmann runs the North East Defence Community playgroup at RAAF Base Edinburgh in Adelaide and has helped it grow from six to 219 families. The playgroup runs outings, craft and sewing groups, and barbecues and camping weekends to encourage social interaction.

Married to RAAF squadron leader Andrew Hoffmann, with two children and a third on the way, Hoffmann says she values community connection, especially during deployment. “We have probably moved 14 times in 17 years, and can tell you companionship becomes very important, particularly when you arrive at a new place not knowing anyone.” Hoffmann says having children helped her cope with deployment, but brought new challenges. “They distract you from the loneliness, but I think most of the women would agree night-time is the worst, when you don’t have anyone to talk to, and you become ‘friends’ with the television. Kids always make friends, but it is not so easy for adults, so we need to get them supporting one another.”

Having previously served full-time in the RAAF, Hoffmann draws on her own experiences to reach out to servicewomen who are also mothers. “Some mums who are serving, on maternity leave or part-time, will come to playgroup yet often feel they won’t be accepted,” she says. “It helps when I tell them we are all people, all parents with the same issues.”

Hoffmann believes Skype internet conferencing has helped partners and children cope with deployment, a far cry from her earlier experiences of monthly satellite phone calls. She says Skype has also helped deployed members feel more connected to their families by being able to not only regularly talk to their partners and children, but see them too.

Yet, like all families dealing with deployment, there is always the process of adjustment upon return. “Every time Andrew deploys, it is a good year to 18 months before our relationship gets back to normal,” says Hoffmann. “So sometimes we are just getting there when it is time for the next deployment.”

This is typical of many deployment-cycle experiences, says DCO social worker Roslyn Munro. The cycle often features three major phases, the first starting six weeks before deployment with a rush to get organised, bills paid, repairs done and ‘power of attorney’ arranged, alongside feelings of excitement and fear. “Once the serving member goes, the first four to six weeks are a time of trying to settle in and work out a new routine, stabilising the family and lifestyle,” says Munro.

The next phase begins six weeks before the member returns home when there is again a mixture of fear and excitement in preparing for the reunion. “We explain that it is the complete opposite of before, as both partners are considering what has changed in the family, themselves and how they are going to fit back together,” she says. “The children might also be thinking about it, and how their role – may be something as simple as taking the garbage out – was different and how it might change, so for them it is about concrete and tangible things.” The third phase, the ‘honeymoon’ post-deployment period, can last for four to six weeks, or “from the euphoria of being home until the first argument”.

Munro says typical deployments last six to eight months, and families cope best when they have a set routine and stick with it. However, it is a learning process, with different coping strategies working for different families. “We find the most important thing is to keep communication open during deployment, even when you’re wondering, ‘What am I going to talk to them about?’” she says. “It can be tough keeping the intimacy in the relationship, but funnily enough, the partner away likes hearing about normality, the things we take for granted, like the first time the child eats on their own, or the footy score or that the car registration is due.”

Munro is part of a network of social workers stationed at or near most Australian military bases. They are assisted by ‘FamilySMART’, a new suite of DCO resources designed to help families better cope with deployment and reunion. Child-friendly versions, ‘KidSMART’ and ‘TeenSMART’, are also being rolled out.

Frequent relocation is a necessary burden for defence families, causing much upheaval. However, Munro says steps are being taken to minimise its impact. “Frequent relocation can affect the child’s social, emotional and physical development, as well as the partner’s employment, education or business, so the aim now is to let families stay three years at a posting, giving a bit more stability. In the past, they might have moved every 12 months or two years.”

DCO agreed to implement 30 initiatives, such as mentoring for new defence spouses and the creation of an ‘adopt a family friend’ program to help during deployment. However, getting the word out to families can be difficult, with most respondents to the 2009 Australian Defence Force Families Survey claiming little knowledge of the diverse array of support and emergency funding available.

Yet Annabel McGuire believes more research is needed on defence families, particularly the effect on children of Australia’s extended involvement in hostile areas overseas. She says further research, and the completion next year of a study of Vietnam veterans’ families, would shed light on ways to help defence families thrive in the long term.