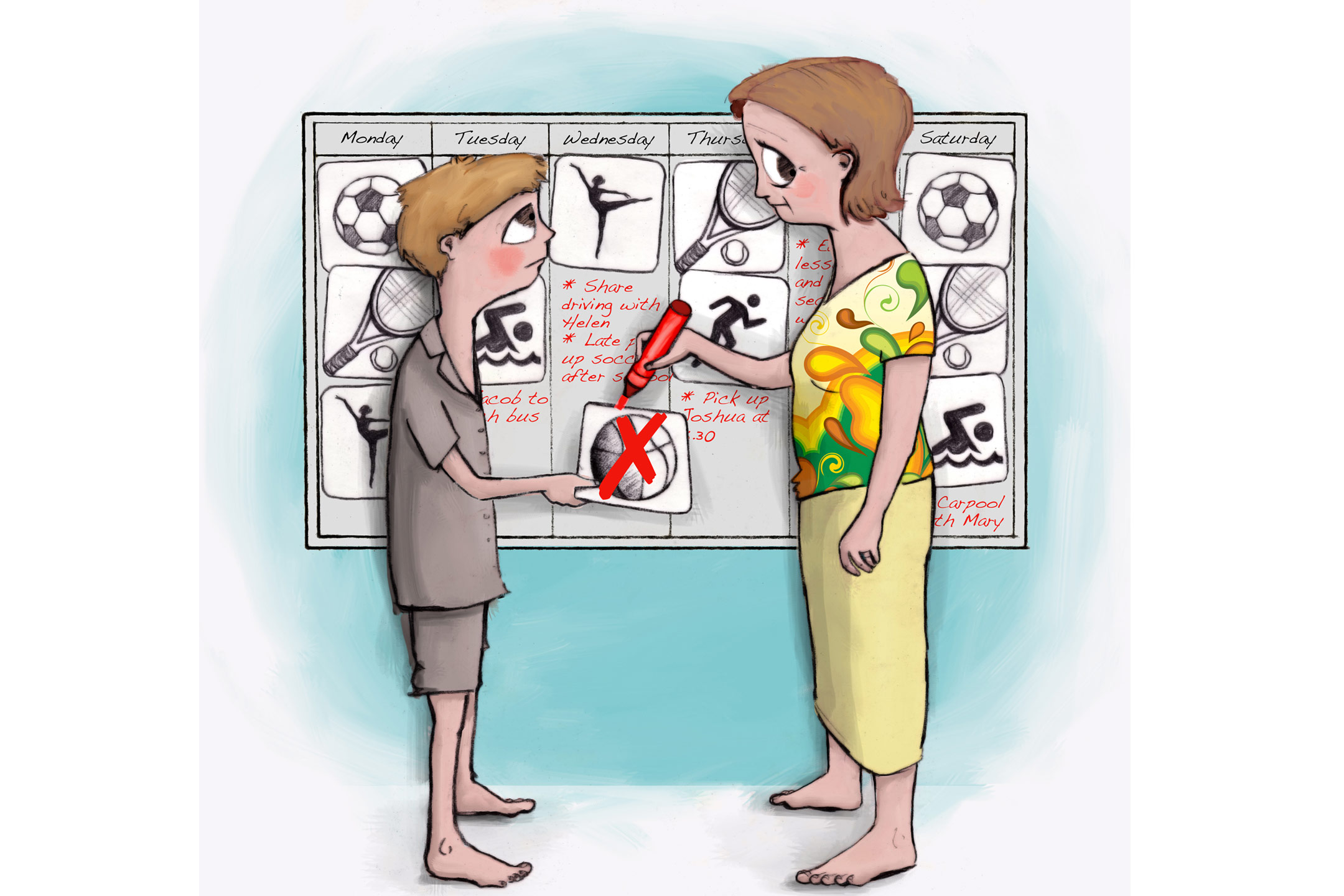 Posted at 06:25h in Validate by Staff

“Don’t be mean,” a friend said recently. I know she was only joking, but her words still hurt. I did feel mean, and guilty, but I wasn’t going to budge.

My son wants to play basketball. There’s nothing wrong with that, except he is already playing two sports, which I think is enough. It’s not simply the cost; I feel he has enough on his plate, especially now that he has started high school. And I also have enough on my plate: working from home, running a household and having three children who all lead active, busy lives.

My eldest son plays tennis and soccer, my second son also plays soccer and competes in little athletics, and my youngest, my daughter, does swimming and dancing. We are out of the house most weekday afternoons and Saturday is pretty full too. Sunday is the day my husband and I are reminded what the person we married looks like. So-called ‘down time’ is rare for all of us.

So why do I feel bad about saying ‘no’ to yet another activity? It’s the expectation that I put on myself; that absurd notion that if I don’t provide as many opportunities for my children as possible, then I am somehow failing as a parent. I know this concept is ridiculous.

It’s ridiculous because, as far as I can see, racing from activity to activity only leads to stressed-out parents and, consequently, stressed-out children. Whatever happened to good old-fashioned relaxation and free, unstructured play? Will children who spend most of their spare time undertaking structured activities served up to them by others grow up to expect everything to be organised for them? Will they lose their sense of spontaneity and become robotic in nature, or simply overly competitive?

And what about the competitive parents? “What sports does your son play?” I was once asked. When I answered, “Tennis and soccer,” the reply was, “Really? My son plays rugby league and basketball, and he also does karate and… ” The list went on.

I had an interesting catch-up with friends last week, and when the topic arose concerning our children’s participation in sport, the grumbling that followed was amazing. There were complaints about rushing from venue to venue, often dragging along weary siblings, and complaints about the lack of time for homework due to over-the-top training commitments. They were forfeiting healthy meals and grabbing takeaway for dinner on the way home instead, and rushing children into showers right before they flopped, exhausted, into bed.

Is it worth running ourselves – and our children – into the ground in our effort to ensure they don’t miss out, that they get to do what all their friends are doing? Whatever happened to children, and adults, spending time doing absolutely nothing?

Last Sunday, my daughter and I were enjoying one of those rare such times. We were lying in my seldom-used hammock, visualising pictures in the clouds moving above our heads. One of my sons was pushing the other as he sat on a skateboard, and my husband was reading a book. It was heavenly bliss, even though I felt a familiar twinge of guilt at doing nothing at all.

“Look Mum,” my daughter said, pointing at the sky, “that cloud looks like a puppy playing.” She turned to me, a solemn look on her face. “I like to play,” she announced. “Yes, I know you do,” I answered, and as I watched my sons laugh at each other, my guilt began to drift away. Just like my daughter’s ‘puppy’ cloud. And I no longer felt mean.