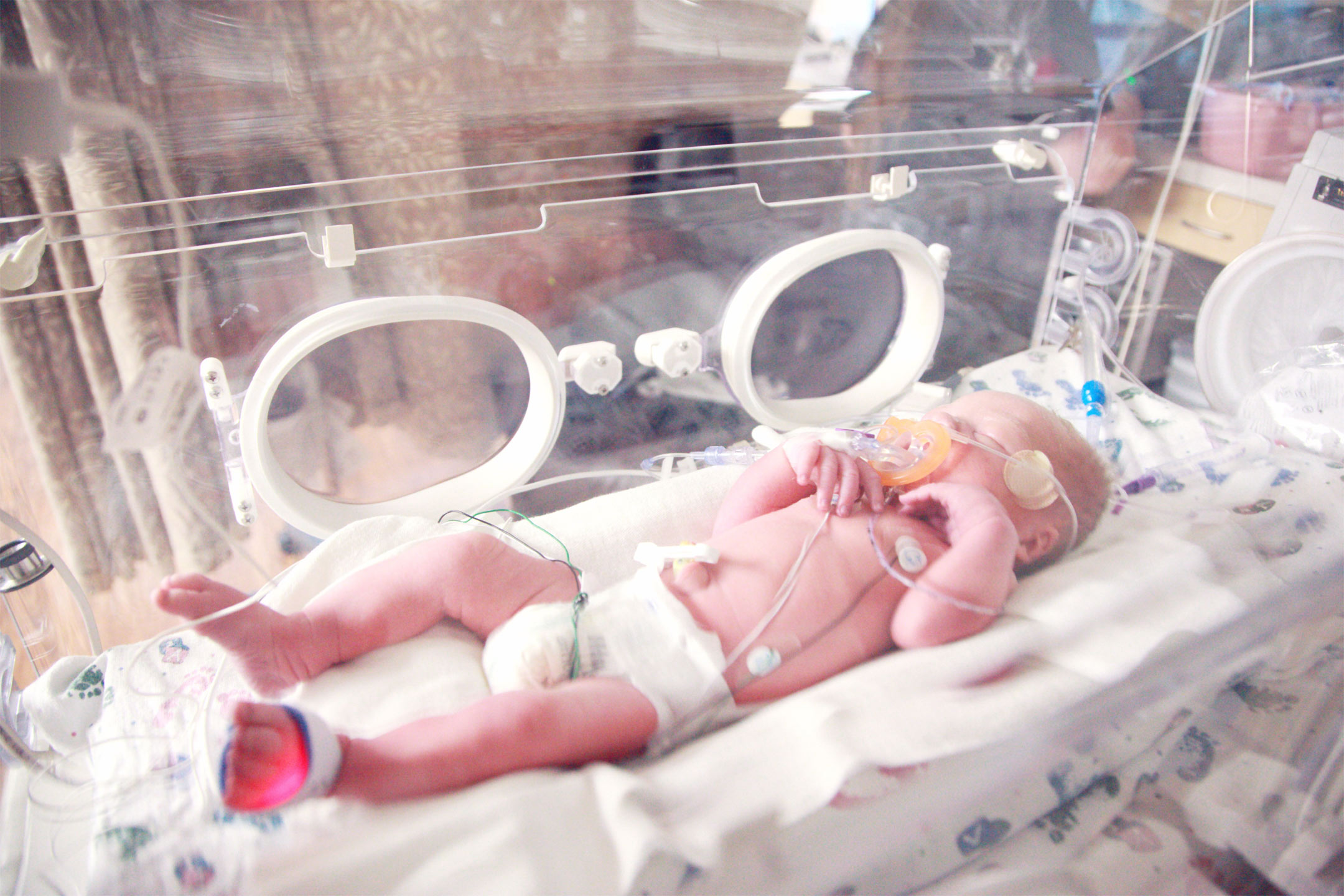 Posted at 10:46h in Editors Picks, Inform, Validate by admin

Cathy Watson enters the uncertain world of premature babies and their parents.

Barbara A* and her partner left the champagne unopened when their daughter Freya was born at 27 weeks’ gestation. Just as their daughter entered a new world, so too did they – as parents of a premature baby, or ‘premmie’, being cared for in a special-care nursery.

It’s not the normal newborn world – the one where most new parents celebrate amidst the fatigue, joined by friends and family, and showered with cards and flowers.

Instead, parents of premmies are surrounded by bewildering technology and incubators; a world of tiny babies clinging to life. When the mother is discharged, the nursery at home remains pristine, incomplete. Friends are unsure whether congratulations are in order. There is the ache of empty arms and the countless hours in the hospital watching and waiting with the baby, helping where possible; hope, frustration, grief. It’s a time of highs and lows, of triumphs followed by setbacks and, overshadowing it all, the uncertainty of what the future holds.

Premature births (that is, birth before 37 weeks’ gestation) are increasing in Australia.

The late Professor Judith Lumley Professor Emerita at La Trobe University suggested that multiple births, assisted reproductive technology (ART) and increasing maternal age are by far the most important factors associated with prematurity. As maternal age increases, so too does the risk of multiple births and, by association, premature birth. Along with this, more and more women are seeking ART, facing their declining fertility in later years.

ART increases the chance of multiple births. In a study by an Australian IVF clinic, published in December 2005 in the journal Fertility and Sterility, it was found that women who had one embryo transferred through in-vitro fertilisation instead of two had a greater chance of having a baby and faced lower risks. In those cases when two eggs were transferred, there was a much higher twin pregnancy rate and greater risk of death to a baby through premature delivery. The medical director of Genea, Associate Professor Mark Bowman, points out that there is a trend towards single-egg transfer because “people still have the same chance of having a baby but without exposing themselves to the significant risk of twins”. The recent Head of Reproductive Services at the Royal Women’s Hospital, John McBain, encouraged couples to opt for single-embryo transfer due to the risk of multiple pregnancies and the complications that can result.

There are many reasons for pre-term delivery:

Sometimes the reason for a premature birth remains a mystery.

It is rare for babies born before 23 weeks’ gestation or under 500g to survive. For babies born at 23 weeks, there is only about a 13 per cent chance of survival without neurological impairment, according to a study published in the New England Journal of Medicine.

Premature babies can have problems in breathing and in maintaining their temperature. They can have feeding difficulties and low blood-sugar levels, jaundice, infections and brain haemorrhage. The survival chances of babies born at between 23 and 28 weeks’ gestation have improved over the years, but many of these very premature babies do still die.

Babies born at or after 28 weeks’ gestation now have a chance of survival almost as good as full-term babies. Around four per cent of babies born at term will have a major disability, but the overall major disability rate for very pre-term infants from 23 to 25 weeks’ gestation is approximately six times higher. Many of these babies will have a minor disability, often one they will outgrow with time. Babies born prematurely can face many health problems, the extent and severity of these depending on their birth weight and degree of prematurity.

Keeping very premature babies alive comes at a cost to the taxpayer.

It is standard to care for them in the hospital until around their original due date, which in some cases can mean about three months as an in-patient. In the Neonatal Intensive Care Unit (NICU), it can cost for a private patient more than $3000 a day for each baby, which at an average stay of 90 days amounts to $270,000. If you’re a public patient in a public hospital, most costs would be covered by Medicare.

In many other countries, the health dollar would not be available to support such advanced technology, expertise and staffing levels required. In Australia and a number of other countries, government funding has enabled research, training and support in this area.

The Victorian Infant Collaborative Study (VICS) Group followed a number of babies born weighing less than 1000g and reviewed them at two, five, eight and 14 years of age. A smaller group was also reviewed at 18 and 22 years of age. Most grew normally and achieved expected average heights and weights according to their genetic potential. Most had no blood pressure problems, although some showed early hypertension. Since all were ventilated at birth, the study was also interested to assess lung function. It found that most had lung function within normal limits, although a number of the group had breathing difficulties. Those who smoked had significant (but not irreversible) lung damage, a higher number than their smoking non-premature peers.

Deborah Davies is a psychologist who has worked with parents of babies in NICUs. She writes of the difficulties in making decisions about whether to continue life support for very premature babies. Deciding whether to actively resuscitate a baby where the prognosis is uncertain is even more traumatic. Some parents decide that the prospect of their tiny baby suffering from aggressive medical intervention is too much to contemplate. “The urge to protect and hold onto your baby at all costs can be so strong,” Ms Davies says, “and yet, your sense of ‘what is best for my child’ prevails upon you to give your child wings. This takes a lot of courage, faith and love.”

Allison W* underwent four years of fertility treatment before she discovered she was pregnant with twins. Her excitement was short-lived: she spent three months in hospital with bleeding problems and went into labour 23 weeks into the pregnancy. Her twins were born by caesarean section at 26 weeks’ gestation and were among the 70 per cent of babies born weighing less than 1000g who now survive. Allison and her husband, Ben, celebrated every passing week. They tried to prepare themselves for the possibility of saying goodbye to a son, Zachary, who they had not even held. He had breathing problems, haemorrhages, infections and difficulty being weaned from the ventilator.

Their daughter Elysse made better progress, from the NICU to the Special Care Nursery, and was discharged from hospital on day 78. The elation of taking home their daughter was dampened by the knowledge that their son needed more time in the hospital before discharge was possible. Zachary was finally discharged from hospital on day 100. He has mild asthma, some hearing loss and slight plagiocephaly (an asymmetrical-shaped head), which is now resolved. Elysse has mild cerebral palsy, which resulted in some motor delay. She is also long-sighted and has started wearing glasses. Allison was simply happy to have two happy and healthy two-and-a-half-year-olds.

Interestingly, when Allison attended her local new-mothers group after the twins were discharged, she found that although the mothers in this group were very supportive, the gap between her experience and theirs was enormous. “Some of them were anxious about their child liking a particular toy,” she says. “I was anxious about changing my son’s oxygen mask.” So, along with some other mothers she met at the NICU, she started Life’s Little Treasures a support group for parents of premature babies that also holds monthly playgroups.

“Zachary and Elysse have touched the hearts of so many people,” Allison says. “They spent the first three months of life-fighting with every bit of strength to stay alive. Since their birth, our outlook on life has changed. We now have a clear understanding of what life means. Material things do not make you lucky in life; it is every breath that we take unassisted, and the time that we spend with loved ones, that makes us the luckiest people in the world.”

Cathy Watson is a midwife and Maternal & Child Health nurse currently working in the area of women’s health.

Helping A Family With A Premature Baby

Friends and family are often at a loss to know what to do when a baby is born very premature. This can have a devastating effect on the parents. Parents of newborn premature babies can still be excited and delighted at the arrival of their child, as well as being worried about their future. One mother comments on the silence that met her phone calls announcing her baby’s premature arrival. Congratulatory messages were laced with sympathy and people stayed away, unsure of what to say. Such reactions add to the new parents’ sense of isolation in this bewildering new world.

Here are some things you can do to help new parents of premmie babies: