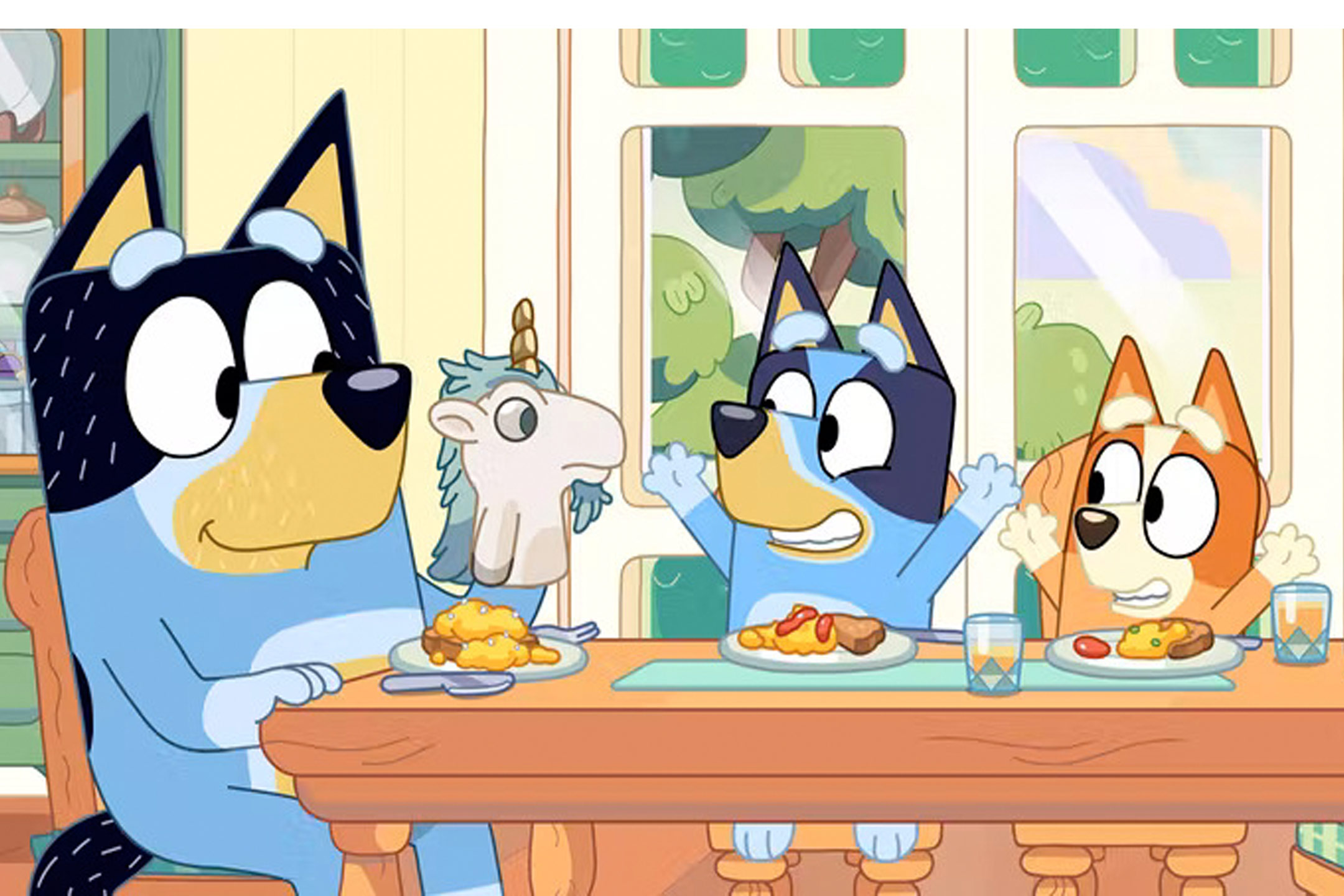 28 Jun Everyone loves Bandit from Bluey…

Posted at 12:01h in Validate by Staff

– but, asks David Burton and Kate Cantrell, is he a lovable larrikin, or just a bad dad?

Bandit Heeler is a hero.

The cartoon father of Bluey and her younger sister Bingo, Bandit is the much-loved dad dog at the heart of Australia’s favourite four-legged family. He balances the drudgery of housework with the creative escapades of his daughters, repurposing everyday objects and actions for imaginative play and engagement.

Awarded a Father of the Year award in 2019 and widely cited as the model of modern fatherhood, Bandit’s engaged presence in his daughters’ lives has been hailed as a watershed moment in children’s television.

In a break from TV’s “bad dad” trope, Bandit has been worshipped as a “dad-idol”, even inspiring a Facebook group of 14,000 dedicated dads who identify as Bluey superfans.

Child psychologists have explained how Bandit inspired their approach to pretend play and improvisation. A new article published in The Journal of Paediatrics and Child Health lays out “what Bluey can teach us about parenting and grandparenting”.

But there is a darker side to this lovable character.

Bandit never strays far from the reductive stereotype of the Australian larrikin: the likeable roguish male stuck between childhood and adulthood whose disrespect of authority and rough-and-ready masculinity reflects Australia’s emotional attachment to the working-class underdog.

A familiar breed of larrikin

It is difficult to overstate the cultural power of larrikin ideology in Australia.

Generally regarded as a sign of authentic, rugged masculinity and anti-authoritarianism, the figure of the larrikin has been co-opted for car and beer adverts, international tourism, and even conservative politics.

Today, the image of the larrikin has been sanitised for public consumption; however, the history of larrikinism is firmly rooted in Australia’s colonial literature.

The original larrikins of the late 19th century were young urban mischief-makers who sometimes ventured into serious violence and crime.

At the turn of the century, these transgressive characters were endowed with hearts of gold in outback drama and literature. In some cases, they were domesticated, as was the case for Dad and Dave from Steele Rudd’s On Our Selection (1899).

Rudd established the family dynamic that would be replicated in a multitude of Australian dramas, from Kingswood Country (1980–84) to The Castle (1997) to Bluey: energetic and inexhaustible children, a long-suffering sensible wife and a larrikin father who knows how to play to an audience.

From this mythos, we see the birth of Bandit: the underdog who knocks authority, mocks pomposity, and regularly breaks the rules to get what he wants – even resorting to cheating when he can’t outsmart or outpace his children.

In one episode, Bandit holds Bluey back from the finish line so he can win an obstacle course. In another, he lauds victory over his younger brother, Stripe, taunting that “big brothers always beat little brothers” – a jibe Bluey imitates when she teases Bingo: “Big sisters always beat little sisters. That’s just the way it goes.”

Even Bandit’s name conjures up the small-time crimes of bushrangers, Australia’s revered outlaws who also achieved a type of perverse folk hero status.

Undoubtedly, Bandit’s larrikinism contributes to his likeability: he is an entertaining and engaged father who is heavily involved in his childrens’ lives.

Occasionally, however, we catch a glimpse of Bandit’s darker side, with his playful teasing of his young daughters sometimes devolving into bullying.

In one episode, Bandit agrees to open Bingo’s ice block before repeatedly licking her frozen sweet in front of her. Afterwards, Bandit apologises to his daughter for being “a bit mean”.

While the show itself restrains judgement, often it is Bandit’s wife Chilli who pulls him into line. When Bandit forgets to pack sunscreen and snacks for a swim at the pool, it is Chilli (the “boring” parent, in Bandit’s words) who saves the day.

Yet it is Bandit who is praised for his parenting prowess, while Chilli is figuratively and literally in the background. In fact, the creators of Bluey were recently accused of mother-shaming when they described Chilli as “falling a bit short” due to her status as a working mum.

The universal veneration of Bandit is perplexing since, in situations like at the pool, he comes across as a mildly incompetent caricature, lampooned as an overgrown child in need of regular supervision and training.

Bandit is also surprisingly conservative when it comes to gender values.

Bandit is a “traditional” man who wishes to be viewed as the head of the Heeler household. When he reluctantly submits to wearing make-up, he is subsequently mocked by his mates for doing so. He censors himself from engaging in full imaginative play when under the gaze of other men. He teases his wife on the pains of pregnancy and labour.

Taken individually, most of these moments are punchlines. But over the course of three series, Bluey creates a complex portrait of Australia’s favourite dad. Bandit is present and playful, but he is still a larrikin at heart. His continued popularity, despite his personal shortcomings, only speaks to the stereotype’s strength in contemporary Australian life.