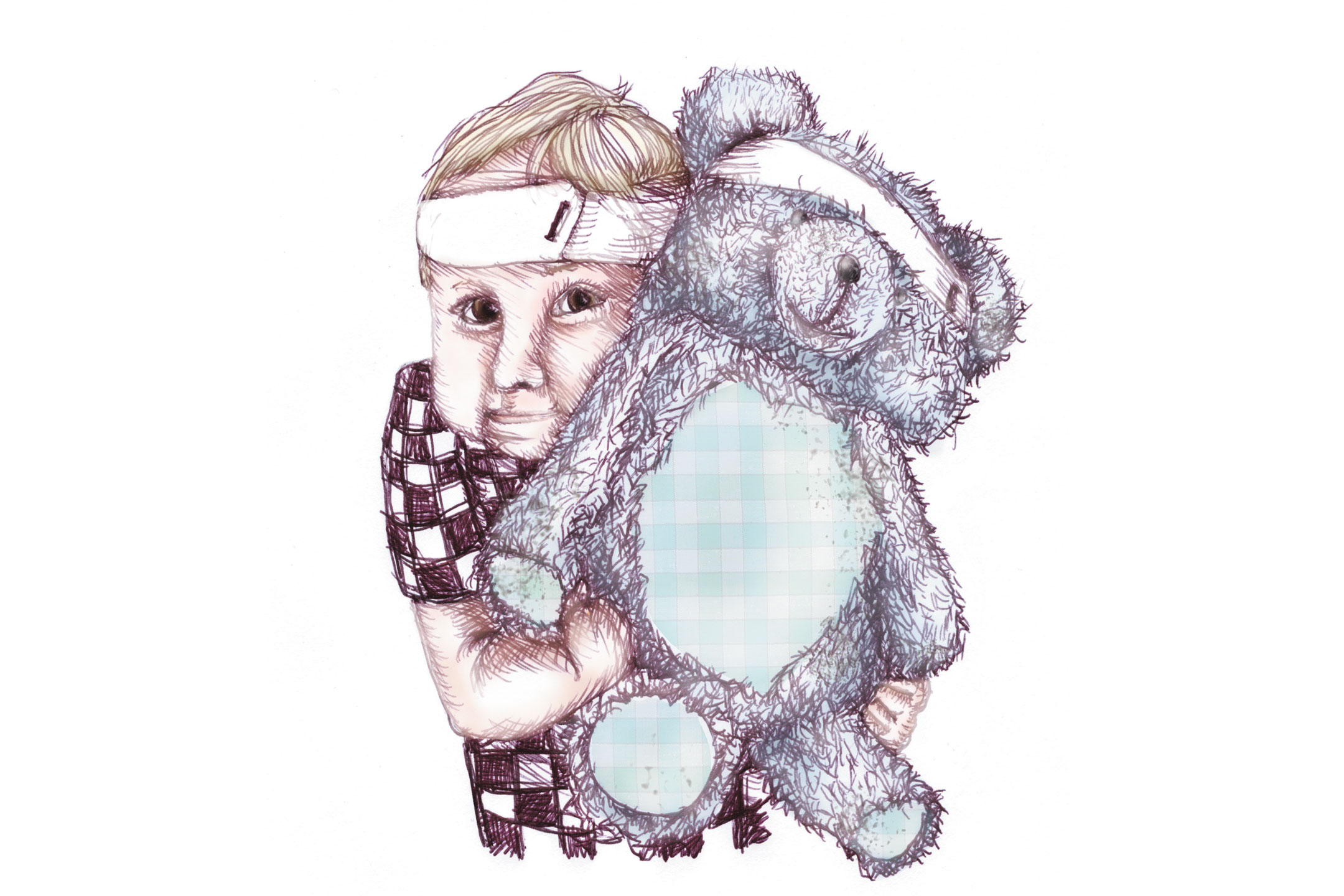 Posted at 15:42h in Inform, Inspire by admin

As she deals with her son’s diagnosis with a brain tumour, Lisa Cole concludes we all need to believe in something or someone.

Why is it that when you really need something it’s suddenly hard to find? I’d been searching for Coco everywhere that night, but was starting to wonder whether even my son’s favourite soft toy would be able to comfort him.

It wasn’t the first time Coco had gone missing. He once found his way into the lost-property basket at my daughter’s school. After retracing our steps, I walked frantically into the office with my distressed son. I didn’t even need to say what was wrong. The receptionist held up Coco and said, “I thought you might come. He looks very well loved.” On that occasion, my son’s tears disappeared as quickly as they had started, but on this particular night, he hadn’t even uttered Coco’s name.

After hours had passed with my son’s sobs still not softening into whimpers, my husband took him to hospital. I knew he had a better chance than me at getting the answers I had been looking for since Maximus was one day old and my maternal instincts first whispered to me that something wasn’t quite right.

At six weeks old, Maximus was diagnosed with reflux and I was told many things, such as, “he will grow out of it” and “not every baby is easy”. The gastroenterologist even commented that “he is a perfect specimen” and “I should make some more”. At the age of two, his reflux had settled, but he was not growing very well. By this time we also had another son, Xavier, who at less than 12 months old was almost the same size as his big brother. The search for answers had been futile.

Maximus and my husband had been gone for hours. I was feeling very uneasy but told myself the hospital was probably just busy, and they would soon be home with the diagnosis of an ear infection and some antibiotics. I had also been in denial that morning when Maximus awoke and for the fourth day in a row immediately threw up a yellow liquid. At first, I thought maybe he was coming down with gastro or that the dreaded reflux had returned.

I could barely understand my usually composed husband through his tears, and even when I heard the words “brain tumour”, they still did not make sense to me. These two words do not belong in the same sentence as your child’s name.

While I was waiting, I did what they say you should never do, and googled his symptoms. The first result was a story about a little girl with a brain tumour. I had noticed in the past few months that Maximus would occasionally hold his head and scream out at his big sister, “Amber hurting me”. I thought he might be experiencing headaches, but paracetamol didn’t seem to help, so I put it down to the way a two year old deals with frustration.

After reading the little girl’s story, I started feeling very guilty, and my maternal instincts were screaming, not whispering. The phone finally rang at 2am. I could barely understand my usually composed husband through his tears, and even when I heard the words “brain tumour”, they still didn’t make sense to me. These two words do not belong in the same sentence as your child’s name.

I dropped the phone and walked to my son’s empty bed. Peeking out from under the covers was a filthy blue face with faded black eyes. I’d finally found Coco. I curled up on the bed and cuddled him, and in my mind, I found God (any God willing to listen) and made a deal with him. I prayed he could somehow transfer the tumour to me. At the hospital, my husband (who had rediscovered his Catholic upbringing) was praying for exactly the same thing.

As a parent, it is scary to suddenly feel so powerless, to lose the ability to kiss away the ‘ouchies’. But then I realised, even at that ungodly hour, there was something I could do. While my aunty looked after our other children, I drove to the hospital with Coco in the passenger seat. Maximus was so happy to see him, and for a moment I felt like his saviour. He was in pain, but with his little friend next to him, he finally drifted off to sleep. I don’t think it matters what age we are, we all need to have faith in something – or someone.

If you are going to get a brain tumour, this is the one you want

I found my ‘someone’ the next day when the neurosurgeon came to the hospital room. He appeared before us in pale blue scrubs, and we stared at him in complete awe, eyes full of hope. He told us that from looking at the scans, he suspected our son had a cerebellar astrocytoma, a common brain tumour in children. “If you are going to get a brain tumour, this is the one you want,” he told us. He suspected the tumour was not malignant, but couldn’t say for sure. He didn’t want us to put our faith in him completely, but we had to believe.

The next day our son was wheeled away for surgery, and we were sent to the waiting room. For seven hours we sat in limbo. The room was full of solemn faces, but nobody spoke except when a surgeon walked in to deliver news to a waiting family. Then there would be cries of relief or primal moans of grief. I held on to Coco and the hope the neurosurgeon had left us with. Then it was our turn to receive news. Maximus had made it through and was in recovery.

“Where’s Coco?” we knew we had our son back.

We went in to see him, not really knowing what to expect, but when he slowly opened his eyes and whispered, “Where’s Coco?” we knew we had our son back. The first few days of recovery were really rough, but once again his little friend stayed right beside him, and a nurse even wrapped a matching bandage around Coco’s head. Two months later Maximus was released. I didn’t know how to thank the neurosurgeon, so I just hugged him.

One of the first things we did when we arrived home was put Coco in the washing machine. After all the comfort he gave our son, it was the least we could do. Then I grabbed a permanent marker and coloured in his fading eyes.

Not long after, Maximus was baptised. As I watched the holy water trickle over my son’s fading scars, I felt enlightened. I had found faith again, in something, or someone, and if they ever come to collect on that deal, there will be no complaints from me.