Posted at 13:49h in Editors Picks, Validate by Editor

If you believe the promos, there has just been a “groundbreaking” new program on Channel Nine. This is Parental Guidance, a reality program promising to “change the conversation about parenting”. 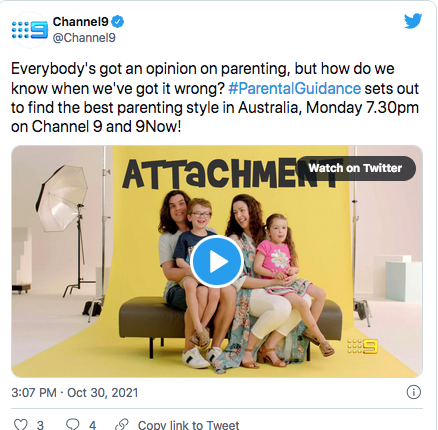 The show, hosted by parenting expert Justin Coulson and Today presenter Ally Langdon, involved ten sets of Australian parents with different parenting styles. They were put through a series of challenges to decide whose style is “best”.

The show, which finished just finished, was a ratings success, amid episodes dealing with screen time and smacking. But is it helpful?

Parents have always been ‘told’

If we look back at the history of parenting approaches, we see the idea there is a “right” way to raise children is not new.

In the 1920s and 1930s, experts such as Frederic and Mary Truby King and John B Watson devised routine-based, authoritarian approaches. Amid a push to reduce infant mortality, they emphasised nutrition, fresh-air and discipline. They warned against the “dangers of too much mother love” and encouraged parents to trust the experts and focus on meeting developmental milestones, rather than bonding.

Then, in the aftermath of the second world war, Benjamin Spock broke from the idea that children need schedules and little affection. Rather than disciplining children, he advocated understanding and paying attention to children at each stage of their development. Spock, such as other prominent experts like Mary Ainsworth and John Bowlby, emphasised the emotional needs of children and the importance of physical parental affection.

Advice in the late 20th century

Between the 1970s and the end of the 20th century, the trend towards a “child-centred” parenting style continued, led by British psychologist Penelope Leach and attachment-parenting experts Bill and Martha Sears.

But by the end of the 20th century, there was dramatic growth and variety of child-rearing advice – and no one overriding group of experts. Perhaps this reflected changing families, different family structures, more mothers in paid work and more fathers involved in childcare.

However, the advice was often contradictory. On the one hand, there was Gina Ford with her strict routine for producing a “contented little baby”, while Hollywood nanny Tracy Hogg emphasised listening to a babies cries and “tuning in to their body language”.

So much advice – but you can ignore it

In Parental Guidance, the parenting styles were tested or compared by experiments like, whether kids will go with a (pretend) stranger. Or how will they cope in a fancy restaurant. But it also looked at “how do you encourage them to set high goals?”

There has always been pressure, especially on mothers, to produce a perfect outcome for their children. But parenting advice today has moved from simply feeding, clothing and disciplining a child to creating well-rounded and “successful” adults. This shift in focus from the child to parent is reflected in language: child-rearing advice is now “parenting” advice.

But does the plethora of often-complex advice today increase the pressure on parents? My own research suggests it does not.

While many women owned a copy of Spock – or were at least aware of its message – they didn’t necessarily use it. Some did say they used it “until the pages fell out,” others declared “it was a load of rubbish” and described how they listened more closely to the advice of friends and relatives.

That is, parents – and mothers in particular – are able to draw a distinction between “expert advice” and their own, individual family situations.

How do you really know?

Where does that leave television programs like Parental Guidance, which seem to suggest there is a “best” way to raise your children?

It may make for compelling TV, but parents need information not pressure to conform to an idealised parenting method. And it’s not as though we know for sure what is “best” anyway.
One woman I interviewed for my research, is in her 80s and raised four children in the 1950s. As she told me after a four-hour interview:

you hope that they’re good adults, and that you’ve done your work with them, but how do you know, how do you really know?

Ideas about how we should parent come at a period when parents are vulnerable and looking for guidance. They shape the parent as well as the child and the emotional impact of these powerful messages can last a lifetime.

Rather than competing for “Australia’s best parenting style”, Spock offers gentler advice for parents of any era:

Trust Yourself. You know more than you think you do.