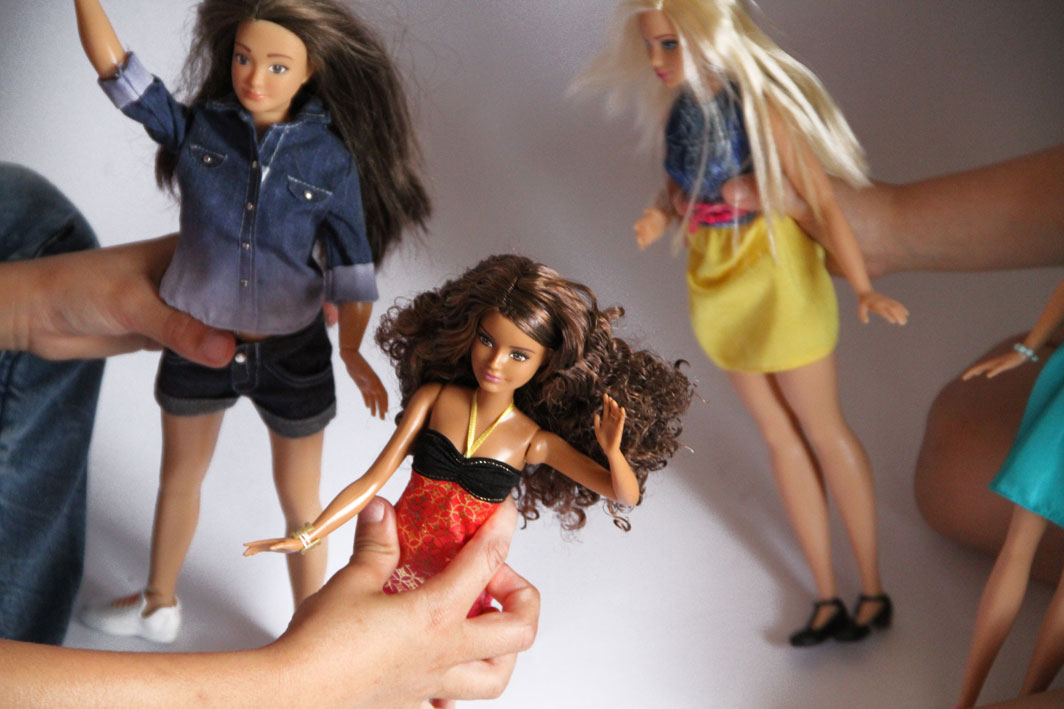 Posted at 19:30h in Validate by Guest Contributer

Bron Bates weighs up the joys of imaginative play against a legacy of limited representations of femininity.

When I was a kid, I loved my Barbie dolls. Crystal Barbie, Peaches ‘n Cream Barbie, Great Shape Barbie. Dressing them, switching up their outfits, giving them occupations and babies and taking them on adventures (and to aerobics class). I loved it all.

In 1980s suburban Sydney, blonde, white and slim were the things to be.

I didn’t really question why Barbie looked the way she did. In 1980s suburban Sydney, blonde, white and slim were the things to be. From Barbie to Christie Brinkley to the standard baby doll on the toy shelf – dolls, models and movie stars were mostly blonde, blue-eyed and white. And they looked nothing like me.

The only dolls that looked remotely similar to a little half-Asian girl were clunky ‘exotic’ collector dolls, or cheaper plastic generic dolls that none of the other kids played with. There were no cool or glamourous Asian Barbies with hazel eyes and dark hair. There was no variation from the skinny, voluptuous blonde. She was the norm by which the beauty standard was set by.

Fast-forward to parenthood and I was faced with making toy choices for my own kids. I considered Barbie again.

My first two children were boys and, as I wanted to give them non-stereo-typical gendered play options, each had their own Barbie doll. My first son barely gave the doll a second glance, while my second son picked out the pinkest, sparkliest doll he could find.

But when I had a daughter, I was more conscious of what the doll may represent to her as a girl. Its unrealistic body shape, homogeneous never-ending whiteness, and the dubious messages in the Barbie marketing made me uncomfortable.

I was more comfortable with the Lammily doll. With her more realistic body shape, brunette locks, a back-story of some substance (she’s a world traveler) and being independently crowd-funded by people like myself, I figured she was the perfect choice for my daughter.

This year, Mattel, no doubt keen not to be left behind in the doll race, introduced it’s own new line of Barbies in slightly different shapes and sizes. child mags blog was sent three of the new dolls and Karen and I introduced them to our kids to see what they thought.

I brought ‘tall’, ‘petite’ and ‘curvy’ Barbies home and set up them up alongside Rose’s Lammily doll. The kids pounced on them. They launched immediately into imaginative superhero games together (they’ve been looking forward to the DC Comic super hero dolls, also by Mattel, being released soon). Max favoured the blonde curvy Barbie as she was the closest in looks to Super Girl, and called her Ella. Rose chose the brunette petite Barbie who looks a little like Bumblebee, and called her Azzabella.

So, it turns out the new Barbies have worked their magic on the kids and me just as Mattel intended them to.

We’re still fans of the Lammily dolls (we’re on the super loyal fans mailing list to receive the Lammily boy + Photographer Lammily package being released in November 2016), but I’ve hesitantly accepted Barbies back into the fold.

I don’t know how truly different these new dolls are, but their different sizes and colours make for a good start. And having my kids wander off together into imaginary worlds of their own, creating and dreaming up stories, currently outweighs my concerns about Barbie’s symbolism as an unrealistic icon.

How will they feel about Barbie when they grow up? We’ll see.

Words and Photography by: Bron Bates