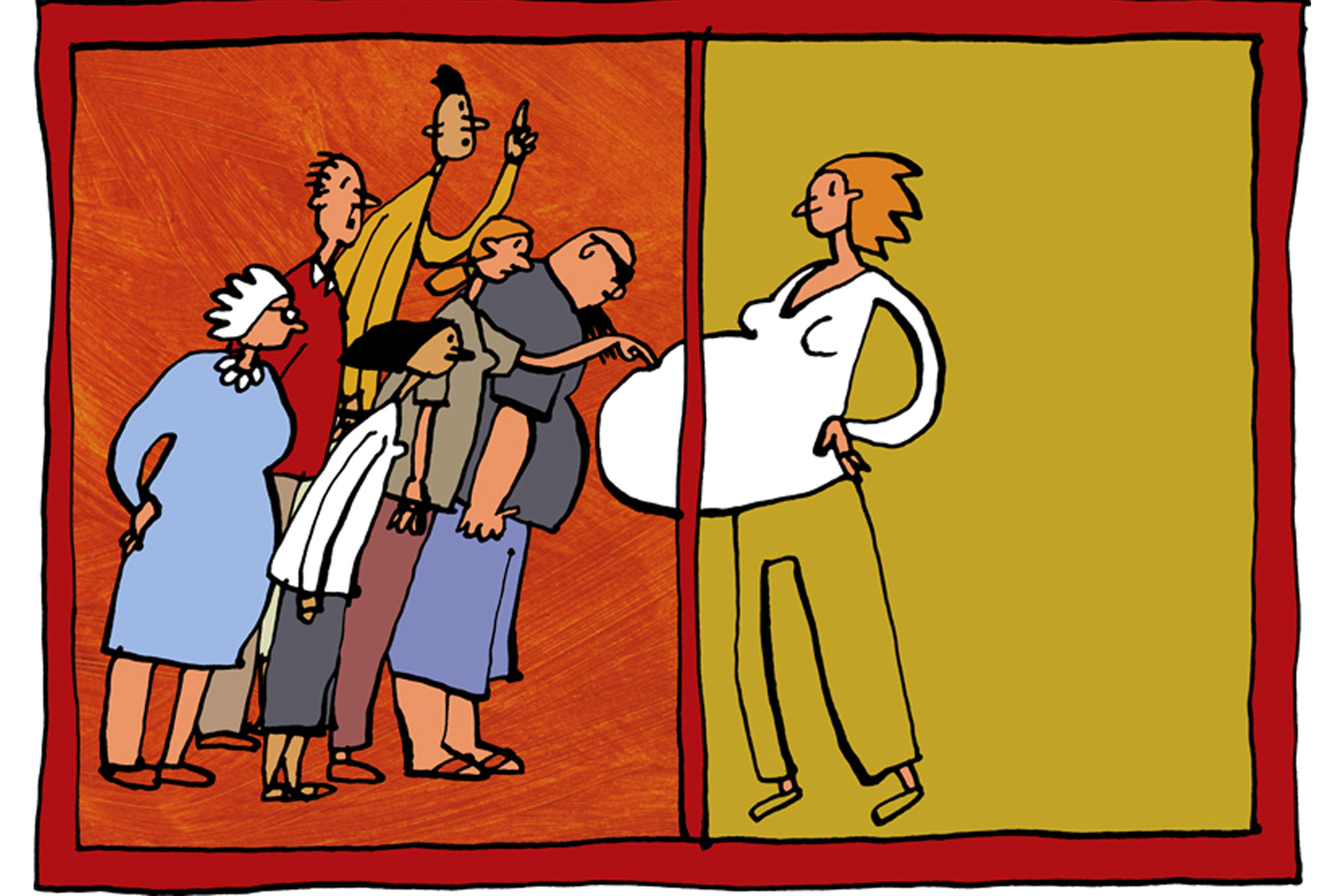 12 Nov In The Public Interest?

Posted at 11:33h in Celebrate, Editors Picks, Motherhood by admin

The village is most welcome to help raise her child, writes Maxine Clarke, but through practical gestures, rather than unconstructive heckling.

For a few short months, I was completely content with the new-found public interest in my condition. Even a few pats on the tummy from well-meaning strangers didn’t faze me.

Becoming Public Property starts out all bus seats and freebies, and ends up… well, it doesn’t end.

There are some things you’re prepared for as a first-time mother-to-be. Facets of motherhood you anticipate, not quite with dread, but with a shrug of resignation. The sleepless nights, the milk-stained shirts, the post-baby potbelly and the like. Then there are those significantly less tolerable, unforeseen parts. Like not being able to wear dresses all summer because you need two-piece outfits for discreet breastfeeding. Or the well-meaning, but persistent (and somewhat madly obsessive) tug-of-war between family members you used to see once a month, and who now insist on bi-weekly baby visits. These facets of parenthood are those that, in the hazy blur of sleep-deprived, milk-encrusted hindsight, you realise you should have foreseen before the birth. But the most bewildering of these is suddenly becoming Public Property. Becoming Public Property starts out all bus seats and freebies and ends up… well, it doesn’t end.

I quite clearly remember reaching the middle of my fourth month of pregnancy. I was finally showing enough that over-polite friends and colleagues didn’t stare in silence at what they considered to be the result of severe Easter-holiday overindulgence. The pregnancy perks seemed endless. I never had to worry about getting a seat on a bus or a train, even in peak hour. The waitress at the coffee shop next door to my workplace was always slipping little extra treats into my lunch bag “for the baby”. My boss even let me off half an hour early on several occasions because I looked “a little tired”.

I realised that becoming Public Property wasn’t all perks and privileges.

For a few short months, I was completely content with the new-found public interest in my condition. Even a few pats on the tummy from well-meaning strangers didn’t faze me. I was at the end of my fifth month of pregnancy by the time I realised that becoming Public Property wasn’t all perks and privileges. My mother-in-law, (well-meaning, of course), started dropping none-too-subtle hints about the exercise classes she used to attend at the Women’s Health League when she was pregnant with my husband 40 years ago. Or the strict diet her doctor kept her on so she didn’t gain too much weight during her pregnancy. I was rather large for the fifth month of pregnancy. But I was eating well and exercising regularly, so I simply ignored the comments. Shrugging them off for the fourth time was becoming rather difficult. Then one morning, I was in the lift on my way to work, and a near-stranger who worked somewhere in the same building smiled at me, (with one of those ‘you’re pregnant and big-bellied and therefore cute in a comical, endearing way’ smiles), and asked me when I was due. When I replied that I had three months to go, her face fell and she gasped and stared at my stomach (with one of those ‘what kind of freak elephant-child are you harbouring in there?’ stares), and said, “Geez! But you’re huge already! I really hope you’re going to be okay.”

I reassured myself that it would all turn out fine – that I only had three months left. Then all the public scrutiny would be passed on to the next poor lot of surprised, expectant mothers. Not so. At my baby’s four-week check-up, my happy and thriving son had doubled his three-kilo birth weight. Yet the nurse at the early-childhood centre informed me that he was too fat. She went on to tell me to stop feeding him so often (I was breastfeeding on demand), because I would overload his heart. This piece of advice had me in tears. My GP later assured me that I could ignore it because it was “sheer lunacy”.

When my son was two months old, he started sucking his thumb. He’d just discovered his hands, and with his infant motor skills, it took him about half an hour to manoeuvre them into his mouth. After such a mammoth effort, he was reluctant to take his fingers back out of his mouth for at least 10 minutes. My husband and I found the whole process hilarious. But my son’s grandparents and a large cross-section of the general public didn’t. Apparently, sucking his thumb would become a long-term habit. One that would lead to schoolyard teasing and long-term emotional problems when he was older. My son’s gums would be pushed out of shape, which would result in pushed out teeth and years of expensive orthodontic treatment. Besides, my son was only sucking his thumb because my husband and I had deprived him of a dummy (my husband and I had made a deliberate and informed decision not to give our baby a pacifier).

Public transport produced real gems of advice: “He’s too hot, dear,” from an elderly woman on the bus, on a 25ºC day when my son was wearing only a singlet and a nappy and looked perfectly content. “He’s hungry love. Give him a feed,” from the bus driver when the baby let out the tiniest whimper (he’d been fed at the bus stop before we boarded the bus).

When my son was five to six months old, and we let him cry himself back to sleep at night (checking on him every so often) to encourage him to ‘sleep through’. A lot of people considered us “hard-hearted”. Some friends insisted that even a six month old should be picked up every time he cried, or he would feel abandoned. The advice was endless: we weren’t mashing our son’s food enough; we should have stopped swaddling him by now; he was too old to still be breastfeeding; if we didn’t support his legs better he would become bow-legged; even the occasional drink of fruit juice would rot his baby teeth; we shouldn’t be taking him swimming because the chlorine would make him sick; and so on…

I suppose one has to anticipate a certain amount of input from immediate and extended family, medical practitioners, and others from whom an opinion is actually sought. But it’s the advice from the butcher, the checkout assistant, the woman sitting next to me on the bus and the swimming attendant at the pool… There’s an old saying that ‘it takes a village to raise a child’, and I’m all for community. If the butcher wants to come over and make my son his breakfast at five or six o’clock every morning and leave some free chicken mince for his lunch, he’s most welcome! I’ll copy him a key and he can let himself in so I can have a lie-in. If the bus driver wants to pop in and pat my son back to sleep at midnight when he wakes, I’ll hook him up to our intercom; or, better still, he can assist me in campaigning for more pram-friendly buses. The village is most welcome to help me raise my child, but through practical gestures, not through unconstructive heckling.

As for my mother’s advice? She thinks it’s all hilarious. “You’re doing a great job,” she assures me. “Your child is happy, good-natured, sociable and charming. He eats well and sleeps through the night and can do everything he is supposed to do at his age. If you change your parenting methods, you will change him. He won’t be your child any more.”

It took a village to unsettle this mother, and just one good parent to reassure her.