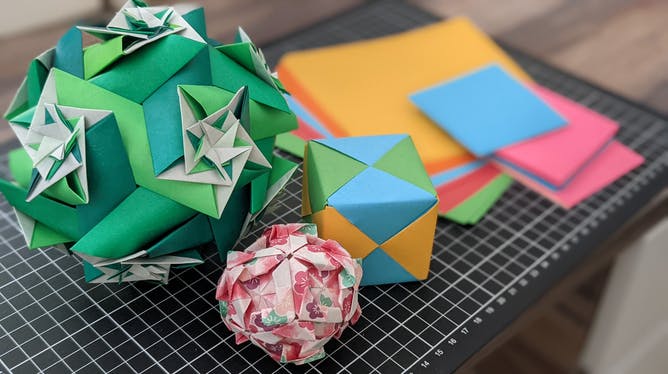 Posted at 11:55h in Inspire by Editor

Both activities, however, share similar skills: precision, the ability to follow an algorithm, an intuition for shape, and a search for pattern and symmetry.

The ‘building blocks’ of origami models

As a geometer (mathematician who studies geometry), my favourite technique is modular origami. That’s where you use several pieces of folded paper as “building blocks” to create a larger, often symmetrical structure.

The building blocks, called units, are typically straightforward to fold; the mathematical skill comes in assembling the larger structure and discovering the patterns within them.

Many modular origami patterns, although they may use different units, have a similar method of combining units into a bigger creation.

So, for a little effort you are rewarded with a vast number of models to explore.

My website Maths Craft Australia contains a range of modular origami patterns, as well as patterns for other crafts such as crochet, knitting and stitching.

In mathematics, the shapes with the most symmetry are called the Platonic solids. They’re named after the ancient Greek philosopher Plato (although they almost certainly predate him and have been discovered in ancient civilisations around the world).

The Platonic solids are 3D shapes made from regular 2D shapes (also known as regular polygons) where every side and angle is identical: equilateral triangles, squares, pentagons.

While there are infinitely many regular polygons, there are, surprisingly, only five Platonic solids:

To build Platonic solids in origami, the best place to start is to master what’s known as the “sonobe unit”.

A sonobe unit (sometimes called the sonobe module) looks a bit like a parallelogram with two flaps folded behind.

I’ve got instructions for how to make a sonobe unit on my website and there are plenty of videos online, like this one:

Sonobe units are fast and simple to fold, and can be fitted together to create beautiful, intriguing 3D shapes like these:

You will need six sonobe units to make a cube like the yellow-blue-green one pictured above, 12 to make an octahedron (the red-pink-purple one), and 30 to make an icosahedron (the golden one). (Interestingly, it’s not possible to build a tetrahedron and dodecahedron from sonobe units).

Into the mathematical rabbit hole

Once you’ve mastered the basic structure of each 3D shape, you may find yourself (as others have done) pondering deeper mathematical questions.

Can you arrange the sonobe units so two units of the same colour never touch, if you only have three colours?

Are there relationships between the different 3D shapes? (For example, the icosahedron is basically built of triangles, but can you spot the pentagons lurking within? Or the triangles in the dodecahedron?)

One seemingly innocent question can easily lead to a mathematical rabbit hole.

Questions about colouring will lead you to the mathematics of graphs and networks (and big questions that remained unsolved for many centuries).

Questions about larger models will lead you to the Archimedean solids and the Johnson solids. These 3D shapes have a lot of symmetry, though not as much as the Platonic solids.

Then, for a truly mind-bending journey, you might land on the concept of higher-dimensional symmetric shapes.

Or perhaps your questions will lead you in the opposite direction.

His models include segmented tarantulas and ants, stags with twisted antlers and soaring, feathered birds.

Robert Lang and others have also created crease patterns for use in new engineering contexts such as folding telescope lenses, air bags and solar panels.

My final example of the power of origami goes back to the cubic equation I mentioned at the outset:

Cubic equations relate to some “impossible” mathematical problems, such as trisecting an angle (splitting an arbitrary angle into three equal angles). Or doubling a cube (which is finding a cube with double the volume of a given cube).

Famously, these problems cannot be solved using the classical methods of a straightedge (ruler without the markings) and compass.

In 1980, however, Japanese mathematician Hisashi Abe showed how to solve all these problems using origami.

I am excited to see where mathematics and origami will intersect in future. Grab some paper today, make a few models and start your own journey of mathematical exploration.

This article is part of a series explaining how readers can learn the skills to take part in activities that academics love doing as part of their work.