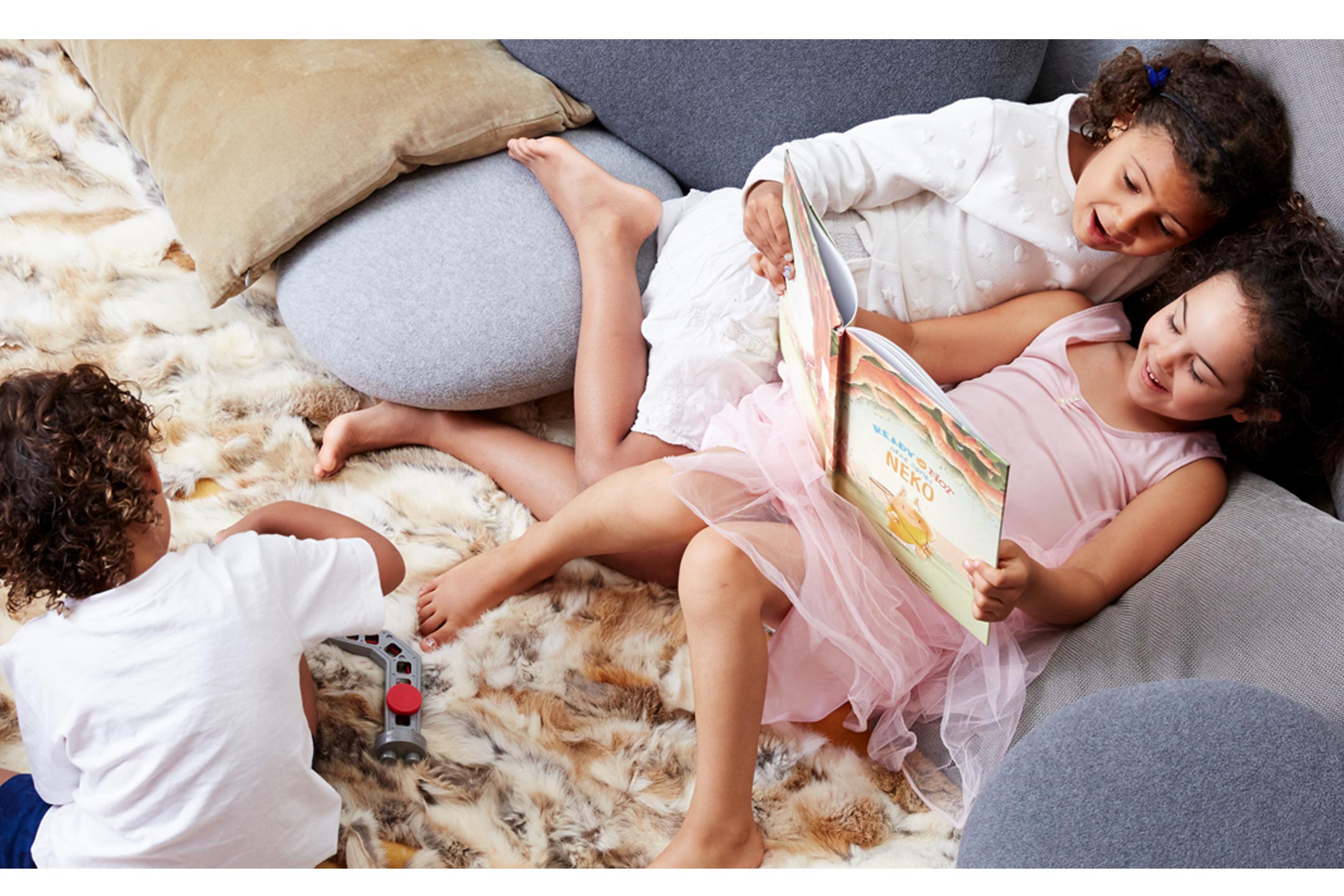 12 Nov Hello World this is Me… Linking Literature & Diversity

Posted at 12:37h in Editors Picks, Education, Inspire by admin

Keren Moran and her partner, two mums from New South Wales, couldn’t find enough quality books for their young daughter that illustrated families like hers. Some families have really important grandparents, some have twins or multiple kids, some live in big blended families. So she produced a book in which every kid would have a story about their own special family.

Imagine looking in the mirror and seeing someone else entirely. Or stranger still – gazing into a mirror – but seeing no one there at all! Sounds odd and unsettling. Yet this is one way to understand the experience of diverse kids (and I’ll unpack that little word: ‘diverse’ in a moment) looking, and not-finding themselves reflected back from the books they are reading as they grow up.

In the ‘lipstick experiment’, a seminal psychological experiment from the 70s, kids aged 6 – 24 months had a dot of lipstick applied to their nose and a mirror placed in front of them to see what they would do. All of the kids peered into the mirror with interest. Only the older kids (around the 24 months mark) touched their own noses in response to the lipsticked-nose in the mirror. These ‘older’ kids were beginning to understand. The baby staring back at them from ‘inside’ the mirror with lipstick on its nose was a reflection of them, not another baby behind the glass. They were beginning to develop a sense of self.

As kids grow, those first inklings of ‘self’ reflected in the mirror are progressively reinforced through wider experiences. As children socialise and see their increasingly complex selves reflected from the world around them and then capsulised and made sense of in the books they are read.

Except when they aren’t.

A rare consensus in developmental, psychological and educational circles today, the often embattled arena of child-rearing, emphasises the importance of early engagement with books as a fundamental stepping stone to all kinds of ‘things good’. Books translate experiences and help cement our early mental models of what life looks like and how we fit in.

A recent study shows that the number of books in a household are as much of an influence on a child’s future educational attainment as their parents’ level of education. What happens when kids cannot see themselves in the books that are meant to mirror their reality? When peering in to those so called ‘literary mirrors’ come back empty?

Every single person’s lived experience is a nuanced thing. The mix and mash of appearance, language, culture, place and family. To look at the majority of kids literature published today (not to mention hitherto) you would think that modern children growing up in western societies are primarily white, anglo, with two parents (a mother and a father) and perhaps a sibling and/or a dog. More likely than not they are also a boy and blonde for good measure.  Doesn’t sound like most of the kids you know? Because it isn’t. So when I say ‘diverse’ kid – really I am just referring to a deviation from a ‘norm’ that has long since shuffled.

My own experience growing up was that of a diverse kid. A queer kid in a ‘straight’ family, on a ‘straight’ street, in a straight town (as far as I could tell anyway). None of the books I read had anyone like me in them. My parents are genuinely progressive. So when I did eventually enlighten them in my late teens I was blessed with a smooth and accepting ‘coming out’ story.

At the height of the controversial marriage equality plebiscite here in Australia, author and actor Magda Szubanski really nailed my own childhood experience for me. She said “As an LGBTQI person, you’re a minority of one, within your own family. It is such a precarious feeling”. Thinking back I am certain my young evolving sense of self would have been better equipped had I found frequent, commonplace reflections of a me.

You could argue that ‘tribes’ are a lot easier to find these days. The internet for all its deep, dark potholes is also an avenue for young people to connect across geographical and societal divides. Very young children however are not (and for good reason!) allowed the freedom of movement in the virtual space. Their experience then remains much closer to home, so the greater the need for children’s books.

At their best, children’s books have the potential not just to mirror, but to provide windows to other’s experiences. As award-winning illustrator Christopher Myers says; books are also ‘maps’, laying the foundations for ‘an atlas of their world… of their possible destinations’.

At worst, the lack of representation can rob a child of the opportunity for the sense of self-love and worthiness that is evoked when they recognise themselves in their books.

I am raising my daughter in a ‘diverse’ family. We don’t know yet how she will define her own identity for herself. But we do know that some of the building blocks that form her identity do not conform to that questionable ‘norm’ so widely portrayed in most children’s books.

When she was very little (she’s now 7), we went looking for books that would reflect her ‘diverse’ family structure and subtly position her lived experience as one amongst the many possibilities. We discovered there aren’t actually that many at all. Literally just a handful dating back to the 80s. Swapping pronouns and genders on the fly as we read to her could only go so far, especially as she developed a keen sense of (misplaced if you ask me) propriety at an early age and could sniff out and police our attempts at changing the characters as written.

We decided the only thing to do was to create the books we couldn’t find – possibly an over zealous response! To make it all the more ambitious – we decided that rather than make a book to satisfy just our own family, we would create a book that could reflect ANY family for the children who lived in it. Our idea was to offer a book that could be personalised to have a girl or boy protagonist (non-binary characters are in development) with different family members swapped in and out based on members of the child’s family. 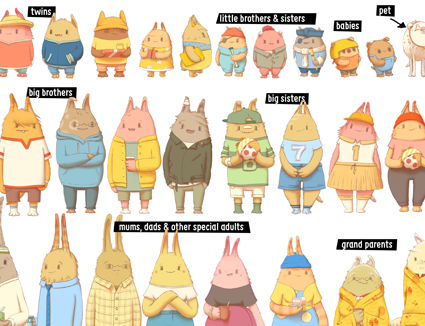 We also knew we wanted to produce a piece of quality literature. Not a vessel to shoehorn a child’s name and family into. To that end, we approached award winning children’s authors Kate and Jol Temple to work with us to develop the book, and the very talented Christopher Cooper to lavishly illustrate it.

In many respects it was perfect timing. Technology had finally propelled ‘print on demand’ to a place where you could feasibly produce high-quality hard or soft cover books ‘on demand’, alleviating the risks of high volume print and distribution, making independent publishing more viable than ever before. Also, personalisation had matured big-time. The idea of personalising a product, which just a few years earlier was perceived as a nice little quirk, has really come into its own. A recent research review into personalised kids books specifically by the National Literacy Trust in the UK has lauded personalising kids literature as an avenue to improved literacy outcomes for young children.

Fast forward 2 years, the first book from our independent press is available in Australia, the USA and Europe. Ready or Not here comes..Your KID is a warm tale about a kid who looks up from his/her toys one Sunday morning to find her/his family gone! It follows a romp around the house to find his/her family members and why they hid in the first place! The book can currently reflect over 12,000 family types and has been enjoyed by families of all shapes and sizes around the world.