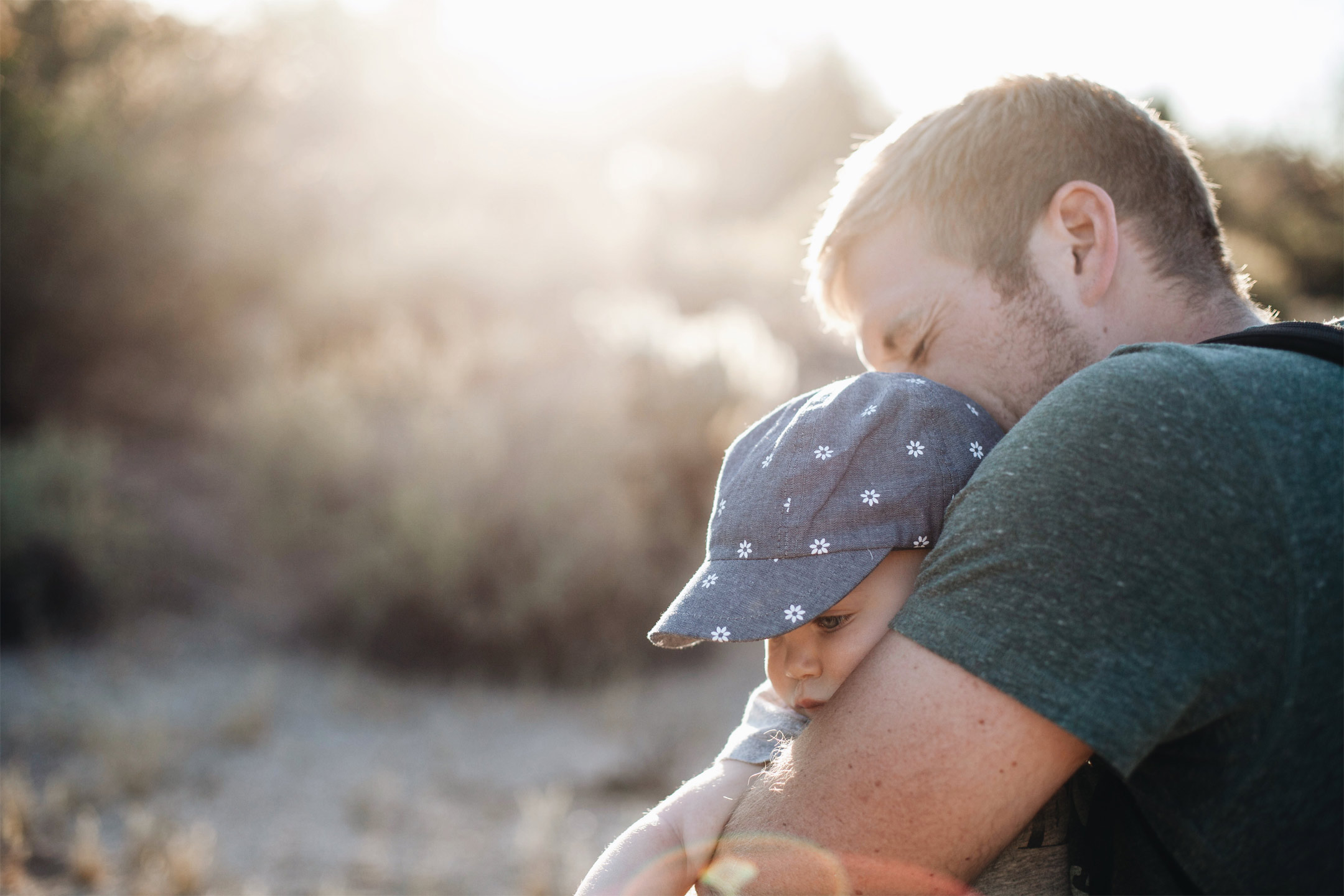 Posted at 16:22h in Editors Picks, Inspire, Validate by admin

Stepfamilies provide opportunities for men to review the roles they have adopted as partners, fathers and caregivers, argues Steve Martin.

Men face the challenge of looking into themselves for a sense of identity and strength rather than relying only on external, culturally prescribed definitions of their roles. For many men this is a big ask as it is an area traditionally defined as female territory and men’s memory banks of experiencing a father/nurturer may be limited.

I often think about some of the issues men can find themselves wrestling with in stepfamilies. Men often dive energetically into their new stepfamilies with the best of intentions and surface in bewilderment as their best efforts to ‘help’ are met with rebuffs, cold shoulders, wariness or rejection. What has gone wrong?

For both biological dads and stepdads, one common theme often emerges: the male role. We all absorb expectations of men or women as we grow up. For many men, these role expectations are as invisible as the atmosphere we breathe, but just as powerful. Take them away and we flounder. For example, traditional role expectations in our society are still for women to be primary caregivers for children and to take responsibility for nurturing adult relationships. All while men are providers and increasingly involved as ‘back-up’ parents. Take away a marriage or relationship, and many men find themselves in an unfamiliar role as the primary caregiver for their children, as well as being in the traditional provider role. Add a new partner, as 75 per cent of men do (more quickly than women) and what happens? 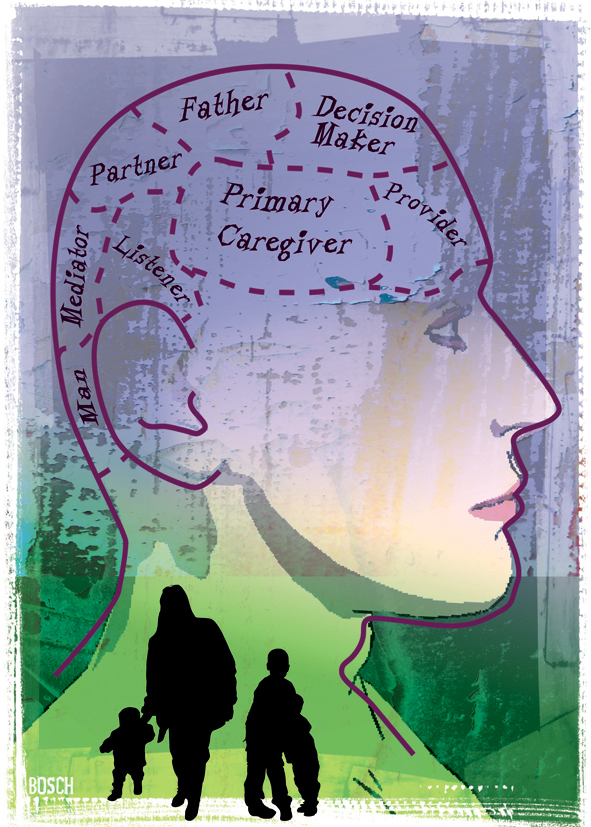 Judging by the many calls to the Stepfamily Association, many dads and their new partners expect the female partner to take over the role of primary caregiver, thereby ‘releasing’ dad to his traditional provider and back-up caregiver role. Conflict arises if the children miss the closeness with their father or if dad’s new partner embraces her new role of nurturing and discipline in a way the children and the dad object to. She can feel set up, undermined and isolated.

On the other hand, conflict may arise if the new female partner, quite justifiably, rejects her partner’s invitation to fulfil the traditional role as primary caregiver to children she barely knows, when they already have a parent – their father – to care for them. From the man’s perspective, this is a very different role from that which he’s learnt to expect. It doesn’t feel natural for him either.

Dad may feel very under-qualified to be caregiver. But it’s his job while the kids are with him unless he can negotiate a job-share arrangement with his partner. Did I say ‘negotiate’? That’s another skill that traditionally has been cultivated by caregivers. Men may feel they have to learn on the run.

While juggling the competing demands of work and childcare is no doubt difficult to say the very least, dad and his new partner need to: acknowledge this is new territory for them that requires conscious effort to carve out mutually acceptable roles, rather than assuming either parent will take up a particular role; ensure that dad maintains some significant time with his children on his own; and that both work together as a team, with dad clearly delegating his parental authority (‘When I’m not here, Judy is in charge’), publicly supporting his partner’s actions with the children and discussing differences about parenting styles away from them.

Dad is in another unaccustomed role: the connection between his new partner and his children.

Research suggests that many dads experience a strong sense of being caught or trapped in the middle: having to negotiate decision-making with their partners, mediate in conflict between their children and their partners, and help their partners find a role in the family. Dads may feel very alone with the responsibility of parenthood and uncomfortable with the conflicting demands of this role.

Tim described this sense of divided loyalties as “An enormous feeling of being caught, being trapped, of everything having to be negotiated. You feel you are striding along comfortably, then you trip. I refer to them as ‘trip-wires’ that you just don’t see until you trip over them and an explosion blows your leg off. It makes you hesitant about what you can and what you can’t do.”

This sense of aloneness can be heightened when a man’s experience of his own father is limited. Les described trying to remember his father as “like trying to reconstruct the basis of half a dozen still frames”. Many men (and women) report their fathers as distant and often absent because of work. In contrast, mothers are often experienced as closer and more influential role models for one’s own parenting style.

Dave decided early in his relationship with Julie that what her young kids needed was a firm hand with some clear rules.

Julie clearly had her hands full and let the children get away with too much. When Dave and Julie moved in together he would ‘sort them out’. There was no way he was going to live with kids running the show. Dave was astounded when not only the kids but also Julie objected to his full-on style. This example from Dave fits with the traditional male self-reliant, technical, ‘fix-it’ approach to problems. What can be useful in these sorts of situations is a readiness to learn from the strengths of the traditional female role, such as listening, a commitment to building relationships, connecting with the children, respect and trust. In other words, earning the right to have influence in the life of another rather than assuming it.

When stepfathers have not been parents themselves, their sense of a parenting role often comes from their own upbringing.

With no opportunity to update that model through children of their own, they can be caught in a time warp. This may find expression in frustration that their partner is ‘too soft’ on the children. This is one side of the picture and ignores the changes in parenting styles from one generation to the next.
Many men in stepfamilies combine the role of being a biological father whose children visit (as is the case in about 87 per cent of arrangements), with being a stepfather to their partner’s ‘live-in’ children. These men face the special challenge of developing an ongoing role in the lives of their stepchildren against a backdrop of having more limited opportunities to provide similar nurturing to their own children. It is vital in situations such as these that you make the most of whatever contact you can have with your own children. There is no easy answer to the sense of ongoing loss this produces, but it is important to acknowledge these difficult feelings and get support when you feel you need it.

The new structure of a stepfamily can provide encouragement to experiment with ‘doing it differently’ and rewards personal growth and openness to change. What emerges will result from a combination of influences: the man’s willingness to consider a change from being the traditional provider and back-up parent to being the primary caregiver; the man’s willingness or reluctance to share responsibility, to ‘let his partner in’; the partner’s willingness to take on practical and emotional caregiving tasks; the children’s willingness to accept caregiving from the stepparent. What is important is not the choice of roles adopted, but that the roles can be discussed and negotiated openly rather than assumed or taken for granted. This can be an uncomfortable but ultimately rewarding ride.

Men also face the challenge of looking into themselves for a sense of identity and strength rather than relying only on external, culturally prescribed definitions of their roles. For many men this is a big ask as it is an area traditionally defined as female territory and men’s memory banks of experiencing a father/nurturer may be limited. Openness to exploring this new sense of identity offers challenges and opportunities for personal growth, a new sense of connectedness and new skills to negotiate the world of relationships.

This is an edited version of the chapter ‘Men In Stepfamilies’, by Steve Martin, from Journeys in Fatherhood – an anthology.

“This book is a collection of heartfelt and honest reflections on being a father: the highs and lows, the dangers, and the opportunities to be the best dad you can possibly be. In this anthology many men describe their personal experiences of fatherhood. Some men have used violence in their relationships or have experienced the family court system, some have become stepfathers and one man tells of the death of his child and what this has taught him about being a father. This book includes tips and practical tools, and invites you to consider different ways of being a parent.”