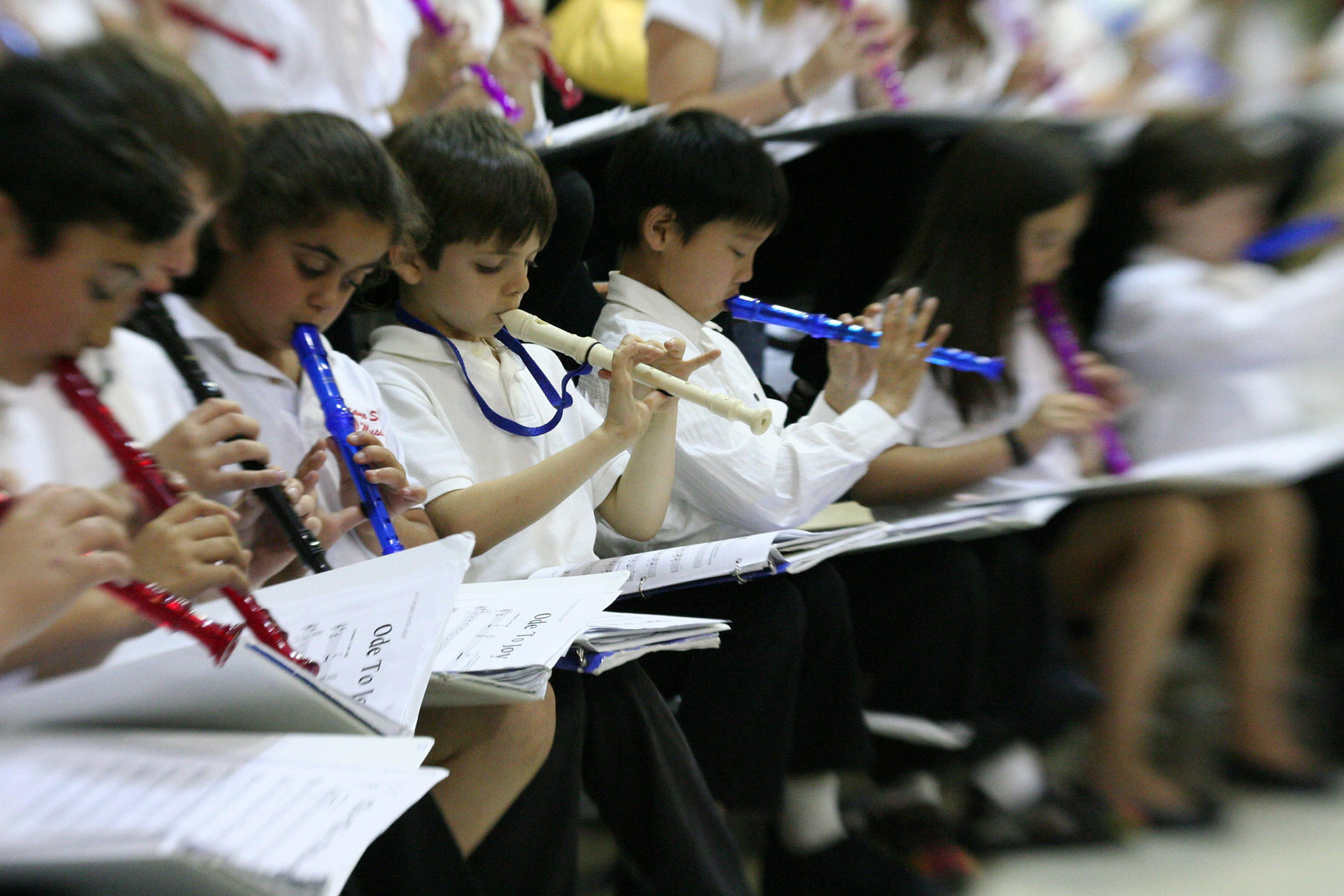 26 May Music to our fears

Posted at 16:32h in Editors Picks, Music by Editor

Pat Thomas relives his sort-of musical past when his son brings home his first recorder.

A shrill, piercing sound hits me as soon as I open the front door, and the memories come flooding in – my childhood, warm summer days at school, yelling teachers and fumbling, farting children. Sounds, just like smells, can transport you in time. My son has brought home his first recorder.

Like many recorder novices, he is blowing down the instrument as hard as he can, resulting in a long, loud, high whine. This noise can bring fear into the hearts of parents, but it can also bring joy, as it is often a child’s first foray into the world of creating music.

I remember my first recorder. It was small and brown, and was my first move into music beyond shakers and wooden blocks. I saw it as my ticket out of the school singalongs presided over by the evil witch, ‘Mrs Beerbottle’.

It seemed simple enough, but I struggled to cover all the holes with my little fingers, especially those double ones at the end, and made odd and unpleasant sounds. To my parents’ horror, I was entrusted to take my recorder home for further ‘practice’. But with eight children in the house, and a mix of instruments, stereos and general noise, one recorder probably didn’t make much difference.

I am sorry to say my instrument and I never really clicked. This was probably because I practised more in water than on land. Immersed in water, the recorder developed unique properties. Not only did birdsong solos become the legend of bath time, but the recorder could be used to spit water at siblings with great accuracy. I never did get to play it at a school assembly or follow my special crush Tania and move onto the ‘big’ (tenor) recorder.

After my failure to master the recorder, I declared to my mother I wanted to learn the bagpipes. Years earlier we had lived in Edinburgh, and I developed an interest in all things Scottish. In Australia, I insisted on wearing my kilt and sporran on shopping trips, and my mortified mum took to walking a couple of steps ahead of me. So it wasn’t surprising that I wanted to take up the bagpipes. What was surprising was that my mother actually agreed.

To my disappointment, I found you don’t actually start with the bagpipes, but with the small woodwind portion called the chanter. It looks a little like a recorder, but is actually a reed instrument and therefore even more difficult to master. Being more delicate (and expensive), the chanter never made it to my bathroom hall of fame. After a few weeks, when my instructor insisted I actually play some notes for him, I declared that my bagpipe days, too, were over. However, my music-playing days were not – I have since learnt to play the guitar well enough for a singalong, but am left with ambivalence towards woodwind instruments.

I reach the lounge room and see my son with his recorder. I feel this is an opportunity for me to shine as a parent. As I approach him, I ask myself if I can bear hours of screeching, if I will support his desires, no matter how tedious or short-lived, or if  I will take the easy option and yell at him to stop the racket. The latter is tempting, as  I am tired and hungry after a tough day at work.

However, I think of my parents, take a deep breath and listen to my son. Then I take the recorder and show him how to play ‘Three Blind Mice’. It doesn’t sound exactly as it should, but he gets the idea. He sees his dad playing the recorder and gets that it is okay to give it a try, even if it sounds funny and you seem a little silly.

Have I fulfilled my role as a parent? I know my involvement in his music-making life won’t end here. Maybe, with the right encouragement, he will go a bit further than I did. Being the generally well-behaved kid he is, I doubt he will ever take his recorder into the bath. This sort of mischief is one element of music-making that I’ll leave him to figure out on his own. It occurs to me that I may be less philosophical in a couple of years when his younger brother brings home his first recorder – that little rascal will probably figure out all sorts of uses for a recorder I couldn’t have imagined.