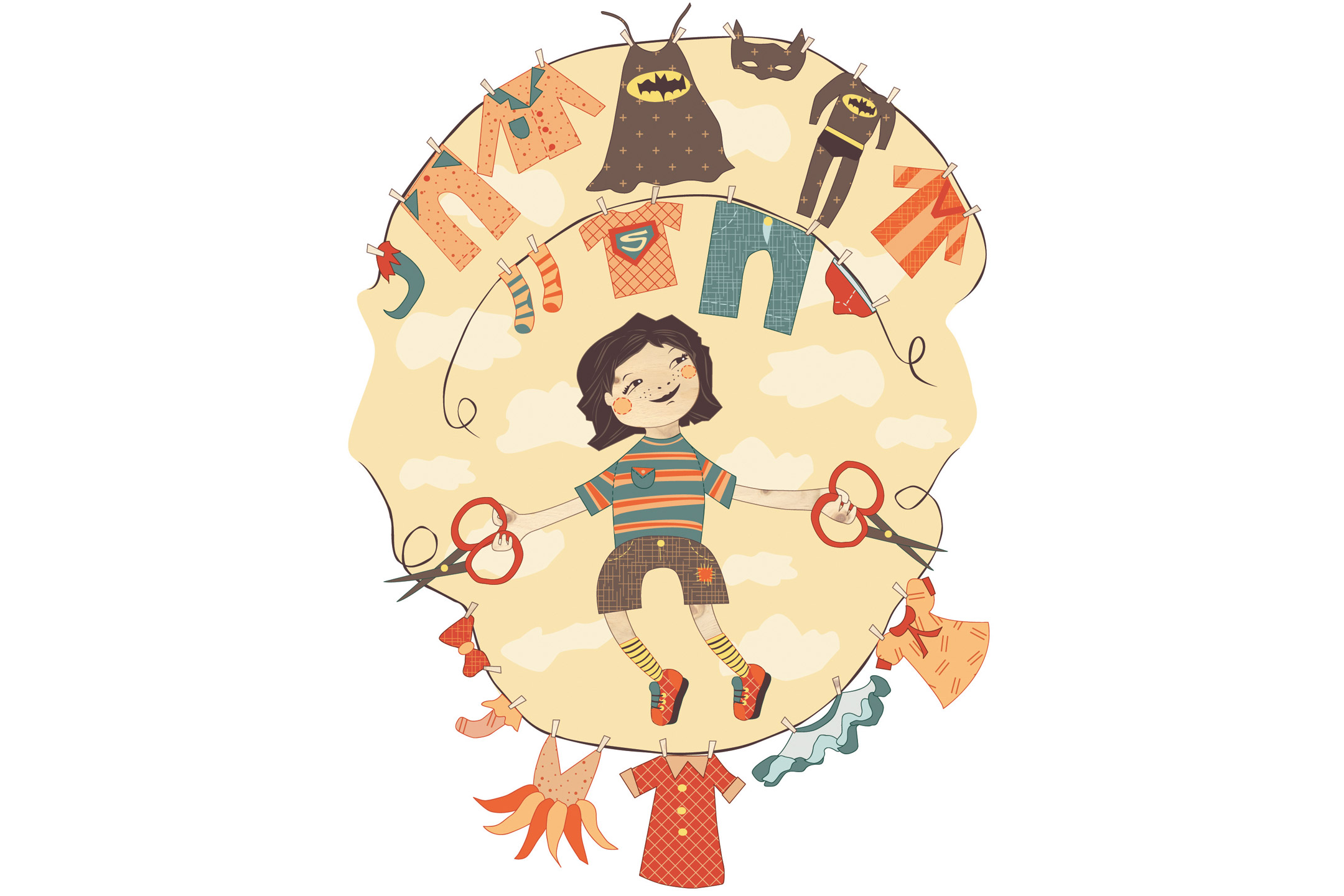 Posted at 14:10h in Celebrate, Editors Picks by admin

Lisa Johnson hopes to give her children the gift that money can’t buy – the confidence to be themselves.

… my daughter has always been true to herself and not worried about what others think of her…Friends were just friends, be they boy or girl.

My daughter has always preferred boys’ clothes. I managed to force a few dresses on her as a baby, but once she could stand and walk, she made her clothing preferences quite clear, as only a toddler can. It got to the point where it really wasn’t worth the fight; pick your battles and all that. If my daughter felt more comfortable in her brother’s hand-me-downs, who was I to change her?

When she was a toddler, people regarded her penchant for boys’ clothes as ‘cute’ and ‘quirky’ – her get-ups would invite comments such as, “Isn’t she gorgeous? She must really love her brother!” As she entered preschool and the fetish didn’t pass, some folks took it upon themselves to voice their concern at my daughter’s total lack of interest in anything feminine. It was viewed as something of a problem that apparently needed fixing. ‘School will change her’ was the consensus. My quirky, individual daughter was, according to those around her, going through a ‘phase’, and a good dose of school was the solution.

When she did start primary school, her differences were not only accepted, they were celebrated. This might have been just luck, but I like to think it’s because my daughter has always been true to herself and not worried about what others think of her. Refusing to wear a school dress, she encouraged others to abandon stereotypes and just ‘be’. Friends were just friends, be they boy or girl.

Her birthday and Christmas toy requests included action figures and knights, and she took delight in dressing up as her favourite superheroes. If invited to a fairy party, she would go as an elf. Our shopping trips would take place in the boys’ department, including the purchasing of shoes and underpants. She cut her hair short and would baulk at anything too pink or frilly. Admittedly, there were times when I was guilty  of trying to force my daughter to conform. I recall shoving her into a blue tutu for  a dance concert, only to watch her karate-chop the girl beside her during the performance. You can’t force a square peg into a round hole, no matter how many people are watching or how nice the music is.

I sensed things were about to change last year when my daughter was in Grade 3. First she said she wanted to grow her hair long. It now sits on her shoulders. Then this year when we went shopping for a new outfit for the school dance, we headed straight for the girls’ department – I hadn’t been in one for years. My daughter announced she wanted to find a dress to wear to the dance, having worn a boy’s suit (albeit a glittery one) just the year before. We eventually found a suitable dress with no frills and a kind of ‘rock-star’ attitude. And then, just a few weeks ago as I sorted through her wardrobe, I was given strict instructions to dispose of anything that was boys’ clothing, as it didn’t ‘fit’ her any more. She got that right!

So now I have a daughter I can’t even fool with a pair of unisex black tracksuit pants (they’re so much cheaper). She will never be a pink-and-frills kind of a girl, and she still has her own very special sense of style. She plays football, goes to Cubs and enjoys playing games with her brothers. On one hand, I almost feel a sense of loss, but on the other I’m so proud of her self-directed journey.

My daughter wasn’t pushed to change; it’s just where she is now. Recently, my four-year-old son informed me he wants to go to a fairy party in a pink dress, and who am I to argue? I’m all for self-expression! As a parent, I hope I can give my children the gift money can’t buy – the confidence to be themselves.