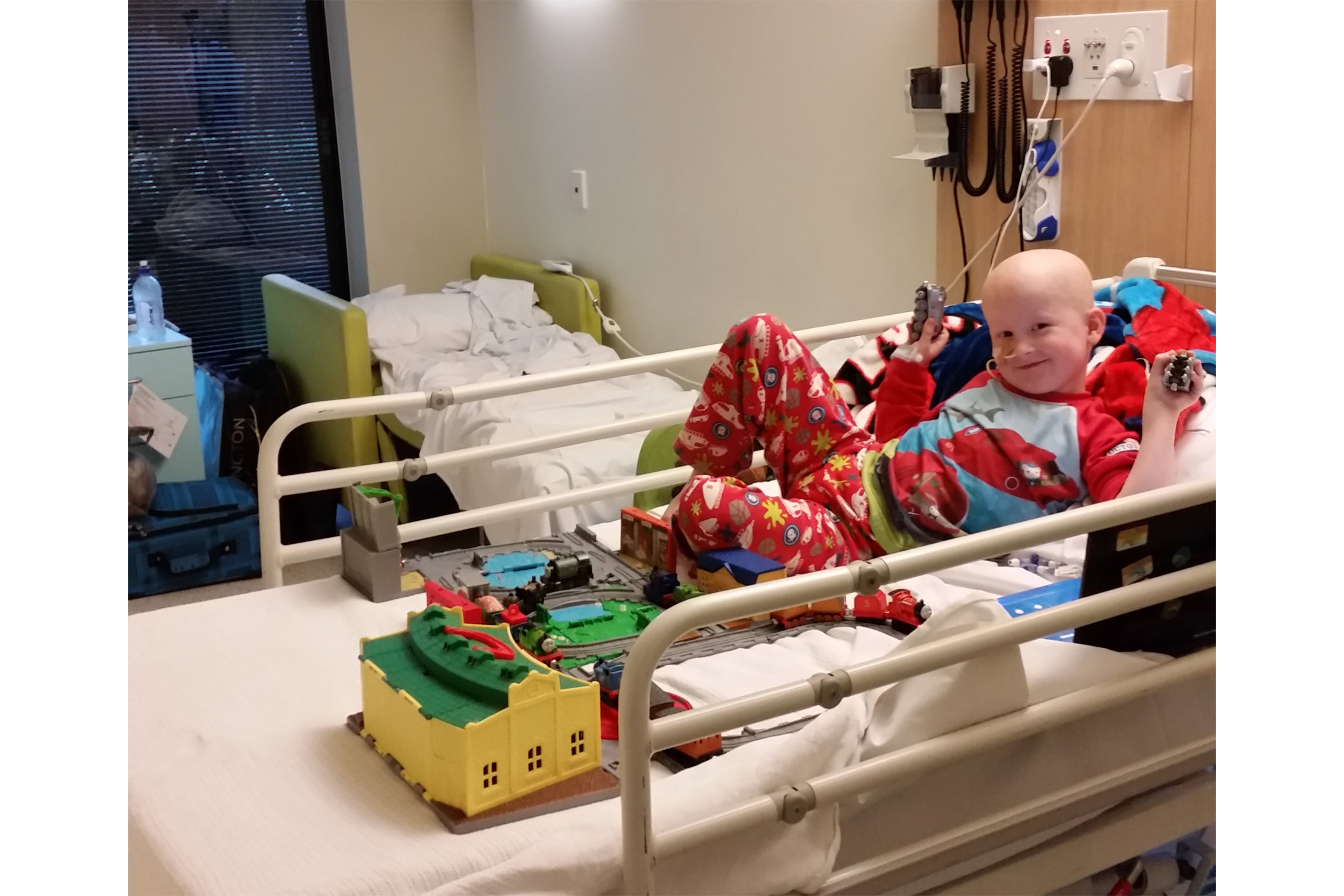 Posted at 10:54h in Editors Picks, Inform, Inspire by admin

James only took this important and essential drug twice, writes Toni Bloor, and I thought that cancer was going to be our scariest time.

James was five years old when he became unwell. His glands were swollen and there was a lump on the side of his head. We took him to an ear, nose and throat specialist and were told it was a mystery illness. We were advised to take him to the dentist because maybe it was his teeth, or, maybe it was glandular fever.

We consulted specialist after specialist for about eight weeks and no one could tell us what was causing James’s illness or even what the illness was. It would be months before we knew.

Search for a diagnosis

On Good Friday 2014, I couldn’t take it anymore, so I bundled him into the car and drove him to Sunshine Hospital. James was screaming for the entire trip, which was gut wrenching. There was nothing I could do.

When we arrived, we were seen straight away, but they just took some blood and sent us home. I hoped that whatever was wrong with James would show in the blood test, but it told us nothing.

James’s pain continued. Days later he was admitted to have a CT scan and that showed that there was a mass in his head that was starting to push on his brain. We were transferred to The Royal Children’s Hospital not knowing what this mass was, but that it was serious enough for the Children’s.

No one said anything about what it could be.

Seeing James wheeled onto the ward was very confronting, but not as confronting as being told your little boy has cancer. Nothing can prepare you for that.

My world stopped. We also had a two-year-old. What would we do? My mum took indefinite leave from her job to help so my husband could continue working, and we were so lucky to have the support of wonderful friends. Without all that I don’t believe we would have made it through.

After days of testing to find out what the type of cancer it was, and the right treatment, we were told he had Burkitt’s lymphoma. Burkitt’s is a fast-growing cancer and James had to start chemo immediately. At this time, pressure from the tumour, which was filling any spare space it could find, meant he had only a millimetre of airway left.

What if I can’t beat this?

James had six months of intense chemo. The majority of this time was spent at the amazing Royal Children’s Hospital. It became our home. Thanks to the incredible doctors and nurses, James beat the cancer. For this, we are truly blessed.

Sadly, cancer wasn’t going to be the only life-threatening problem for James. The chemo that saved his life has serious side effects for so many children. For James, that means damage to one of his heart valves, caused by a chemo drug called anthracycline.

James only took this important and essential drug twice. But, five years after cancer, he was diagnosed with cardiomyopathy (heart muscle disease) and is now on two different medications every day to try and manage it.

I thought that cancer was going to be our scariest time. What do you say to your son when he asks you “what if I can’t beat this?”.

James struggles to be active; simple tasks take it out of him. He went from being a little boy who ran and played all day, to a child who can’t do basic things without having to stop for a rest. He struggles to keep up with us, even when walking, and has to remind us to slow down; “Mum remember I have a heart condition and can’t walk fast.”

We’re taking part in a study at the Murdoch Children’s Research Institute because we want a world where life-saving medicine isn’t life threatening. We hope that one day a prevention or cure for heart damage from cancer treatment can be found so that other children can have better outcomes.  We want James to beat this one too.

The Murdoch Children’s Research Institute (MCRI) is recruiting patients for a new national trial aiming to identify those at risk of heart damage following cancer treatment. The Australian Cardio Oncology Registry (ACOR)/Bio-bank study, a national first and the largest of its kind in the world, is recruiting across 12 hospitals for all current or previously treated patients exposed to therapies that can damage heart tissue, like chemotherapy, radiotherapy and immunotherapy. Cancer survivors can be of any age, including children, adolescents and adults.

Anti-cancer therapies successfully treat 80 per cent of children with cancer but can cause heart disease in many survivors. The ACOR/Bio-bank study is trying to find clues (biomarkers) in genetics and heart imaging studies to reveal which children are vulnerable to heart damage if treated with cancer drugs. To learn more about the study visit acor-registry.org.au