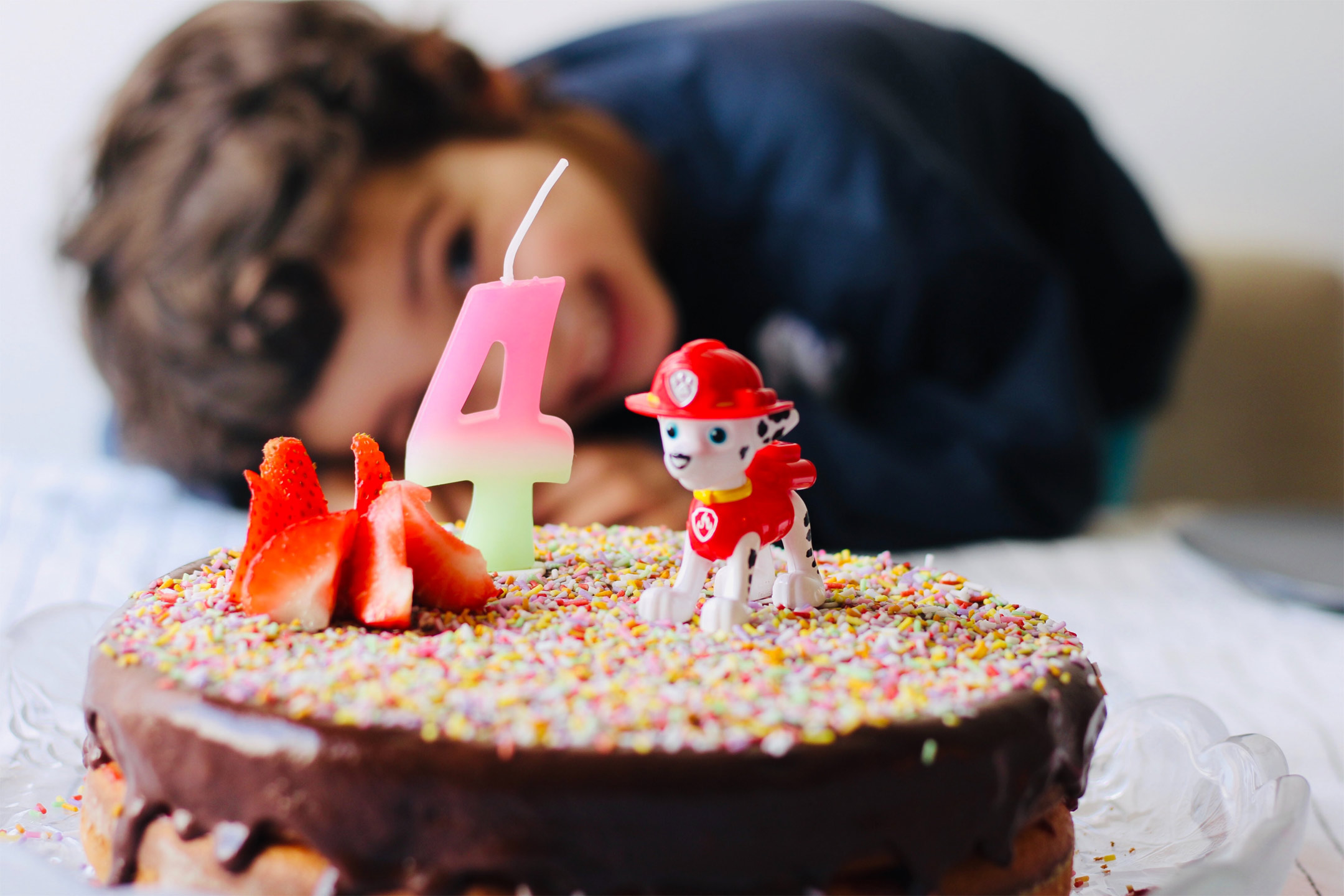 06 May Our fairy was a footballer!

Posted at 11:35h in Celebrate, Editors Picks by Editor

Elizabeth Bate is surprised when an unconventional entertainer becomes the hit of the party.

My daughter, Rosie, was desperate to have a fairy party for her fourth birthday. She’s always loved frills, glitter and ribbons; new skirts are assessed on their ability to twirl and everything has to be pink. So the fairy party idea was no surprise.

Having had my fingers burnt the previous year trying to run our son’s superhero party with the assistance of my husband, Martin – who terrified the children by confusing Batman with Dracula – I decided to engage the services of a professional. In our local paper, I found an advertisement for a ‘Fairy Godmother’ who promised to “take the stress out and put the fun and magic back into your child’s special day”. I booked her sight unseen. All I had to do was provide the food.

On the day of the party, Rosie received the requisite fairy outfit – layers of synthetic tulle on a sequinned waistband. A set of wings and a sparkly headdress completed the outfit. She slipped it on and twirled this way and that with an earnest expression. “Don’t you like it?” I asked. “Yes,” she replied, “but it doesn’t twirl.” My six-year-old son, Sam, intervened. “Fairy skirts aren’t meant to twirl. The magic works better that way.”

Rosie spent the morning practising, under her brother’s instructions, how to use fairy equipment: the correct wand angle for casting spells, how to sprinkle fairy dust and so on. (Sam was experienced from his wizard phase.)

That afternoon, as 12 little fairies flocked through our gate, a faded red Mini-Minor spluttered into the driveway. With a cough, the engine died and the car door opened. The first thing to emerge was a Doc Martin boot. I felt a twinge of apprehension as a large figure, encased in violent purple, unfolded herself from the car. Our Fairy Godmother had apparently arrived. 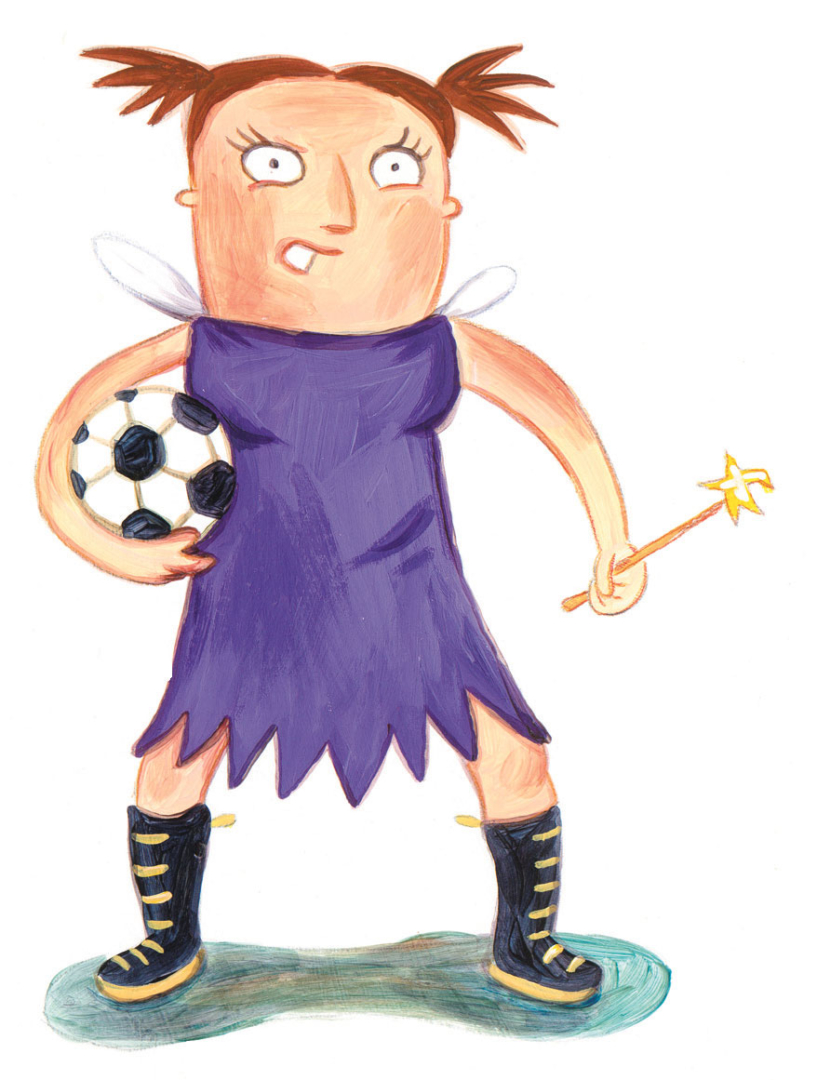 She drew herself up to her full, impressive height and executed several stretches as if she’d driven through the night. Armed with a worn backpack, she strode forthrightly towards us, reminding me somehow of Aunty Jack. Silence reigned in the crowd as she extended a beefy hand to Martin. “I’m the Fairy Godmother,” she announced in a gravelly voice. “Would’ve got here earlier, but the highway’s a car park.” Up close, she was a confusion of colours: her florid complexion competed with the drama of the gown and industrial-strength stage make-up.
Martin could barely squeak a response, but his face reflected the jaw-dropping reactions of all the parents.

At most birthday parties, parents drop and run, thrilled to have a quiet moment. On this occasion, however, they hovered, presumably to see if our celebrity guest was entirely safe. Unfazed by her audience, Fairy Godmother proceeded to roll out a series of most unlikely fairy games.

The first in her repertoire was aptly named the Screaming Competition. The rules were simple enough. On the count of three, the children were to scream as loudly as they could. To our ears, even the first timid attempts were like fingernails scraping down a blackboard. However, Fairy Godmother could tell they were holding back. “I’m sure you can do better than that,” she cried. “Let’s see what those fabulous lungs of yours can really do. We want to scare the birds from the treetops!” Surprising imagery, perhaps, from a Fairy Godmother, but the little girls went for it in a big way. The shrill sound emitted by these pint-sized fluff balls was enough to make the hairs on the backs of our necks stand up. This was not the sound of frolicking children – this was bloodcurdling. I berated myself for not checking her out more thoroughly.

One of the dads winced and leaned into Martin so that he could be heard over the din. “Where did you find this one, mate?” he shouted. “I’m not sure, but I’ve heard she’s highly sought after,” said my loyal husband. Oh, how he’ll be able to gloat later, I thought. Meanwhile, the noise continued. “Excellent!” said FG. “This pack of fairies really know how to take care of themselves.” They glowed triumphantly. A last round of screaming ensued, and then, with the slightest raise of her hand, they fell silent, ready to hang on her every word.

For the next game, she dived into her backpack for some equipment and retrieved, not a wand or some fairy dust, but a soccer ball. FG was no slouch with a ball and could, in fact, bend it like Beckham. The only object of the game was for the children to use any method to obtain possession, while she darted nimbly around them. They’d dive on it, tripping over each other and grab at her gown, while she worked her magic with the ball, casting the occasional glance towards her impressed audience.

For the last game before cake time, Fairy Godmother returned to her backpack and pulled out a tug-of-war rope. (I’d given up all hope of seeing anything fairy-related.) “OK,” she bellowed, surveying her charges, “who wants to show how strong they are?” All the fairies responded enthusiastically. Fairy Godmother assembled them on one end of the rope. “Right, I need some dads on the other end of the rope.” She co-opted several reluctant men who were standing closest to the action. “When I say go,” she stage-whispered to the fairies, “you have to pull the dads over the line. Ready. Go!”

Either the dads didn’t know their own collective strength, or perhaps they felt they had something to prove to our FG, but in one fell swoop, they yanked the little powder puffs over the line so vigorously that the tailenders were almost airborne, and they ended up in a heap on the ground. Fairy Godmother looked down at her flock of dirty-kneed, bent-winged fairies and assumed an expression of mock horror. “Hey – where are your muscles?” she cried. She flexed her own biceps in a show of strength. “This time we’re going to try something a bit different.” She lined up the dads again, but she took up position at the front of the fairy pack. “Let the games begin,” she cried. The fathers looked unsure, but as Fairy Godmother braced herself, tightened her grip and began to pull on the rope, it was clear she meant business. “Come on,” she called to the children. “Pull!” FG’s forearm muscles rippled through her skin, her gown strained and her face reddened. There was much huffing and puffing on both sides of the line as it became apparent the contest was on for real. After a herculean struggle, Fairy Godmother and her team prevailed.
The fairies ran around the lawn like Beckham doing aeroplanes after a goal. The men were somewhat red-faced, although I wasn’t sure whether that was due to physical exertion or the humiliation of defeat. But there’s no doubt they now treated Fairy Godmother with a new respect, clapping her on the back and asking what the next game was going to be.

It was clear that the parents weren’t going anywhere, so I grabbed a bottle of bubbly and some beer out of the fridge and hoped the sausage rolls and birthday cake would stretch far enough. Fairy Godmother, her face now stripes of perspiration, eyeliner and glitter, pulled up a chair and helped herself to a twist top.

Rosie and the other dishevelled fairies observed FG with a mix of awe and adoration. “You are the best pack of fairies ever – the strongest, the smartest and with the best set of lungs,” she said as she opened another twist top. Her charges swelled with pride. Fairy Godmother was then surrounded by the blokes, asking how far ahead you have to book her for a party. She pulled out a stash of business cards from an invisible purpose-built pocket in the back of her purple gown. “Just remember to book early.”

Then she hoisted Rosie up into the air with one arm, planted a kiss on her grubby cheek and wished her a happy birthday.