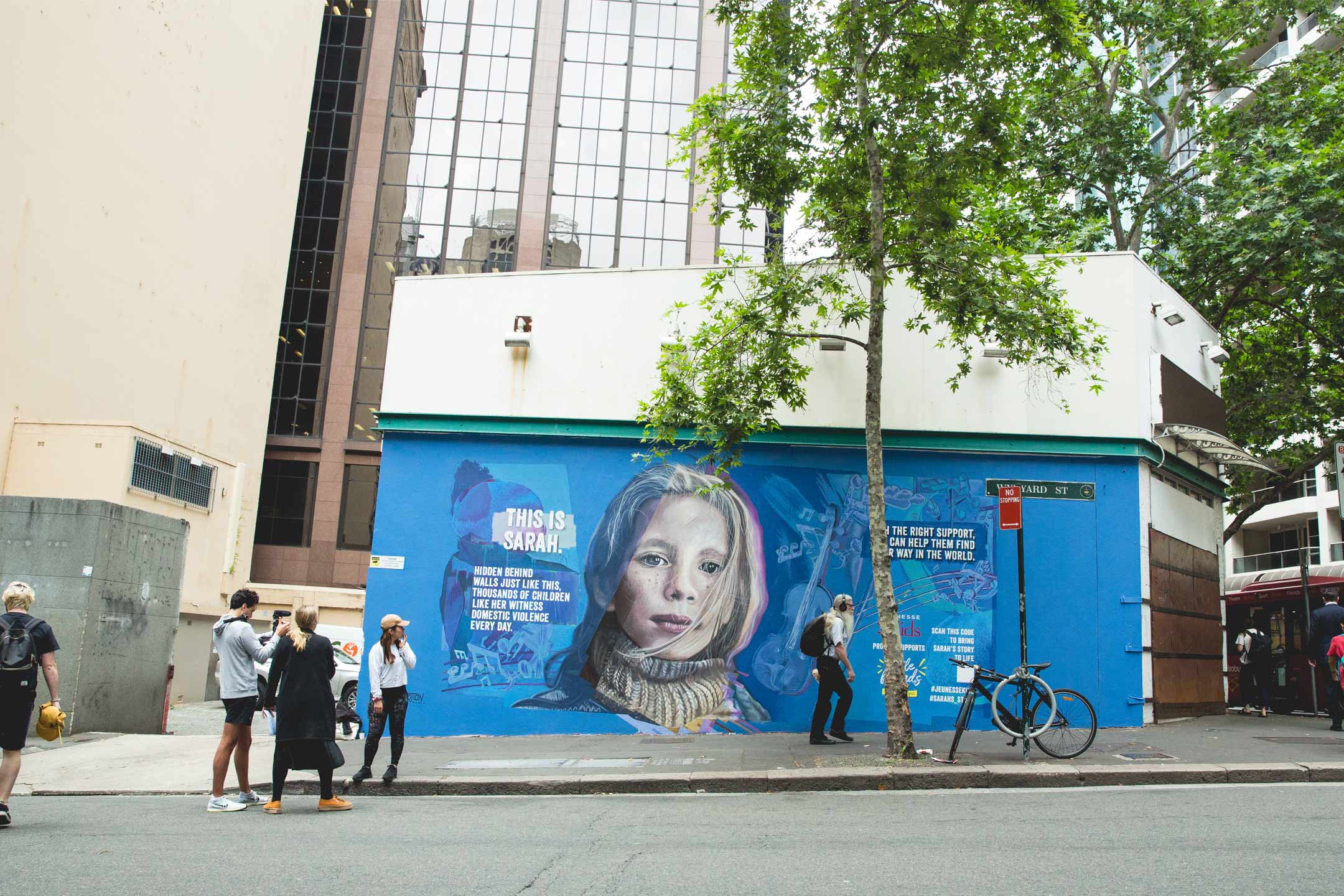 27 Nov PAINTING A PICTURE OF our VULNERABLE AND VOICELESS CHILDREN

Posted at 10:42h in Editors Picks, Inspire by admin

In Australia, more than 1 million children are affected by domestic and family violence. Experts say that exposure can lead to short and long term negative mental, behavioural, and social effects. Those who witness physical, emotional or verbal domestic violence are twice as likely to abuse drugs, and six times more likely to die by suicide (Family, domestic and sexual violence in Australia 2018, AIHW.) 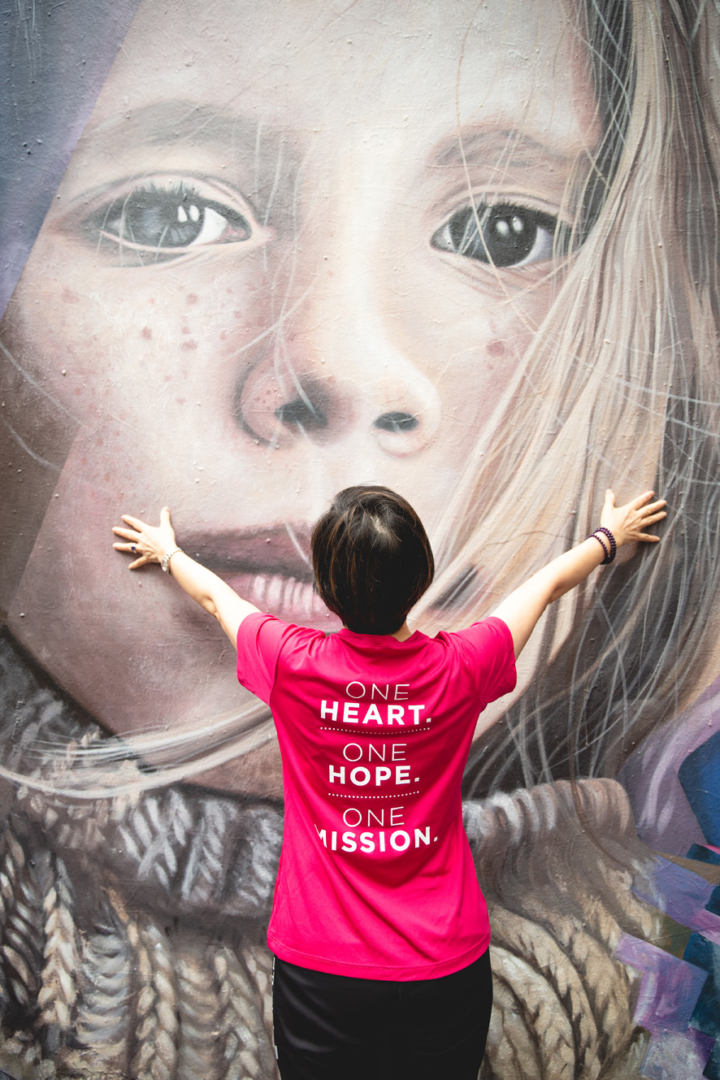 In a bold move to expose Australia’s domestic violence problem, international lifestyle brand Jeunesse Australasia, and their charitable arm Jeunesse Kids, are bringing attention to the hidden struggles of children affected through a national purpose campaign.

In partnership with not-for-profit charity Friends with Dignity, the initiative opened a raw, emotionally moving interactive mural and animation film titled ‘Sarah’s Story’ on York Street in Sydney’s CBD on the 20th of November—marking the United Nations Universal Children’s Day.

Jeunesse Australasia hopes to raise awareness around these sobering statistics through ‘Sarah’s Story’—a story based on the real-life events of a 6-year-old child affected by exposure to domestic violence in the home, and her remarkable recovery through the charity’s scholarship program called Little Friends. 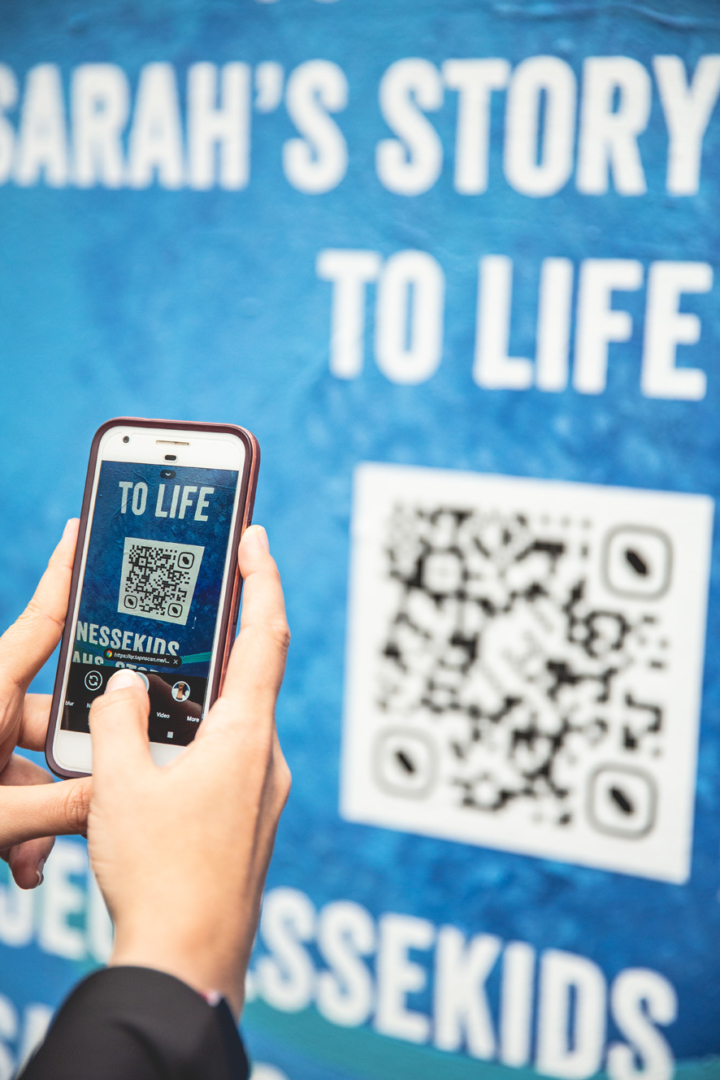 Sarah, whose name has been changed for confidentiality reasons, gives a face to this social issue in a bid to raise awareness and funds for children across Australia who are affected by domestic violence or abuse. The powerful interactive mural reveals the striking image of a young Sarah and also features a QR Scan Code that will bring Sarah’s story to life in a short animation film—revealing her tainted relationship with music. Six-year-old Sarah chose to have violin lessons through a scholarship provided by the Partnership, as each time her parents fought, they played music to cover the sounds of desperation. She hated music then but now has a positive relationship to it.

General Manager of Jeunesse Global Australasia—Rachel McVinish believes that ‘Sarah’s Story’ is a truly touching example of the Little Friends scholarship program and the Jeunesse Kids partnership—one which they hope will empower communities to give children a brighter future.

The Little Friends biannual scholarships help to cover a variety of areas—from helping kids attend camp and after-school activities with their peers, to providing uniforms & textbooks and extra-curricular activities including equipment for music classes. To date 186 scholarships have been awarded.

“The Little Friends Scholarship program, with the support of Jeunesse Kids, ensures all children who are facing or have faced domestic violence have the ability to normalise and improve their lives,” says Friends with Dignity Co-Director and Chief Financial Officer, Julia McKenna.

“The scholarships are designed to help young domestic violence survivors re-build their confidence by finding something they are good at, and ensuring their education continues. This campaign is giving this much needed cause a platform and will raise a much-needed voice for these children in need.”

When commenting on the campaign and what they hope to achieve, McVinish has added that while addressing the issue of domestic violence is complex and will require generational change—this is a first and very important step in bringing the issue to the forefront of Australian minds.

Jeunesse Australasia does not provide emergency assistance or support services to people who are experiencing or are at risk of experiencing domestic and family violence and/or sexual assault. If you, a child or another person is in immediate danger, call 000. For sexual assault domestic and family violence counselling service call 1800 RESPECT 1800 737 732.