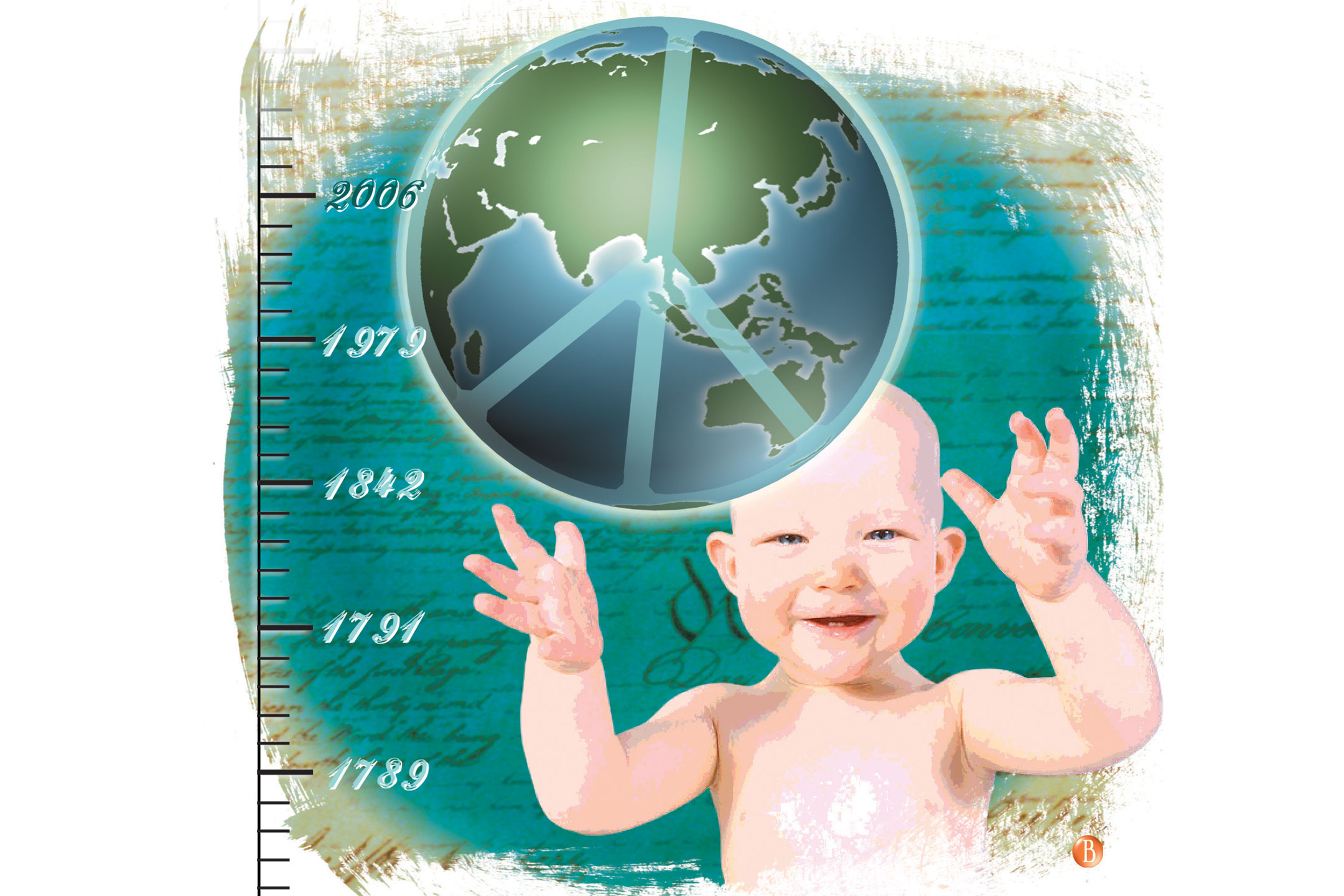 Posted at 12:37h in Editors Picks, Inspire, Validate by admin

Some of the most remarkable social changes – such as universal suffrage, human rights declarations, fairer labour laws and environmental protection – were brought about by major developments in childrearing attitudes.

Parenting and education can change the world.

If you think that war, tyranny, human-rights abuses and ecological destruction go hand in hand with human civilisation, there is new and exciting evidence indicating that none of these problems is inescapable. In fact, there is growing evidence suggesting that the means to prevent these problems are in the hands of mums and dads and all others involved in the care and education of children.

Child-development scientists agree that parental affection has the power to make children more loving, self-assured, empathic and cooperative. Revolutionary technology has made possible the remarkable discovery that parental love in early childhood changes the brain chemistry and neural pathways in a child’s brain. It is therefore no surprise that, according to psycho-historians, childrearing reforms have always preceded societies’ steps towards improved human rights and democracy.

So what kinds of social changes are brought about when a large enough proportion of any population shifts to a more supportive and empathic style of parenting? Some of the most remarkable social changes – such as universal suffrage, human-rights declarations, fairer labour laws and environmental protection – were partly brought about by major developments in childrearing attitudes.

The Impact of the French Revolution

One of the most significant turning points in history, a cataclysmic moment that marked the birth of modern nation-state democracy, was the French Revolution of 1789. Although French democracy would falter and stumble many times, with governments often reverting to tyranny, terror and military rule, the remarkable events of 1789 and the years that followed shunted the world towards democracy.

Some of the more momentous products of the French Revolution included the Declaration of the Rights of Man and of the Citizen and the abolition of feudal power, church power and aristocratic privilege. For the first time, a nation upheld that its citizens (although at first only its male citizens) – rather than individuals claiming the doctrine of ‘divine right’ – were the only legitimate source of civic power. Certainly, the ideals of liberty, fraternity and equality are incompletely manifest in modern democracies, but it is clear that they germinated in the collective imagination of the French middle class towards the end of the 18th Century. For the first time, masses of ordinary people stood up to oppressive authority and demanded more freedom, equality and respect for human rights than had ever been available in any nation.

It is no accident that this maturation in French society followed a transformation in parent-child relations that had begun one generation earlier. The ideas of ‘family love’ and ‘mother love’ first appeared in French literature in the middle of the 18th Century. For the first time, publications dealing with parenting issues began to emphasise parents’ obligations to their children, rather than the reverse. Although the concept of ‘mother love’ as depicted in Jean-Jacques Rousseau’s highly influential book Emile seems unremarkable now, it was a revolutionary idea in 1762, the year of its publication.

During the 1760s in France, a flurry of publications appeared urging mothers to keep their babies at home and to breastfeed them. At the time, many European mothers used the services of wet nurses to feed their babies. Although it took decades for wet-nursing to disappear, increasing numbers of French babies remained near their mothers through the 1760s.

At about the same time, the USA would become (temporarily) the world’s most democratic nation. So what was it that released the fierce individualism that fashioned, through the American Revolution, the world’s first enduring nation-state democracy, producing the most liberal society of the times? What was it that enabled democracy to gain a tentative hold in the New World while it faltered in Europe? American achievements included the abolition of slavery (in the northern states to begin with), the banning of hereditary titles and the breaking down of the political powers of the church. Enshrined in the 1791 Bill of Rights were freedom of speech, freedom of the press, freedom of worship and freedom of assembly. These were all quantum leaps towards a fairer and freer society at the time. Certainly, America’s fledgling democracy was deficient, as it excluded women and non-whites. Nevertheless, despite these failings, this embryonic democracy created in 1790 was a social ‘great leap forward’.

So why did these liberal forces gain such momentum in the North American colonies in particular, and not in other resource-rich colonies or countries? A clear pattern of childrearing reforms emerged in the USA that helped many individuals to blaze a trail for modern egalitarianism, respect for basic human rights and freedom of thought. The majority of the people who fought (with quite a bit of fervour and subsequent success) for the values of liberty, equality and fairness were drawn from waves of English migrant families and their descendants. These families came from a time and strata of English society that, at about the time of the 17th Century, produced a turning point in the evolution of the concept of childhood. England was at that time about a century ahead of France and about 200 years ahead of the rest of Europe in such key indices as the decline of infanticide and the cessation of the practice of sending babies out to wet nurses. The English had also rejected the abusive purification rites practised on babies and children that were still commonplace in mainland Europe at that time.

From the start then, parents in the American colonies, particularly in the north-east, were measurably closer to, and more nurturing towards, their children. It was the first time in Western history that mothers were beginning to spend significant time empathically caring for their infants. Colonial America had the most even boy-girl ratio in the world – a sign that child abandonment and infanticide (characterised in this case by a preference for boys) had all but disappeared. The Americans were also the first to end wet-nursing altogether.

Children of early American colonists tended to be breastfed on demand, a significant advantage over their European counterparts. European visitors to the American colonies during the 17th Century frequently commented on the greater liberty, precociousness and self-assurance of American-born children. Europeans were often shocked by American children’s tendency to be outspoken and to go about unchaperoned. Many of these children did not exhibit the unquestioning obedience instilled in their European counterparts. (Notable exceptions existed among Puritans, who preached minimal affection and strict obedience, and who frequently sent their children away to work for friends or relatives.) In addition, the USA was one of the first countries to set up mass public schooling, and one of the first to campaign – with limited success – against the beating of children both at home and at school. The State of New Hampshire abolished corporal punishment in schools towards the end of the 19th Century. It was this unusual concentration of comparatively advanced parenting that caused American social structures to evolve beyond the rest of the contemporary world.

One of the world’s leading examples of peace and social justice achieved through childrearing reform exists in Sweden. How did the Swedes manage, despite their relative scarcity of natural resources and their Arctic climate, to prosper so much and advance so far socially? For instance, Sweden was one of the first countries to enshrine in law equal pay for men and women, in its Act on Equality Between Men and Women at Work. Sweden has for a long time led the world in the care of children. Swedish churches instigated a universal literacy program more than 200 years ago, and universal elementary education began in Sweden in 1842. Sweden also managed to significantly lower its infant-mortality rate, and continues to lead the world in this area.

In 1979, Sweden became the first country to make hitting children, in any form or intensity, explicitly illegal. People who do so are not criminalised, but counselled and educated. Since this law was passed, there has been a marked reduction in assaults on children. The country’s child-homicide rate was zero for 15 years running, and in the decades since the introduction of the legislation, children’s own reports of being hit have plummeted dramatically, below that of other industrialised nations.

Any fears that an end to corporal punishment would lead to ‘undisciplined’ children are groundless. Since 1979, Sweden has experienced a steady decline in youth crime, youth alcohol and drug abuse, rape and youth suicide. There has also been an increase in the reporting of youth violence, caused by a nationwide ‘zero-tolerance’ policy towards bullying in schools. Clearly, this legislation has been remarkably successful for Swedish children, as well as for Swedish society as a whole.

Swedish mothers are entitled to 480 days of paid maternity leave. The rest of the world would reap immeasurable benefits from adopting a similar initiative. Far from being a costly exercise, this would save masses of money in the long term by helping to create happier, healthier and better-adjusted children. It is no coincidence that, as the world leader in the care of children, Sweden has managed to stay out of war for almost 200 years, and its homicide rate is among the lowest in the world. Furthermore, the Swedish government leads the world in its commitment to ridding the economy of fossil-fuel dependency completely by 2045. This is an enviable state of affairs, and one that is demonstrably within the reach of any country that chooses to put its resources and political will firmly behind the improved nurturance, protection and education of its parents and children.

So what does all this mean for the world today?

An abundance of studies has shown that when any culture favours punitive and authoritarian styles of parenting, this can lead to increased crime rates, more repressive domestic policies and a more belligerent foreign policy. Fortunately, much of the world – including Australia – has gradually been moving away from traditional, punitive parenting customs. As childrearing innovations are embraced by parents and teachers in growing numbers, this has given rise to our modern societies, with their increasingly egalitarian and democratic characteristics. There is no modern democracy that cannot boast a greater degree of social justice than that which was available 100 years ago.

Compared to our ancestors, we enjoy a marked reduction in gender-based inequities, laws that protect minorities from vilification and discrimination, far more liberal social mores, freedom of self-expression, and welfare safety nets for the old, the sick and the unemployed. We take such advances for granted today, but these ideas were considered ‘pie in the sky’ in our great-grandparents’ time. How many of our present-day hopes might come to fruition in the future? Is the hope for world peace, for instance, merely a fool’s fantasy?

The more we examine the changing concept of childhood throughout history, the clearer it becomes that family relationships are the blueprint for the way in which public and political life unfolds in any nation. If childrearing continues to evolve and improve throughout the world, and if we continue our steady trend away from authoritarian, punitive, shaming and manipulative childrearing methods, then we should expect an accompanying improvement in key aspects of social, national and international affairs.

This is an edited excerpt from Parenting For A Peaceful World by Robin Grille (Longueville Media).

In this expansive book, Robin Grille draws on revolutionary new research to argue that the safeguarding of children’s emotional development is the key to creating a more peaceful and harmonious world. Parenting for a Peaceful World is a book for parents, child health professionals, and adults learning to be whole again. It is a manifesto for policy-makers and a resource for teachers. If the findings outlined in these pages are put into practice, the result may be a revolution of peace, humanity, and a world beyond our imagining.