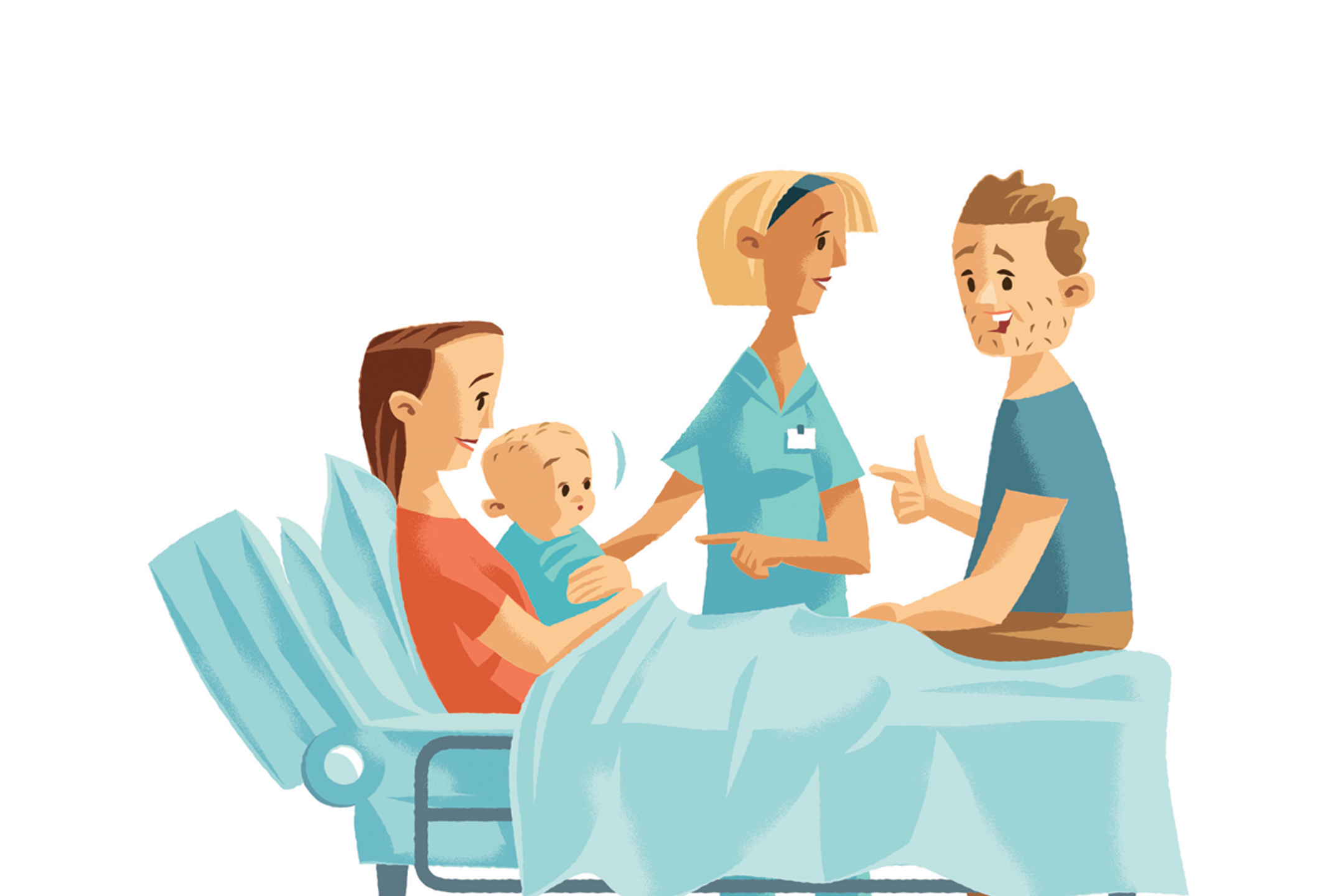 Posted at 14:04h in Editors Picks, Inform by admin

Today’s dads are eager to have a connection with their babies, and Richard Fletcher looks at how the bonding process works.

Parents are often unaware how much babies want and actively seek a close connection with their fathers as well as their mothers.

When talking to fathers-to-be about becoming a dad, three things stand out. The most obvious is that times have changed. Blokes meeting in men-only prenatal classes to discuss their role at the birth and caring for the baby afterwards are breaking new ground. Their own fathers might have been kept out of the delivery suite, and there would probably not have been classes for new dads. The second is the explicit desire in these men to have a close bond with their child. Fathers have always loved their children, but today’s dads are after a connection. They realise this means parenting differently from their own fathers and starting the bonding early. The third thing is that these men have little idea about how bonding happens.

Ian is five weeks away from the birth of his first child. His voice rises as he describes all the fathering he will be doing as his child “learns to ride a bike and kick a ball”. His own dad was off working when he was born, but Ian plans to be right there at the birth. As for baby care, he is keen to be 100 per cent supportive, but when I ask what he expects to be doing with his new bub, he replies with a glance at his partner, “Whatever she wants me to do”.

For mothers, this approach has its good and bad points. Having a supportive father who is ready to do whatever it takes is just what a mother deserves. The drawback is that it leaves her to figure out what the baby needs. Father and baby are also missing out if they wait until later years to try to form a close connection.

Like Ian, many new fathers have an agenda for when the baby is born. It often involves finishing renovations that were supposed to be completed before the baby arrived. A GP once commented to me about the number of new dads he was seeing in his surgery. “They come in for injuries mostly,” he said. “I guess they don’t know what to do with the new baby so they get up on the roof to fix something.” Men’s lack of knowledge about infant care and bonding is not because they are unintelligent. However, simply wanting to have a close connection will not guarantee the kind of relationship these dads want with their newborn.

…babies can distinguish a male voice and learn to recognise it

Parents are often unaware of how much babies want and actively seek a close connection with their fathers as well as their mothers. Midwives will point out to a new dad that the baby is trying to turn their head to locate the father’s voice. Since hearing develops before birth, babies can distinguish a male voice and learn to recognise it, so talking to your baby while it’s in the womb makes perfect sense.

After birth, those moments when a baby is being held close enough to really see their father’s face can be important for learning. The intensity of the gaze when a baby locks on to scan all the facial features is no accident. In a way, this is how babies also learn about themselves – by seeing the expressions of recognition and pleasure in the faces of their parents. So a father’s role in building brain connections in his baby can start from day one.

There is evidence that what fathers do, even in the first weeks, will influence how their child turns out.

There is evidence that what fathers do, even in the first weeks, will influence how their child turns out,and that this influence is separate from that of the mother. The Federal Government’s Growing Up In Australia – The Longitudinal Study of Australian Children has been following the development of 10,000 children and their families since 2004. Children aged four to five in the study whose dads had signs of depression in the first year of their child’s life were compared with other children whose dads were not affected. Children of the affected fathers were found to be three times more likely to have behaviour problems, regardless of the mothers’ mental health.

Studies suggest the way a father interacts with even very young children can affect the children’s cognitive and behavioural development and academic achievements. While it may just look like playing and helping your child with very basic learning, the effects can be long-lasting. In one study, parents were asked to draw up a list of skills they had not seen their two or three-year-old perform. The parents then picked a skill from the list, which they each tried to teach their child (for example, putting beads on a string or standing on one leg). The children were followed up and their reading, maths and word-knowledge skills were measured. Fathers who were warmly encouraging and supportive of their two-year-old’s learning lifted the child’s reading skills at age five and their maths and vocabulary skills at ages five and seven. This impact from the father’s interaction style was in addition to that of the mother.

But dads should understand they might need some help, too.

The influence of the dads in these studies was not more important than that of the mums, but it was important. This means dads can be confident they have more than a ‘mum’s helper’ role. It also means they should take care of themselves. Most dads have heard about the ‘baby blues’ many women experience after birth. These mood swings and tearfulness usually disappear with enough rest during the first week, and if they don’t it is often the father who notices and urges the mother to see a health worker. But dads should understand they might need some help, too. Thanks to the efforts of beyondblue, the Black Dog Institute and other mental-health organisations, the stigma surrounding depression is lessening. New fathers can now check their mental health using tests such as the Edinburgh Postnatal Depression Scale, which is available on websites such as www.postpartummen.com.

As for the birth itself, it is now expected the father will be present, and many couples discuss how he will be involved. The difficulty is that not much can be predicted about how birth will go. Fathers can plan to ‘be there’ for the mother, and perhaps they will be the first to see the sex of their newborn or cut the umbilical cord. However, exactly what suits the mother during labour and delivery has to be worked out on the spot.

Not all deliveries go well, and sometimes medical intervention is needed.

This can put the dad in the hot seat, trying to support his partner’s wishes while getting the best treatment for her and their baby. Before birth, dads may also worry about seeing their wife in pain. “I’m terrified,” admitted one of the dads in a prenatal fathers’ group. “I don’t know how I’ll cope seeing her in that sort of pain and not being able to do anything about it.” The expressions of the other dads in the group showed just having this out in the open was something of a relief. While not all of them felt the same way, acknowledging that the father’s role at the birth could be an emotional minefield seemed to clear the air for a more realistic discussion of what to expect.

Prenatal programs vary in how well they incorporate fathers. There are now men-only sessions at hospitals, as well as privately run groups just for prospective dads. Even in programs that lack a focus on fathers, there is the chance to link up with other dads in the same situation. Many new dads I talk to do not have much of a support network apart from their wife or partner.

One dad with a critically ill baby in the neonatal intensive care unit explained that his family “weren’t the talking sort”, so he had no chance to debrief about what was happening to his precious baby. His wife, the baby’s mother, was understandably distraught, and he was wondering how to tell his workmates about his family situation and explain why his concentration at work was so poor. Finding other dads going through the same changes, for example at prenatal classes, is a good way to talk to someone who understands.

A key decision that usually has to be made before the birth is how much time to take off work.

For many couples, this is mainly a financial question. The Federal Government’s Dad and Partner Pay scheme can help ease money worries, although two weeks at the minimum wage is not exactly a bonanza. In making this important decision, understanding how important fathers are and how bonding happens can be useful.

Daniel has decided to take two weeks’ leave, adding that he wants to be “as supportive as possible” of his wife. He has some painting and minor landscaping in mind, and since he is self-employed he can take more than the two weeks. However, when he thinks ahead to the time after the birth, he says a fortnight will be enough because “I wouldn’t want to be there if she didn’t need me. I’d rather be back at work.”

Daniel’s commitment to supporting his wife’s mothering is spot on. What is missing is his understanding of his own connection with his newborn. While he won’t lose the chance to bond forever if he goes back to work too early, understanding how important bonding is for his child’s future will help allay feelings that instead of playing with his baby he should be doing ‘something useful’. He can make the most of his circumstances by ensuring when he is at home he has one-on-one time with his baby. Making time for lots of playful interaction, along with the usual changing and feeding routines, is an important part of fathering. In many workplaces, it’s possible for mothers to take their baby along to show workmates. Dads can do this, too.

They are figuring out how to connect with their newborn baby amid all the ups and downs of starting a new family. Being a father is a complex, challenging job that takes guts, thinking, an engaged heart and a willingness to make mistakes. Fortunately, it’s the best job on the planet.

Dr Richard Fletcher is Associate Professor – Fathers and Families Research Program at the Family Action Centre in the Faculty of Health at the University of Newcastle.