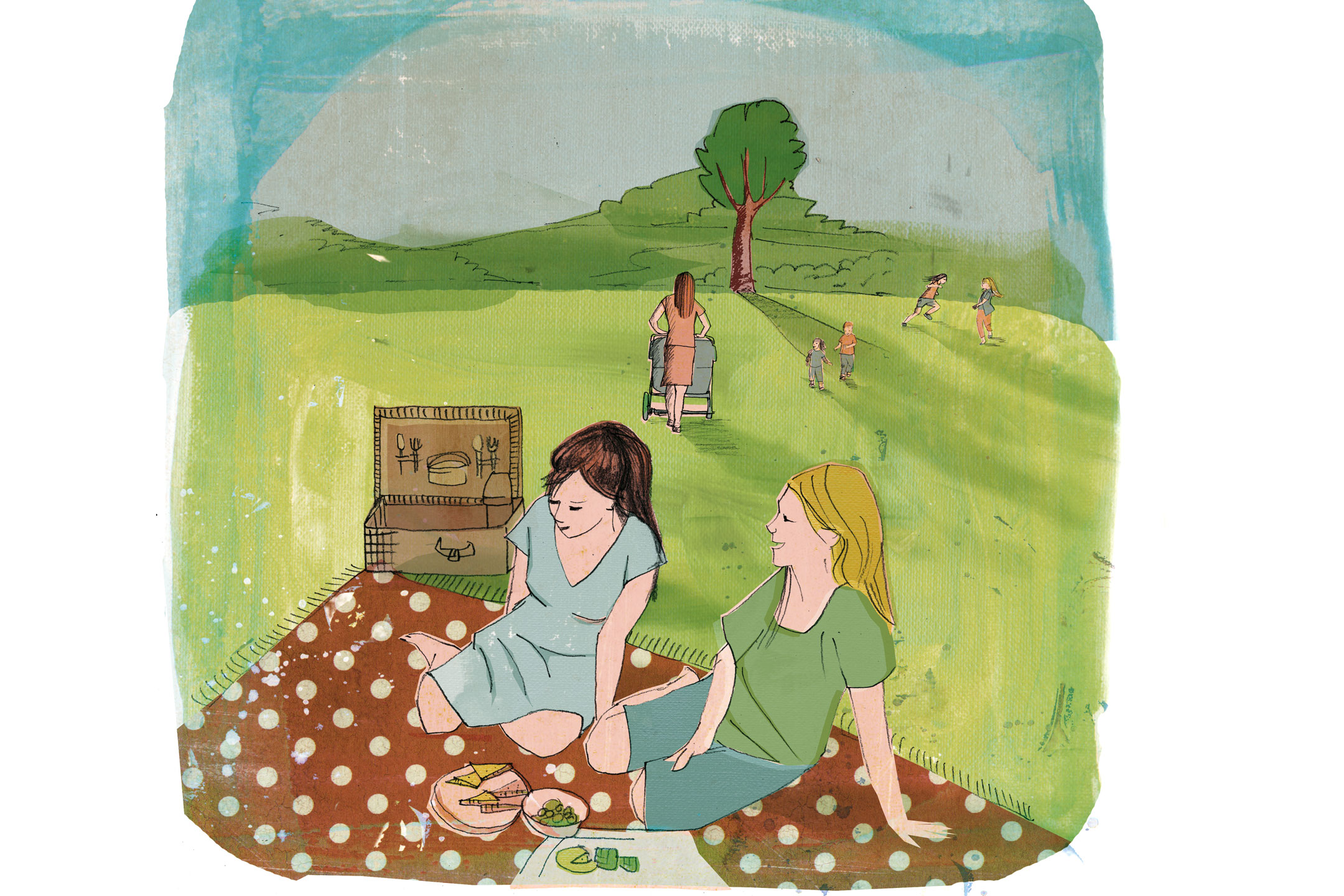 When Ondine Sherman meets another parent at a picnic, she is prompted to wonder about some social vagaries.

“We’re going for a picnic,” said my friend Vanessa. “Beautiful spot, heaps of kids, and a riverbank where they can run around.” I agreed. Me, my husband Dror, our nanny Efrat, five-year-old daughter Jasmine, and Dov and Lev, our identical twins who had just turned three, filled the seven-seater. We drove down and found the group. Jasmine ran off to play with her friend, and Dror chatted to the men as they opened beers. Efrat took Dov and Lev for a walk in the pram to check out the area.

“What a gorgeous day,” I said to Vanessa as I sat down on the picnic rug between her and the cheese platter. Scores of kids were laughing and running in an angelic manner. The sky was blue, wide and clear of clouds. Even the grass was a brighter shade of green. Vanessa became involved in a conversation to her right and I sat enjoying the speedboats and waterskiers parading past.

“Hi, I’m Emma,” said a blonde woman as she sat down beside me. “Nice to meet you,” I said, smiling. “You have kids here?” “Yeah – they are mine there,” she said, pointing to two pretty blonde three and four year olds as they ran past. “You?” she asked. “Jasmine’s down there next to the pier,” I said, pointing proudly. I wanted the moment to never end, like a sun-kissed worn photograph. “And I have twin boys as well,” I added cautiously. “Wow – hands full! Do they get along with each other?” “Yeah, pretty much. It’s nice they have each other,” I said, my voice unsure. We sat in silence watching the kids play.

I gave Lev a ferocious kiss on the soft pale skin in the crook of his neck, and looked up at Emma. Awkward. Was it my responsibility to explain my child,  or hers to ask what was wrong or say something nice and accepting?

“It’s great getting the kids out of the city, it’s so…” I started to say, but stopped as I saw Efrat parking the double pram with Dov and Lev in it behind me. Its massive structure threw a shadow over the picnic rug. “Going to the toilet, back in a minute,” Efrat said, walking away. Immediately Lev started whining, which sounded like a cat’s meow, his eyes filling with tears. Dov, luckily, seemed happy to chill. I stood up, still paused in mid-sentence. “Come on Levy,” I said, manoeuvring his stiff arms out of the straps. His muscle tone increased in response, causing his bottom to suddenly drop. I scooped him up before he slipped down onto the wheel of the pram, swiftly turning him around with my right arm as my left pushed the pram closer to the rug.

Lev flopped onto my lap like a puppet with no strings – his muscle tone had swung to the other extreme. The handkerchief around his neck was soaked with drool. I wiped his leaking open mouth – drool is never a good look in company. Emma looked at him, then back at me. The twins did not fit this scene, with its sun-kissed feet running, pastel-pink skirts flying and perfect families laughing.

I gave Lev a ferocious kiss on the soft pale skin in the crook of his neck, and looked up at Emma. Awkward. Was it my responsibility to explain my child, or hers to ask what was wrong or say something nice and accepting?  Emma and I sat quietly beside the sparkling river. I tickled Lev’s stiff little feet trying to get a response. His smile was beatific and I hoped it would encourage her to say something.

Think. I could not find the right words. Possibilities raced through my mind: maybe, ‘They’re developmentally delayed’. But was this even correct? ‘Delay’ was hardly the right description, as it implied catching up was possible. The truth: ‘Rare genetic condition, both boys affected, no known cure, prognosis grim’? Too much information for someone I didn’t know. Perhaps, ‘They have special needs.’ This was the phrase I most liked to use but, really, the meaning was open to interpretation. I suppose that’s why it appealed to me. It could describe a food allergy rather than this flopsy bunny on my lap, and therefore didn’t really provide any useful information. ‘They have problems.’ Well, that sounds weird. Don’t we all?

I smiled and so did Emma. The melting brie on the cheese platter had drawn people to its side, and new conversations had started to our right. “Nice talking to you,” Emma said, gracefully moving on to chat to others. I hugged Lev tightly and arched my back over him, like a mother bear sheltering her cub. Resting my chin on his shoulder, I whispered into his ear, “It’s okay, Mummy’s here.” Everything will be okay.