Posted at 09:42h in Education, Uncategorized by admin

“No Daddy, you don’t understand. If I have a two dollar and a one dollar they’ll let me have anything. Not just what Mummy says I can have…” Kirsten Ehrlich Davies learns the true value of a dollar.

We started giving pocket money to our six-year-old daughter, Becca, in order to teach her the value of money. My husband, Ryan, wanted Becca to appreciate the sense of reward and security achieved through prudent saving. I hoped pocket money might teach her the value of individual coins. According to Becca, the 50-cent piece is the most valuable coin because it has the fanciest edges. Five cents comes next because it’s the “prettiest”. And regardless of individual value, two coins are always worth more than one.

Becca’s view of pocket money was simple. With one dollar a week in her possession, she could buy anything she wanted. Until now, Becca’s chief source of income has been the export of teeth to Fairyland. With the cost of living set at six teeth for a Barbie doll, and a salary cap of four teeth per annum, one dollar a week seemed like a staggering escalation into wealth.

“All my own dollar!” Becca breathed on the inaugural pocket money morning. “I can buy anything I want to now. Anything!”

“Well yes, but remember one dollar isn’t very much on its own,” I told her. “Every week you get one more dollar, and if you keep them safe, eventually you’ll have enough money to buy something really special.” But some kind of drought had affected the tooth market recently, so Becca was in no mood to be thrifty. She had a dollar of her own and she insisted on spending it. 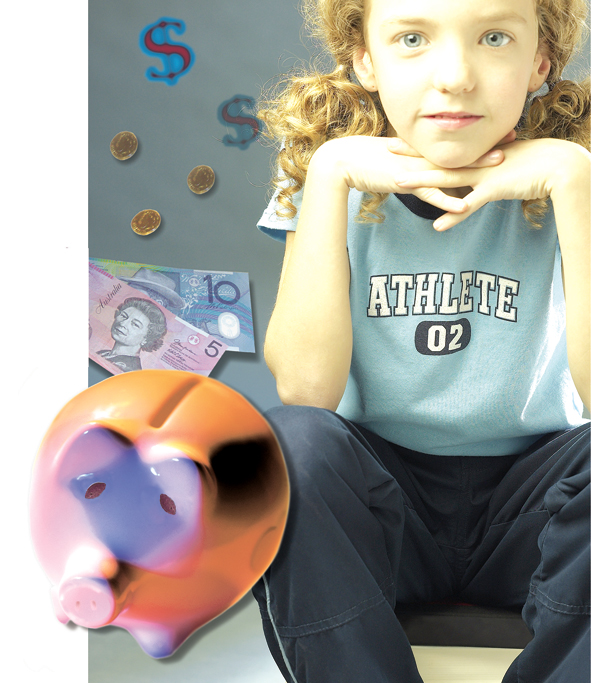 Becca and I spent a long weary morning searching for an item priced at a dollar, but we found nothing to equal the mystical power and promise of an actual gold coin. Becca became irritable and despondent, but was determined to spend her money, no matter what. Finally, she discovered a tiny ornamental cat – “with real fur! Look Mum!” – curled up asleep in its own little basket. Hers for a dollar.

“Are you sure this is what you want?” I asked. “You know you can’t play with it. We’ll have to keep it in the glass cabinet and it’s so small you probably won’t even be able to see it…”

“It’s mine. I’m buying it,” she said firmly and took it down from the shelf. Flushed with pride, she took her place at the counter to pay for the cat herself, and then – “Mum! Mummy!” she hissed. “I left my dollar at home.”

“Well, you’ll have to buy the cat another day then,” I told her. “You can’t buy it if you don’t have the money.”

Becca’s eyes filled with tears and her whole body drooped as she sobbed brokenly. I knew exactly how she felt. It was past my lunchtime too.

“Fine,” I snapped. “I’ll lend you the money. But then you have to give me your dollar when we get home. Do you understand Becca?”

She sprang up again, as straight and bright as an artificial flower. “Oh, yes Mummy! Thank you!” she beamed, and handed her precious kitten to the man behind the counter.

I don’t recommend attempting to teach a child the concepts of borrowing and lending, at least until the child can appreciate the purely symbolic value of possessing money. Once we were home, Becca was hurt and outraged to discover that I wanted her precious gold coin back. “It’s mine,” she sobbed. “You gave it to me. It’s mine to do anything I want with. Anything.”

“Yes, and you bought the little cat, remember?” How could she forget? She was still clutching the thing in her hand.

“But that was at the shop,” she wept. “The man gave it to me. He… he was really nice to me.” Oh dear. Rather than teaching my daughter the value of money, I’m training her to become a long-lashed freeloader.

Ryan took over Lesson Two of Junior Money Management. He sat Becca down with a toy catalogue and told her to choose one thing that she really, really wanted. To his horror, she selected a battery-operated magic mirror guaranteed to declare “Oh Princess – you are the fairest one of all!” to whoever looked into it.

“Are you sure that’s what you want?” he pleaded. “Look at these construction tubes – you can make a robot! What about an ant farm? Or the archaeology kit?”

“I want the magic mirror,” she insisted. So, sighing heavily, Ryan cut out the picture of the magic mirror and glued it onto the cardboard sheet he’d proudly labelled Becca’s Savings Chart. Becca shifted forward in her seat. This was getting interesting.

“See these numbers here on the picture Becca? That’s how much the magic mirror costs. So that’s how much money you need to save starting with one dollar a week. Do you remember Daddy’s rule? Always save…”

“…40 per cent of your income,” chanted Becca, her eyelids drooping.

“Right. So 40 cents goes into your piggy bank here. That leaves 60 cents a week towards your magic mirror. Now we’ll trace coins onto the chart so you’ll see how many you need for the mirror. And every week we’ll tape your pocket money over the tracings…”

“… until I have enough to buy it. But first Daddy… can I save up until I have a two dollar and a one dollar?”

“Yes, you can save three dollars first if you want. But what for?”

Becca leaned in confidentially. “Daddy, did you know, that with a two dollar and a one dollar, I can go into the school canteen and I can buy anything! Anything I want!”

“But sweetheart, Mummy already lets you have a lunch order once a week. You can just tell her whatever you want from the canteen.”

“No Daddy, you don’t understand. If I have a two dollar and a one dollar they’ll let me have anything. Not just what Mummy says I can have…”

Ryan and I are still working on teaching Becca the value of money. But we’ve suspended the dispensing of pocket money to her for now… at least until she learns the difference between anything and everything.