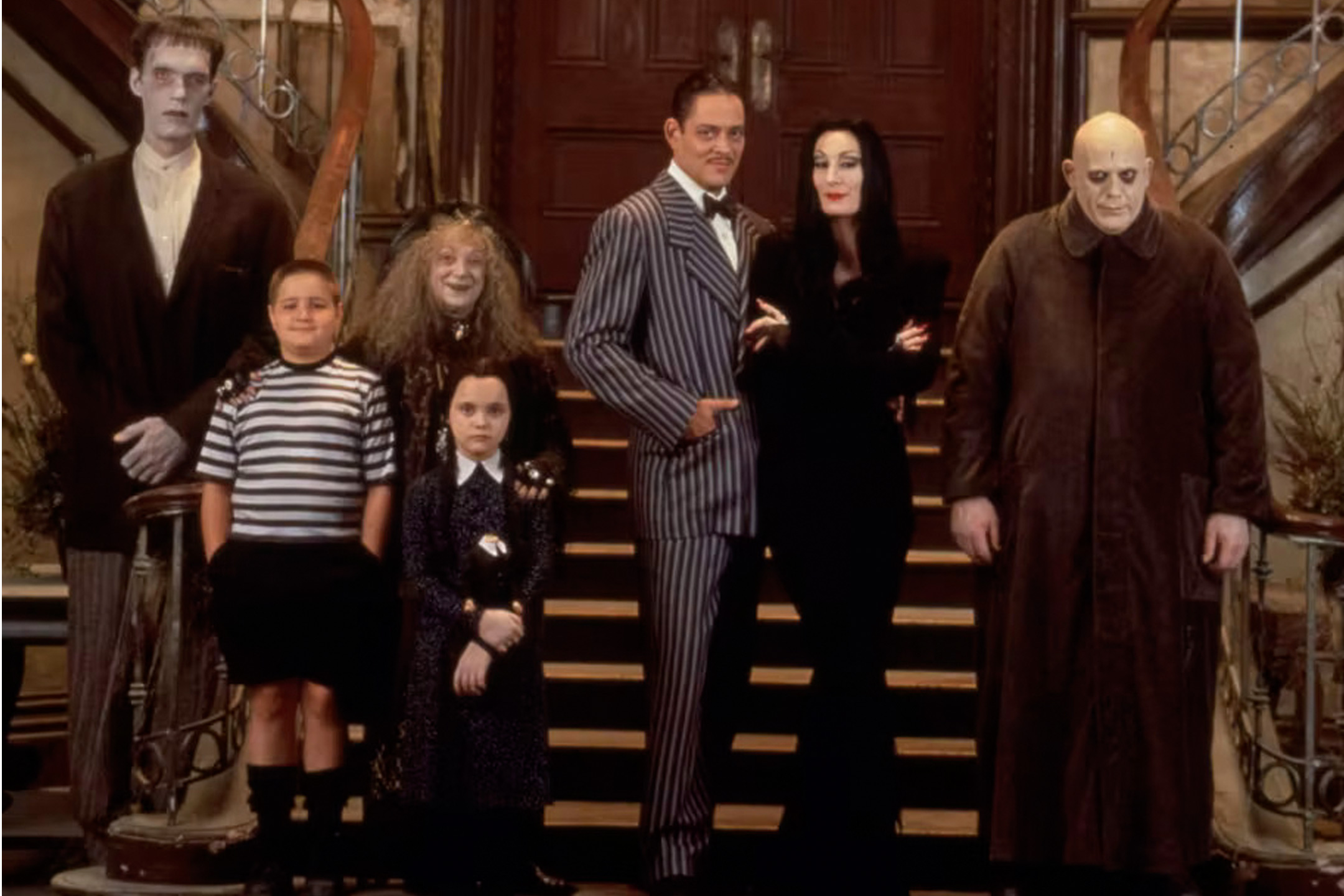 30 Dec Review: The Addams Family is still the perfect blend of horror and comedy

It’s 30 years since The Addams Family hit the big screen, writes Daryl Sparkes. It is still the perfect blend of horror and comedy.

The dark side of films has always had a strong relationship with the light side. Mixing comedy with horror often ensured a hit even in the early days of cinema –comedian Harold Lloyd was making such films as early as the 1920s.

This combination of light hearted horror worked on the small screen as well.

In the 1950s and 1960s, family sitcoms The Andy Griffith Show, My Three Sons, The Beverley Hillbillies and Leave it to Beaver were all hugely popular. But the 60s were also a time of the counter-culture revolution. Beatniks, hippies and a general anti-establishment youth culture progressively dismissed the conforming stereotypes of the wholesome family.

From this a TV show, based on a long running New Yorker cartoon by Charles Addams, was launched: The Addams Family, based around a family who, while not outright monsters, definitely played on the dark side of life.

The series itself only ran for two seasons and was dropped for poor ratings. But in the intervening years the show’s status grew.

Children of the 1960s to the 1980s discovered the reruns and grew in love with the weirdness and offbeat humour. These children grew into adults who never lost interest in one of the strangest shows ever made.

In 1991 this nostalgia culminated with the release of The Addams Family Movie.

Set around a family of oddballs whose pastimes include grave digging, cutting the heads off roses (because the thorns are far more precious) and stealing stop signs to revel in the sound of cars crashing, 30 years on the film has not lost any of its eccentric charm or quirky sensibilities.

A plot for the madness

The Addams Family Movie starts with the dilemma of attempting to contact Gomez’s brother, Fester (who has been in the afterlife for 25 years) and constantly failing. When someone claiming to be Fester turns up (the ever-versatile Christopher Lloyd), he is quickly embraced by the Addams’s as the long-lost Uncle. What they don’t know is the fake Fester is just there to find and steal their hidden riches.

But this whole story is just a flimsy backdrop to all the crazy jokes, one-liners and sight-gags that each member of the family gets up to throughout the film.

The parents, Gomez and Morticia Addams are difficult to describe. Gomez is somewhere between a 1930s gangster and a wide eyed man-child who finds wonder at everything. But he is definitely a Renaissance man: just as skilled with a rapier sword as he is with a golf club, his dance moves are unparalleled. The late Raul Julia plays Gomez to perfection – arguably even better than John Astin who played the TV original.

Angelica Huston steals the show as his wife Morticia. Wistful, sublime and ethereal, Huston mixes eroticism with playful innocence. She also gets many of the best lines.

When Gomez asks Morticia if she is “Unhappy, darling?”, Morticia smoothly supines with a smile “Oh yes, yes completely” – as though that is the ultimate state of ecstasy. Gomez looks on her with constant adoring eyes, and cannot control his unbridled lust whenever Morticia speaks French.

It is a love fuelled by constant romance. As Morticia says, “Gomez, last night you were unhinged. You were like some desperate, howling demon. You frightened me … Do it again!”. And when Gomez is racked by angst Morticia tells him “Don’t torture yourself, Gomez … that’s my job”.

Every horror movie needs a creepy kid. And the Addams children, daughter Wednesday (Christina Ricci) and son Pugsley (Jimmy Workman), fit the bill nicely. Wednesday is like a mini version of her mother, but in a much more dour mood, with an intense interest in instruments of torture and execution. Pugsley is more playful, always following Wednesday’s lead – to the point of climbing into her electric chair to play her game of “Is there a God?”.

Horror is supposed to make you frightened; comedy is supposed to make you laugh. They’re genre polar opposites. Then why do horror-comedies work? The Addams Family is so accessible to a wide audience because, while it plays with the dark side of life, it’s a horror film without any of the horror. The darkness is very low level, and it isn’t represented as being real.

This is why children and people who don’t like real horror films love it. They can dip their toes in the horror genre but it is played for laughs, not scares.

In a way, it has a been a gateway film for when children grow older and watch real horror films. The Addams Family introduces them to the dark world, but there’s nothing to fear. For now, it’s just fun.

Overall, though, the one thing The Addams Family movie teaches audiences is regardless if you’re a witch, or a ghoul, or even just a hand, the most important thing in life is family.