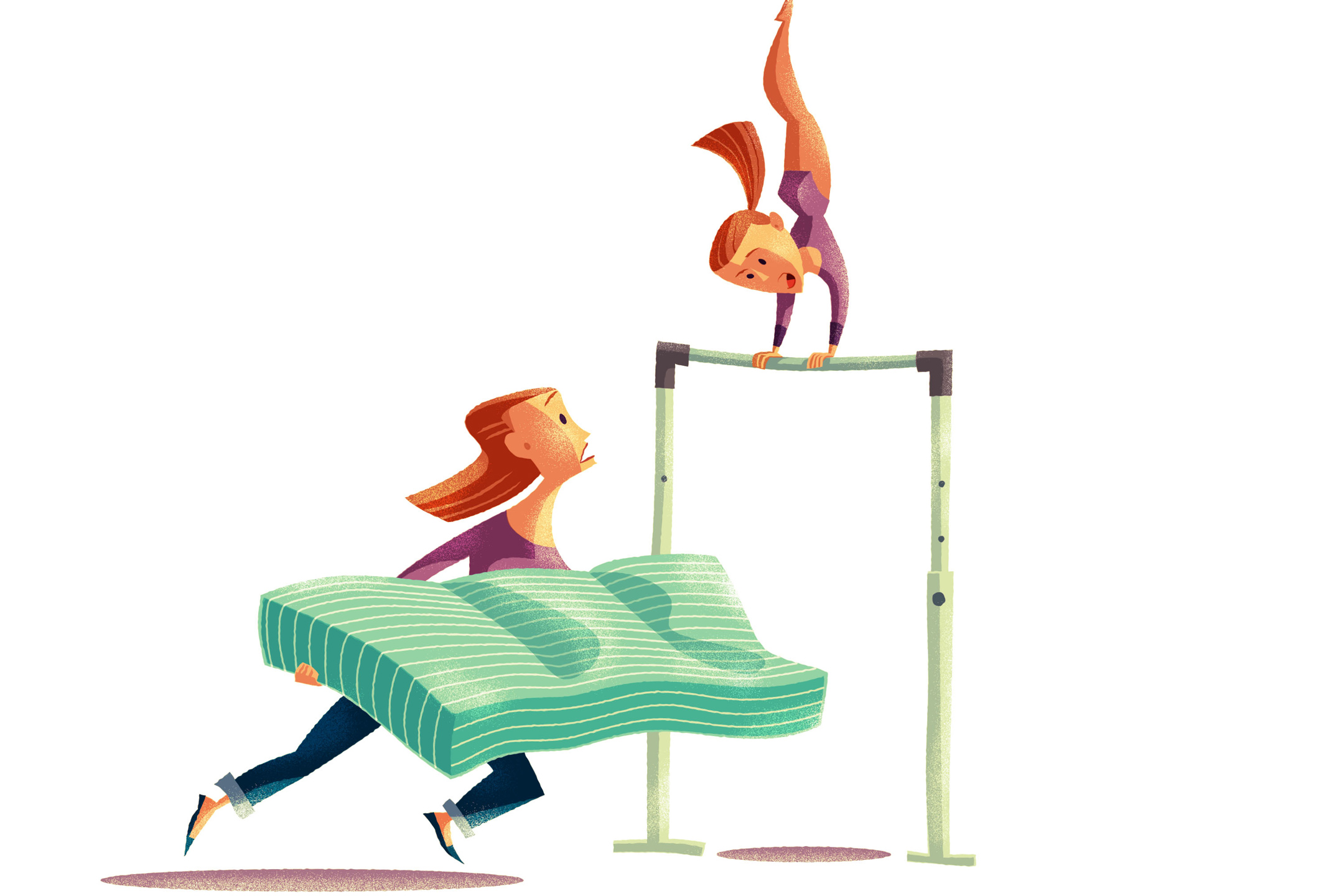 Posted at 06:25h in Validate by Staff

Alex Field’s stomach does somersaults when her daughter does gymnastics

So often my role changes due to the varied needs of my five children. The very thought of taking on new after-school activities, or even changing the ones I have so carefully planned out, is fraught with danger. Recently, in addition to my roles as ballet mum, soccer mum, rugby mum, netball mum and all-round manic mum, I have become a gymnastics mum.

Our daughter first got involved in gymnastics at a week-long holiday program, and was picked to train in a squad. After a term of 6am starts, I was flagging. I pulled her out.

A few months later I put her into another holiday program run by a different club. She was picked again for squad and after two months at this club, she was competing against other girls in the State [CC: Territory]. One of her coaches pulled us aside and said that our daughter should really be competing up a level and that more hours of training were required. I should have been delighted. Obviously the coach thought our daughter had potential. But I called my husband and said I really did not want her to pursue gymnastics.

I know I should be proud – and I am – but I am also fearful to the point of terror that she could injure herself terribly. The injuries that can occur in gymnasts from their flying off the bars or falling off the beam can be brutal. I am all the more fearful because I have an 18-year-old son in a wheelchair.

Recently, my eldest daughter came with me to watch her sister in a gymnastics competition. I sat between her and a friend. After my daughter had finished her beam routine, my friend suggested that it would be a good time to start breathing again. At dinner that night, my eldest daughter gave a demonstration of the sighs and gasps I had emitted as my youngest had wobbled and flown on various apparatus. I had arrived home exhausted from the stress. My daughter was exhausted too, but had her ribbons for comfort and seemed content with her efforts.

I saw other mothers around me who were so proud of their daughters’ achievements. They arrived with video cameras and regular cameras to capture the moment for posterity. I, on the other hand, sat awkwardly, hoping my daughter would get through the competition free of injury. I had even forgotten the camera. When my daughter did get on the podium, I had nothing to record the moment. My eldest daughter put her hands up to take a pretend picture as all the other mothers crowded around with their cameras. My eight-year-old daughter looked at us with a wry smile as if to say, ‘That’s my mum – she’s the one who forgot to bring a camera’.

I was just grateful that she was uninjured. She had had two falls from the beam during the competition. She was upset with herself because she had, in her words, “stuffed” her beam routine.

I am in awe of her ability to focus and the precision with which she does everything. She has the advantage of youth and, unlike her mother, she is fearless, flying through the air at speeds that leave me gasping and her thrilled.

I am not a comfortable gymnastics mum, but I am trying. Next time I go to a competition, I will do my utmost not to be a bad parent by heaving and sighing throughout my daughter’s routines. Next time, I might even remember the camera and be able to look back on those routines fondly and without fear.