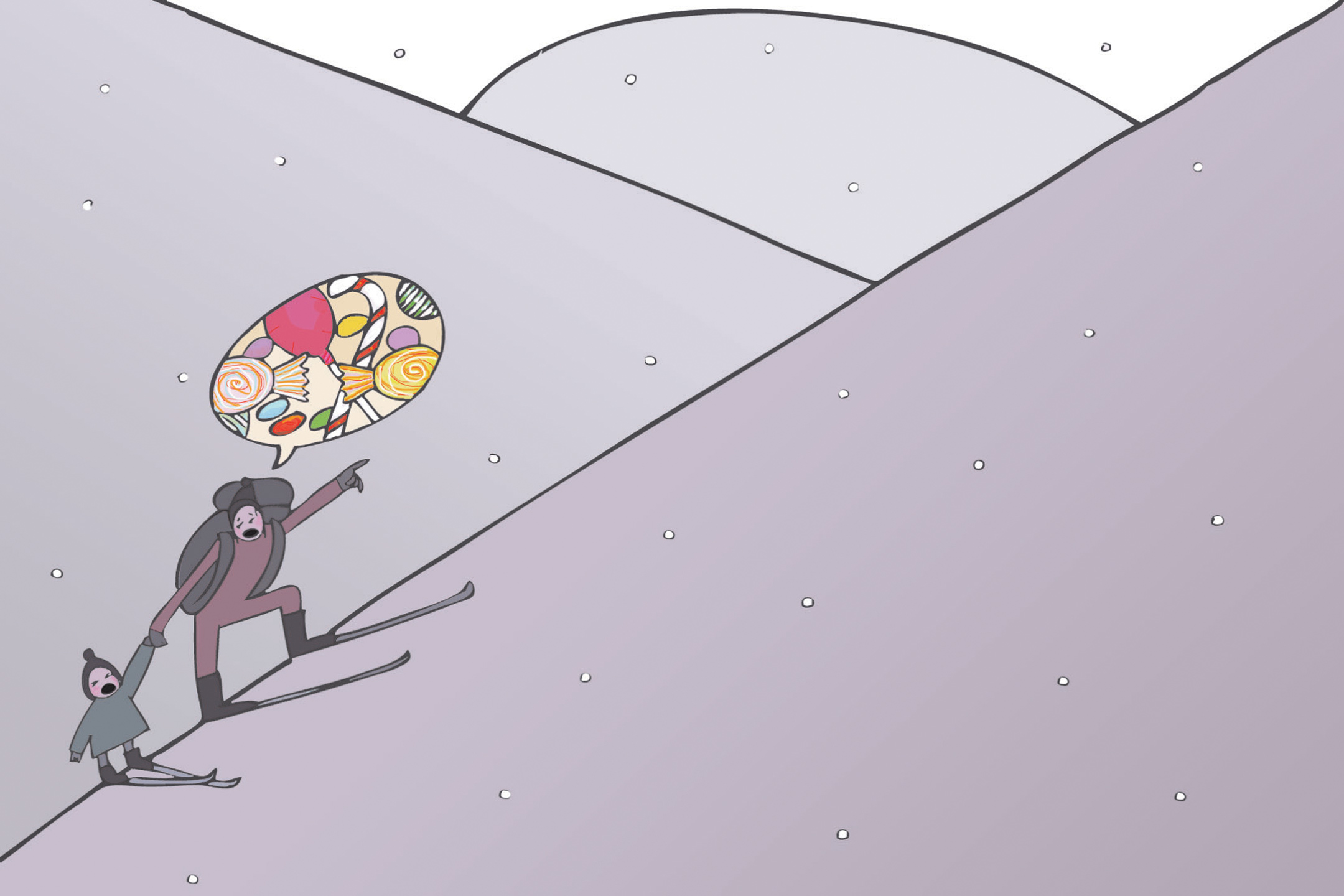 Posted at 15:07h in Celebrate, Editors Picks by Editor

Cathy Watson finds that teaching her three-year-old son to ski is an uphill battle.

Why did we do it? Skiing was something my husband and I enjoyed as single people and in our early years of being together, before children. Blissful, exciting, indulgent, expensive fun. These days it seems like preparing for labour. Months before our most recent trip, I worked out our accommodation, clothes, and menus – packing, unpacking and repacking. I sorted out mountainous volumes of gear, borrowing, buying and hiring. Somehow we squeezed ourselves, our three children, skis, gear and food into our Mazda sedan.

We loved to ski. Therefore, our children would love to ski. Or so we thought. But unpredictably, sometimes children refuse to comply with parental wishes. This is a regular occurrence at home, so why it didn’t occur to me that this could happen on the snow now mystifies me. Several years ago, when he was four, our eldest son had a mighty tantrum on the snow upon his first attempt at cross-country skiing. Repeatedly trying to disentangle skis and stocks and child from the snow, while retrieving beanie and goggles and gloves from far-flung icy places, still didn’t stop us from attempting to teach our second child to ski. As with childbirth, the relentlessness and intensity of the experience dimmed with the passing of time, and each year we approached the snow with a slightly improved sense of reality and slightly dampened enthusiasm, but our positive outlook remained.

Finally, our three-year-old (and youngest) son was too big for the backpack and ready to ski. Our older boys took off up the hill with ease. They reached the top within 15 minutes. Two hours later, I was still struggling to coax Oli up the lower slopes of the hill. Maternal patience is generally more pronounced when others are within earshot. My tone is softer, calmer and more encouraging. But before too long, most others on the planet had passed us and I began to wonder whether night would fall before we made it halfway up. Perhaps our fossilised remains would be found as the snow melted.

Step by microscopic step, I encouraged my son up the hill. The promise of a lolly at the next tree metamorphosed into a packet of lollies at the next blade of grass. Three-year-old legs are very short. But surely I had seen them move very fast. Today, however, everything passed in slow motion and the minutes dragged. I ran out of songs to keep his mind off the effort. Fuse disintegrating, I ran out of nice, encouraging, mother-like things to say. My supply of sweet-mother disposition had dissipated as the population thinned. Finally, I hissed at him, “Be quiet and just enjoy this lovely skiing. Just move your stupid legs.” “Don’t say that,” he berated me. After a few hours, I’d had enough.

I had to remind myself that I was a grown woman and that I was in the snow, in the fresh snow, with my beloved youngest son. I, too, had a very bad day when I learned to ski at the age of 20. The snow is very different from any terrain my son had encountered before, and he was, after all, only three. He pleaded with me to pull him up the hill. But this would not teach him how to ski. Surely I would be failing if I took his stocks and pulled him up. But then, with a flash of brilliance, I realised that getting him to ski up this hill alone was not necessary. He would be less tired, less cold and I would be spending less time watching grass grow on this uphill slope, if I just yanked him up. I grabbed his stocks, put my skis either side of his, and power-walked up the hill. No conversation, no songs, no lollies; just me and speed and my recalcitrant son who was going to learn to enjoy the snow whether he liked it or not.

And so began our four days of skiing. We put in the hard yards. Teaching a small child to ski takes time. But, almost imperceptibly, he grew more confident and began to actually ski. And we celebrated each step and accomplishment on the snow and delighted in his newfound enthusiasm.

Like the pain of labour, the memory of my other two children learning to ski must have been filed somewhere in a compartment that is hazy and indistinct. And I know that, over time, the memory of this experience of the early hours and days on the snow will change. My mother’s assertion that her children rarely fought and slept through from an early age attest to that. I, too, will have my memory clouded by the passing years. But I will need reminding of these days in years to come when my sons are bound to ask if I’d like to teach my grandchildren to ski. I must remember to smile sweetly at my sons and say, ‘No darlings. That is a particular joy reserved for parents alone.’ And they, too, will discover the deep reserves of patience and love a parent can have when a child struggles to discover a new skill. They will put in the hard yards. And, just like us, they will look at their children with astonishment and pride, and recognise that even the most laborious aspects of parenthood are more than worth the effort.