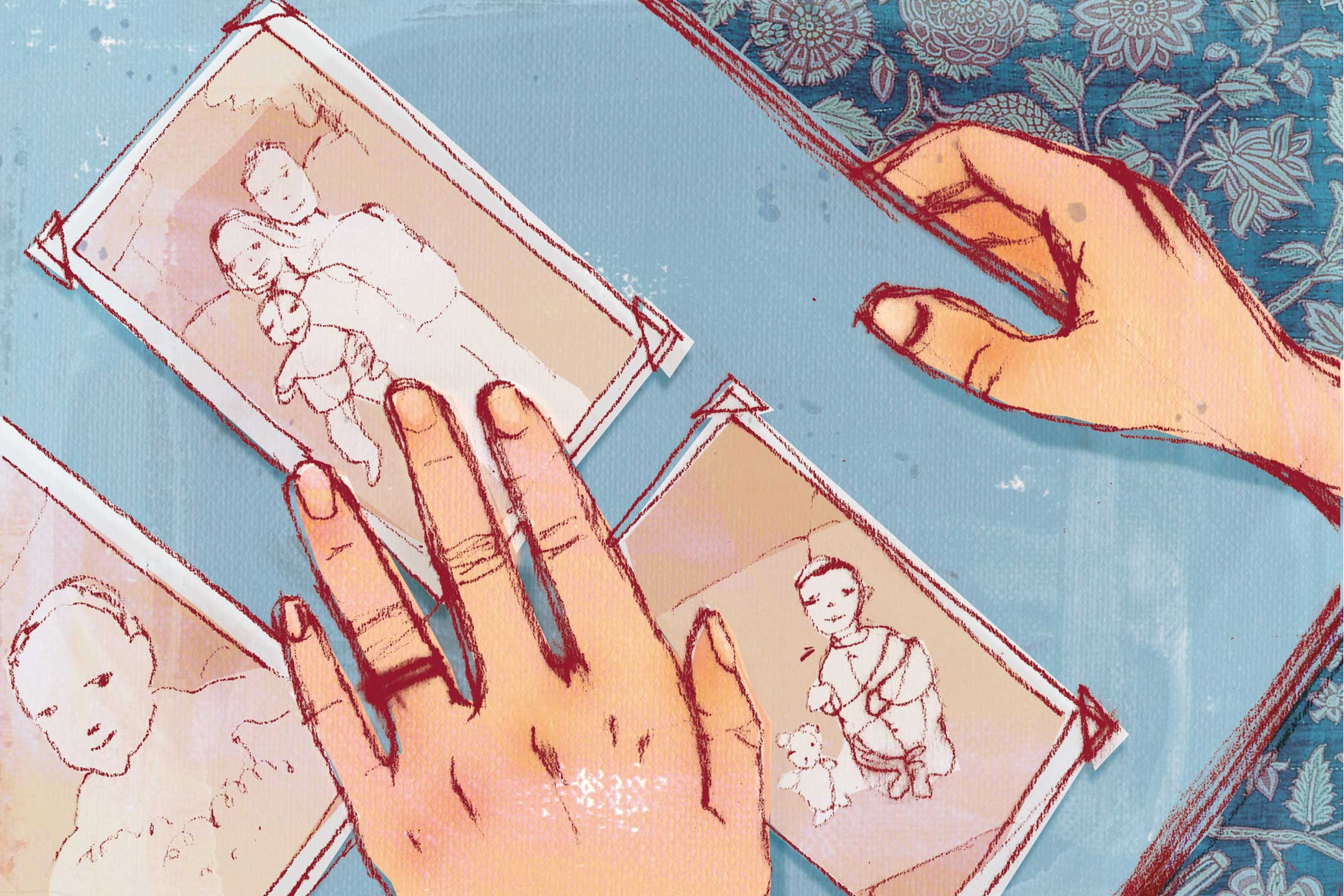 Julie’s story is almost too sad to tell. None of us wants to believe that a mother could lose two children by the time they are the age of one to a genetic disease, and her husband in a car accident. It is too much for us to hear. But Julie doesn’t have a choice. This is her life, like it or not, and she has found a way to live it.

“Ross and I always wanted to have children,” says Julie. “We’d been trying for 18 months with no luck. Everyone said it was because I was overweight.” Then it just happened. Ross and Julie were over the moon. “Ross had a daughter from a previous relationship, so for him to be a dad again was very special.”

Everything went okay until the end of the pregnancy, when the doctor felt that the baby wasn’t moving as much as is normal. But when Montanna arrived, she seemed fine. “We were told, ‘You’ve got a perfect baby’.” But at three months, the doctors discovered that Montanna wasn’t moving like a normal baby should. “We took her to our local doctor because she had a cold and he said, ‘I’m not worried about the cold, but she’s weak, she’s got no reflexes’.” They were sent to a paediatrician that afternoon and then to the Royal Children’s Hospital in Melbourne. There, they were told that Montanna had SMA, a rare disease of the muscle, which causes weakness. Many affected children die in the first year of life.

“We basically got told, ‘Take her home, there is nothing we can do for her, love her as much as you can. She’s not going to see her first birthday.’ We had a five-hour trip from the hospital to our home. We sat in the car, stunned. We couldn’t speak. How had this happened to us? It was the realisation that our kid didn’t just have a disability, our kid was going to die.”

Julie felt terribly isolated by the diagnosis. “Just to be able to talk to someone who had been through it would have been so beneficial to me. I had so many questions about SMA, but everywhere I turned to seek answers, I found nothing. I went into denial. I thought, ‘This is not going to happen to my kid, she is going to get past 12 months of age, I’m going to show all these people that I’m the best mother in the world’. Ross reacted differently. He went and researched what was going to happen and how. That research did help prepare us in the end.”

When Montanna was six months old, she got pneumonia, a life-threatening illness for a child with SMA, as the muscles that help them breathe are weak. “The doctors came in and said, ‘She’s got 24 hours to live’. I had to stand up and be counted then. We asked them, ‘If this was a normal kid, what would you do?’ and they said, ‘We’d treat the child with medication and put them on a ventilator’. So Ross and I said, ‘That is what we want you to do for our child’. She survived that illness. Doctors see a diagnosis of SMA and they think ‘Dead, or might as well be’. Whereas we knew that SMA would kill Montanna in the end, but we had to try everything we could so that we didn’t feel like we had given up on her.”

Montanna made it through the pneumonia, but her condition deteriorated and she needed constant nursing to manage her airway secretions. “It was hard to get help. No-one knew how to care for her, especially where we lived, in the country. There were no services for kids with terminal illnesses. We ended up nursing her ourselves.”

Montanna died in hospital (2005). She was 10 months old. Julie believes that Montanna was waiting for Ross to come to terms with her death. “He was in that fight mode right up until 15 minutes before she died. Then we were shown an X-ray and we compared it to the one from one month before. We could both see the caving in of her chest cavity. Ross said to Montanna, ‘I understand now, it’s okay, I’ve let you go,’ and she died within 10 minutes.”

After losing Montanna, Julie and Ross decided to do something about the lack of support they had felt during Montanna’s illness. “We realised that feeling angry and frustrated was no good for us or our family. If we wanted things to be different, we were going to have to do something.” They founded the Spinal Muscular Atrophy Association of Australia to support families affected by SMA. Even though SMA is rare, there was a definite need: SMA is the most common genetic condition causing death in children under two.

Then, 11 months after Montanna died, Ross was killed in a car accident. Julie was four months’ pregnant at the time. “We knew the baby had a one in four chance of having SMA. We had talked a lot about testing: I wanted to know, but Ross didn’t. And we didn’t want to take the risk of having the CVS [chorionic villus sampling] and losing the pregnancy. When Ross died, how could I go and have the test? Plus, this child I was carrying was the last link that I had to him.”

Julie found that some people disapproved of her decision not to test. “I did a radio interview and people called in saying I shouldn’t knowingly have a child who could be affected. But, for me, whether I spent one minute or one hour or one day with my child, it was worth it to meet her. I wanted to know her. She was of value to me.”

Julie’s second daughter, Zarlee, lived for a year (2007). Julie remembers that time as being full of joy. “I got one year’s worth of beautiful memories that I can look back on. With Montanna, I felt angry a lot of the time. Angry that I couldn’t fix anything, and that no-one could help me. I was determined it would be different with Zarlee. Zarlee’s life was fun; we had a ball.

“I was much more up-front with people about her illness. With Montanna, I stayed at home and didn’t talk about it. I couldn’t go there. With Zarlee, I knew what was going to happen. I knew I could survive it. So I wanted people to know that Zarlee had a physical disability and was going to die one day, but right now she was okay and I wanted her treated like anyone else.”

After losing Ross and her daughters, Julie sought professional counselling, which helped her work through her grief. She also found support from other families affected by SMA. “Sometimes I would find myself sitting and having a cry with someone else who had been through the same thing. The support group has helped me with my losses because I have been able to talk about it. My story is not too sad for them to hear.”

Spinal Muscular Atrophy Australia Inc. is a not-for-profit, registered, tax exempt charity with deductible gift recipient (DGR) status. The charity receives no Government funding and relies on sponsorship, events and generous donations so they can provide their support services to their SMA families. The charity is governed by a voluntary committee of management.