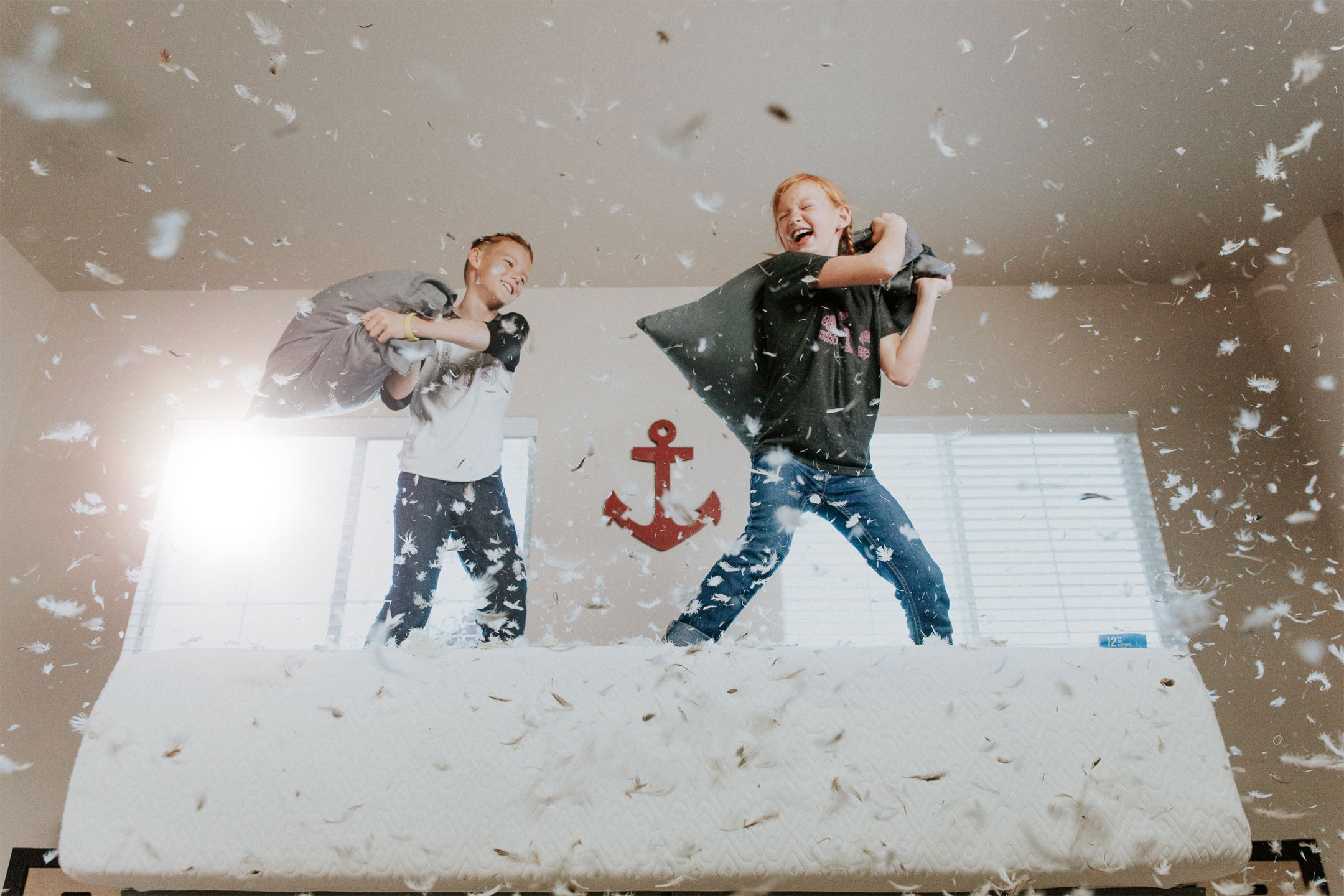 Posted at 06:16h in Editors Picks, Validate by Guest Contributer

This mum discovers that the road to school holiday happiness begins with herself.

The school holidays started well. At 8am on the first Monday I was still under my doona, enjoying a peaceful lie-in. I took a deep breath and thought about how little I was going to do – no getting up to the alarm, no making lunches, no remembering to wash the uniforms. Bliss.

Then I heard the bickering start. “You can’t have that. It’s mine!” “I can have it. You have to share!”

I didn’t get up; I just kept listening, hoping the situation would be resolved without my interference.

Then the seven-year-old stormed in, followed closely by her little brother. I opened my eyes. “Mum, I was using the pillow to make a cubby…” “But it’s my pillow and I want to use it to make my cubby.”

I got out of bed to deal with the problem, but as I walked into the kids’ bedroom to survey the construction zone, I saw only mess and disaster. The bliss disappeared and I started shouting. “Look, you have a pillow each. One pillow each. Who pulled all of the books off the bookshelf? And why aren’t your beds made?”

Then I went into the kitchen and continued. “What’s this on the floor? Oats? Why is the milk still sitting on the bench? Who got the glue out? If you don’t put the lid back on it’ll dry up! There are 100 marbles all over the house. Put them away or I’m going to vacuum them up!”

My rant eventually petered out, but the household vibe remained tense for the rest of the day, and the next two.

There were some great moments, where the kids played nicely and I felt calm, but overall things weren’t good.

There was a lot of fighting, demanding, negotiating and refusing. By Thursday I was wishing the holidays were over. So I did what I always do in these situations: I got out two pieces of paper, drew 16 boxes on each and blu-tacked them to the wall. “Here are your reward charts,” I said to the kids. “I’m going to give you ticks for extra good behaviour. Once the boxes are full you get to do something.” “Like borrow DVDs?” they both suggested, jumping up and down. “Yes,” I said. “That’s a good idea. I wonder how long it will take to get all the ticks?”

The kids seemed excited and I was hopeful that the rest of the holidays would be easier and more enjoyable. But a few days later it was clear the charts weren’t working as well as I’d imagined. I seemed to be spending a lot of time each day saying, “Remember the DVD!” or “That kind of behaviour won’t get you a tick”.

The kids were arguing more than ever. I was cross. They were cross. It was awful.

I wondered what I should do next. Introduce some kind of punishment system? Make the kids play separately until the end of the holidays? Hire a nanny? All I really wanted to do was lie on my bed and stare at the ceiling.

Then I realised what the problem really was: me. I was feeling miserable and had for a couple of weeks.

There was no particular catalyst. Feeling terrible made me frazzled and short-tempered.

“I’m making myself a reward chart,” I said to the kids. I drew 16 squares on a piece of paper and wrote ‘Mum’ at the top. “What should my prize be?” “A special treat!” my son suggested. “What about a drawing and a big kiss?” I said. My daughter ignored this and wrote under the boxes, ‘Go to a cafe’. “You can have a coffee,” she said, “and we can come too.” So my chart went up on the wall next to the other two.

Ticks were specifically for acts of kindness and consideration. I was in charge of granting the kids’ ticks, and they were in charge of granting mine. It was fun. I became more aware of my grumpiness and made an effort to be funny, spontaneous and fair. The kids responded by treating each other with respect and being generally more agreeable. Ticks started rolling in.

“You can fill in two boxes, Mum. For not shouting.”

“Kids, you’ve played together so well this morning, you better each have a tick.” I liked seeing my chart filling up. I was looking forward to my reward, but I was also enjoying the new household vibe – contentment. My bad mood had lifted and the children seemed happier, too.

Very soon the three charts were full. The kids got to borrow a DVD each and I got to go out for coffee (and get some big kisses, too). I’m certainly not happy all the time, and I don’t always remain calm when things go awry, but at least I’m aware that my behaviour is infectious.