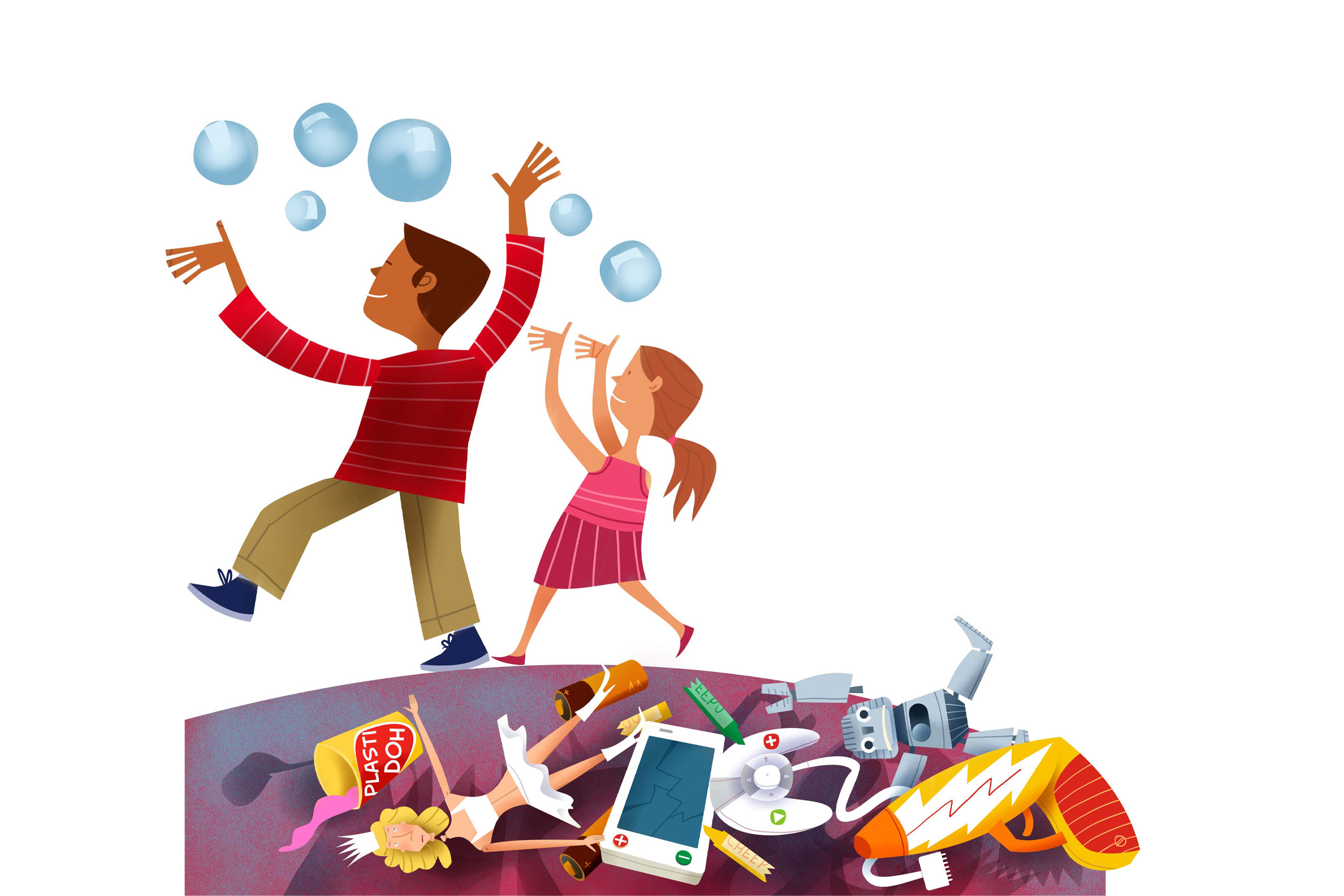 Posted at 14:41h in Celebrate, Editors Picks, Inform by admin

“Over-hyped, under-performing products have had all of their imagining already exhausted by the executives of multinational companies… There’s nothing left for the child to dream up when their toys have been loaded with features and functions.”

Early-childhood consultant Helen McAllister thinks she’s found the perfect toy for small children. It flies through the air when you let it out of its bottle and then performs little tricks. Like changing into the colours of the rainbow before landing on your child’s hand. Then it disappears right in front of your eyes. So where can you get one? Well, you can make it with a simple bubble-blowing set. “You wouldn’t find any toy as interesting to a small child if you searched through every expensive toyshop in the world,” McAllister says with conviction.

McAllister would know. A grandmother of five, she wrote a thesis on the importance of play for her doctorate of education. She is involved in early-childhood policy formation in Queensland, and has worked on play programs in various settings for many years. She has seen the cardboard-box-is-more-interesting-than-the-toy-inside phenomenon many times over, yet is amazed we all seem to forget the moral of the story. She has the same message as most other childhood experts when it comes to toys: less is nearly always more. “Particularly for younger children, the fewer rules, complexities, details or expectations in the toy, the more scope there is for your child’s imagination to grow,” McAllister says.

For under fives, McAllister recommends toys that prompt pretend play, such as wooden food and cooking sets, and even simple stacking blocks that fit inside each other. “They can be used in so many ways – for stacking, pouring water and sand, sorting and counting games.” For active fun, McAllister thinks you can’t go past plastic hula-hoops, for both boys and girls. “They are one of the simplest toys ever designed, and yet even the littlest kids can find so many things to do with them when playing inside or out.”

Mary Chakires owns a small toyshop in Melbourne. She avoids stocking the types of toys that have been heavily marketed. She says that her aim is to provide an alternative to “over-hyped, under-performing products that have had all of their imagining already exhausted by the executives of multinational companies… There’s nothing left for the child to dream up when their toys have been loaded with features and functions.”

Chakires says that it’s inevitable that some children and their parents come into the store specifically looking for what they’ve seen on TV, or for the brands that are familiar to them. “[But] our little shop survives on a solid base of customers who see their children’s eyes light up at the brightest, simplest toys, and who share my belief that the toys that encourage basic values and experiences are usually those outside of the heavily marketed brands”.

“Children aged five and up are at a great stage to really encourage making and creating, so crafts and related items can be high on your list in this age group.”

Kathy Walker is an author and director of an education consultancy. She agrees that the pressure on parents to buy the latest toy is often difficult to ignore, but important to control. “When a kid says ‘Everyone else has got one’, maybe 50 per cent at most really will,” Walker says. “It’s okay to say no – in fact it’s a part of life. Children must learn that they can’t always get what they want when they think they want it. The younger they are when we say no to them, the easier it is when they get older. And those children are often happier, since they don’t always assume that life will meet their every expectation.”

Walker recommends dress-ups for young children, and says they are better when they leave room for the child’s own storytelling. “A Superman outfit can be rather limiting, but an unusual hat or wig can be anything the child wants it to be. Kids naturally love dressing up, and a variety of exciting outfits, wigs or props will really encourage imaginative play,” she says. Giving your child an ‘experience’ rather than a possession is also recommended by many early-childhood experts. Passes to a zoo or aquarium are exciting, come with the added dimension of anticipation, and provide the child with the one thing they want and need most – your time. 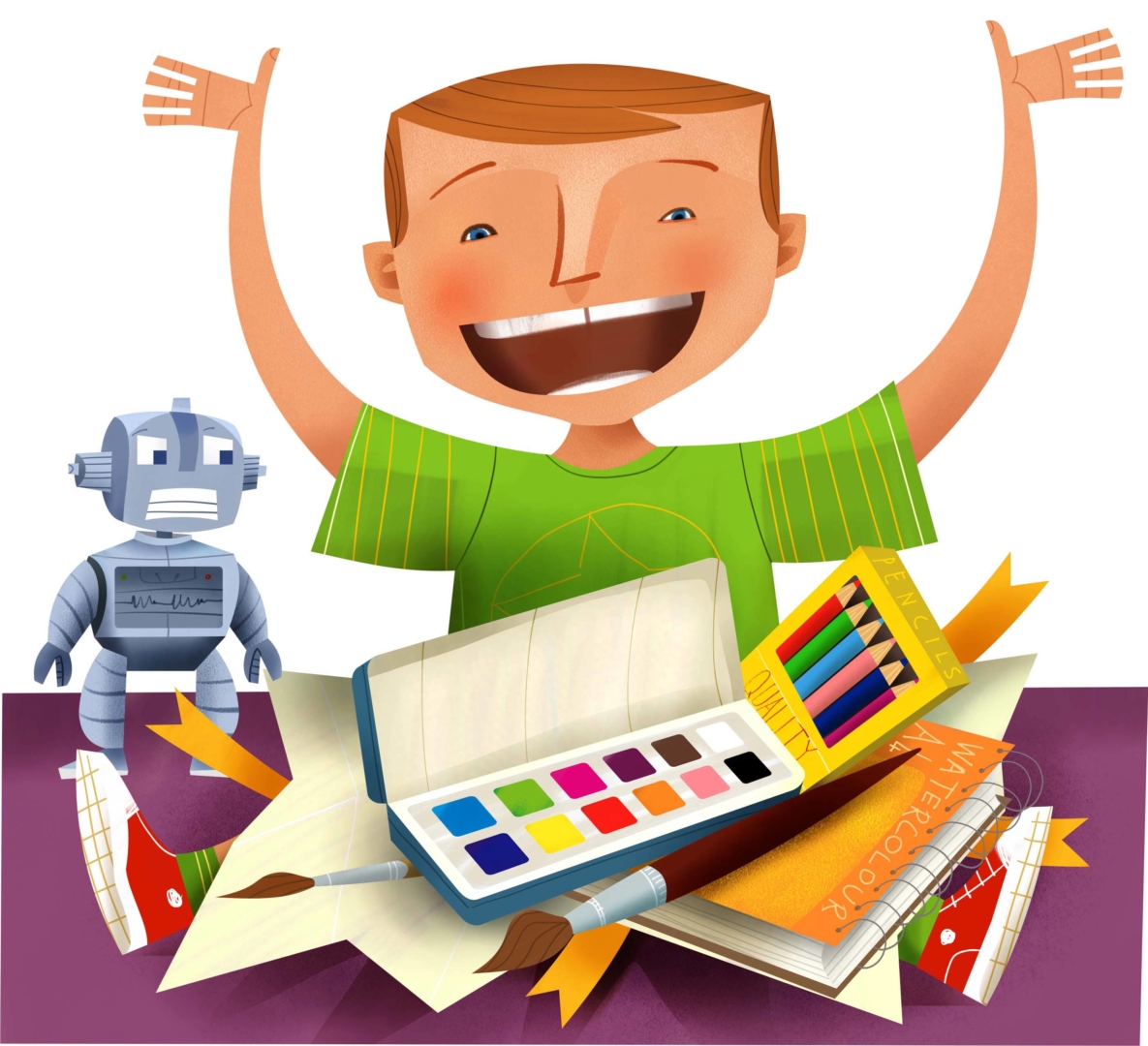 Helen McAllister maintains that simplicity should also prevail when selecting toys for primary-school-age children. “Children aged five and up are at a great stage to really encourage making and creating, so crafts and related items can be high on your list in this age group,” she says. McAllister suggests parents and families choose gifts that focus on values of acceptance and sustainability. “Think about toys or activities used in other cultures in order to broaden your child’s thinking, such as Japanese origami,” she suggests. Board and card games are excellent for teaching children about rules and sharing. McAllister particularly recommends evergreen games such as Snap and Uno, which come in different versions for various age levels and abilities.

Mary Chakires says there are good reasons that the playthings of other generations have survived so well, quite apart from the ‘coolness’ factor of retro toys. “To younger kids especially, kaleidoscopes, jack-in-the-boxes, spinning tops and skipping ropes are just great toys. To children, unlike us, they are seen as fresh and new.” Hand and finger puppets are toys that early-childhood experts often recommend but that Chakires feels are still neglected by parents. “Children talk to themselves through puppets with a complexity that they would rarely use with anyone else,” she says. “They are making up their own scenarios and storylines even before they’ve left the shop.”

Professional organiser Susanne Thiebe often gets called in after Christmas when parents realise their kids have too many toys. “A lot of stuff is broken by then and kids lose interest,” she says. “Many parents make the mistake of thinking that if one is good, more must be even better, especially when it comes to art supplies. I come across many children’s bedrooms with crayons scattered in every corner, but none of a decent enough quality to be fun to use.” Walker suggests that keeping these sorts of problems under control can be part of the gift itself. “Kids love to receive quality paint sets and art supplies, for example, in fun storage boxes with lots of compartments.”

Choosing quality over quantity is all well and good. But it becomes a problem for many parents and grandparents who have noticed their younger kids care less about how much is spent than how many presents there are. Mary Chakires suggests dividing the toys up, even when they come in sets, and wrapping them separately. “Your child will feel that they are getting a different present every time they open a new wrapping,” she says.

With five children aged between two and 10, keeping the quantities of toys to a minimum is something that Rebecca Hodgkins tries to achieve. The children’s grandparents pre-purchase tickets to an event or outing every year, and then follow through with the excursion shortly after Christmas. Hodgkins also tries to maintain a system of giving toys that she knows won’t add excessively to storage problems in her small house. “You just can’t go past toys like Lego, Duplo and K’nex,” she says, “Stick to one brand, and every new piece can go directly into a large box to be shared by everyone else in the family.”

While Kathy Walker admits to not being a huge advocate of technology, especially for under eights, she recognises that it’s becoming more difficult for parents of school-age children to avoid growing pressure to own the latest computer game. For older children and teenagers, Walker recommends computer applications that encourage creativity, such as ‘claymation’ software, which uses stop-action video to turn handmade clay models into animated movies. Helen McAllister is a fan of interactive gaming platforms such as Wii for over eights. “While not a substitute for outside play, and definitely not cheap to buy, the best computer games are those that require the child to interact with others, such as interactive quizzes, sports and music versions,” she says.

Anne Mackay is an occupational therapist who assists children with disabilities. She insists that buying gifts for all children, whether they have a disability or not, comes down to the child’s unique personality. “If you are buying for the child of a friend or relative, get to know what the child’s needs and abilities might be, but don’t forget to ask what the child actually enjoys as well,” she suggests. “Children with disabilities are really no different from other children in terms of the types of toys they might like. But the toys may need modifications, such as larger operating switches, or small knobs on jigsaw puzzles”. Some toys can be purchased with these types of easy-access features, but there are also companies that can adapt commercially bought electronic toys, so that they can be activated more easily.

Some children, such as those with autism spectrum disorders, can be overstimulated by lights and noise, or by the touch of toys with light, feathery textures. So these might need to be avoided. “For children who need slightly more physical support than other kids, you might consider ride-on toys with a lower, more stable carriage, or swings with bucket seats,” Mackay suggests. Toys that target the specific social or intellectual needs of a child can also be taken into account.

“We can’t always steer clear completely of toys that promise instant satisfaction,” adds Helen McAllister. “But what we can do is show our children that there are other things around, and most importantly, give them more time and space to play with them.”