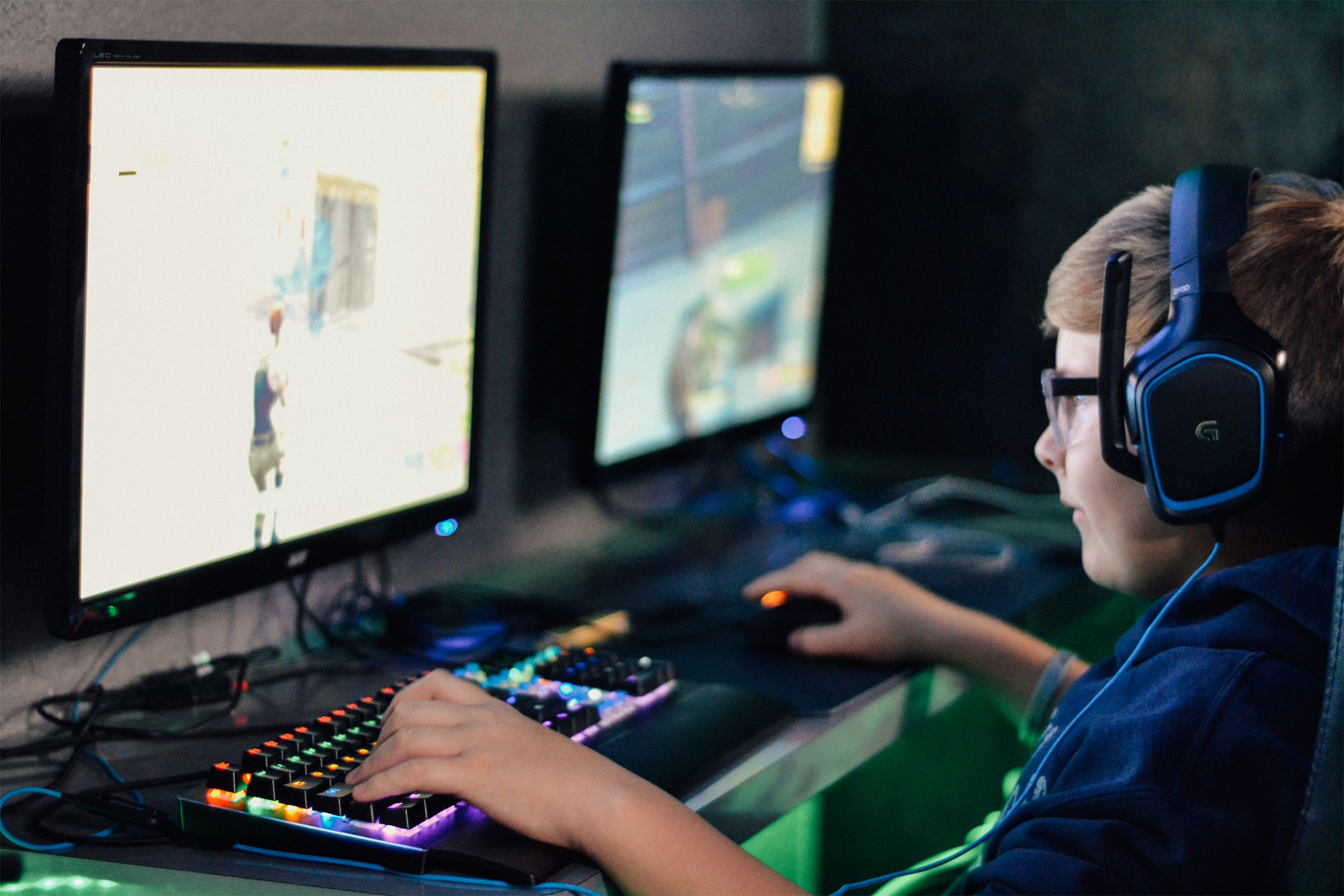 03 Jun The eSports revolution is here – what does it mean for education?

The growth in eSports during the corona virus lockdown has shown that its’ advantages are a positive and it should not be dismissed.

Although many sports fans might not realise it, some of the biggest sporting events of the past five years have involved organised competitive videogame playing called eSports. The most successful eSports players and teams complete on a professional basis for massive prize money in front of arena crowds of thousands of paying spectators, bolstered by audiences of millions of online viewers.

For example, there were more than 200 million concurrent viewers for the 2018 championship finals of the League of Legends, and more than 40 million players participated in online qualifiers for the Fortnite World Cup last year, competing for $30 million in prize money.

This is a serious business. The global eSports industry is worth more than $1 billion, and there’s now a serious push to include eSports in the roster of summer Olympic events. Closer to home, the Victorian government is spruiking Melbourne as “the home of Australian eSports” and supports an annual large competitive event at the city’s Olympic Park.

Recognising the educational potential of eSports

Given the youth appeal of eSports, schools and colleges are understandably beginning to explore the connections between eSports and education. In a practical sense, this has seen the emergence of representative school eSports teams sitting alongside the usual footy, soccer and cricket squads.

At the top end, some US colleges have started to offer eSports scholarships to attract elite student players. More prosaically, more than 160 high schools in Australia and New Zealand compete in the META High School eSports league run by the Adelaide Crows AFL club.

Prioritising student participation in eSports has been welcomed as having the potential to overcome the problems inherent in supporting physical school sports.

Perhaps the most obvious advantage that could be touted is inclusivity – eSports is seen as accessible to a range of students with health and mobility restrictions, as well as other physical disabilities. The ease of access also might help to diversify the nature of who gets to play elite school sport. Competitive schools’ sports in Australia have traditionally remained the preserve of white, middle-class, able-bodied boys; eSports has the potential to introduce a vastly different demographic of school sports “stars” and “gun” athletes.

No need for access to expensive sporting fields or coaches

At the same time, eSports can overcome many of the problems schools face when struggling to adequately resource and staff their sports provision – from the upkeep of pitches to finding specialist teachers and coaches.

In particular, eSports has been welcomed as a ready alternative for rural and under-resourced schools struggling to find the resources, specialist coaches and volunteer-time required to keep a sports team running.

In addition, eSports neatly avoid concerns over the dangers of physical school sport – from concussion to broken bones and soft-tissue injuries.

Teaching and learning applications of eSports

Interest is also growing in the possible teaching and learning applications of eSport across all areas of the curriculum.

Perhaps most obviously, participation in eSports is seen to develop a range of so-called “21st-century skills” – such as strategic thinking, collaboration, communication and peer mentorship. The emphasis on game-related data and statistics has obvious links with mathematics and numeracy, while the process of building, branding and managing teams fits neatly with commerce education and business studies.

The appeal of eSports has also been seized as a way of increasing the participation of under-represented groups in STEM subjects. As the North American Scholastic ESports Federation reasons, “ it could literally change the game in how we integrate STEM education with workforce sectors and industries in order to attract more students”.

The need for caution and the role of educational researchers

Of course, it’s important to retain a sense of perspective amid this excitement. While eSports is clearly booming in popularity, education has a long history of overhyping new digital technologies and genres. If eSports is going to buck the trend set by previous digital “next big things” in education, it’s important we develop a balanced perspective on how schools and colleges might make best use of eSports. This is where academic researchers with expertise in the areas of digital education and sports education can play an important role.

The dangers of exacerbating the digital divide

For example, experience of digital education over the past 30 years suggests a number of equity-related issues that might impact on school eSports. Most notable is the continuing ways in which students’ engagements with technology are compromised by enduring and entrenched “digital divides”. For example, eSports requires very powerful, high-spec computing facilities coupled with high-speed broadband connectivity.

We know that relatively large numbers of Australian households and schools lack this capacity – casting doubt on claims of eSports offering all students a level-playing field.

While eSports prides itself on an inclusive and supportive player community, research shows the wider online games culture can be far less inclusive. High-profile issues such as the “Gamergate” controversy, where women were harassed and “doxed”, reflect a misogynist and generally non-progressive nature of some online gaming communities, which needs to be considered when developing eSport participation in schools.

At the same time, other areas of academic research point to possible issues over the impact that excessive computer game-playing can have on mental health and physical wellbeing. Academic researchers remain divided on the possible significance of so-called “videogame addiction”, or disruption to sleep, vision and posture. Nevertheless, there’s been sufficient evidence to persuade the World Health Organization to list “game disorder” in the 11th edition of International Classification of Diseases.

The benefits of physical sports in schooling should not be dismissed

Similarly, physical education and school sport research highlights a number of ways that the perceived advantages of eSports are already being realised in other forms of physical sport participation. Indeed, the pedagogic basis of physical sport at school has advanced in a number of significant ways over the past 20 years. For example, the learning gains associated with participation in physical sport now cross over into other curriculum areas. More emphasis is placed on model approaches to teaching sports within physical education, including the Sport Education model and the TPSR (teaching personal and social responsibility), where students are involved in associated activities around the playing of sports – from organisation and planning, through to analysis, coaching and officiating.

Through participation in sports delivered using these models, all students can develop cooperation, negotiation and teamwork skills that transfer into other aspects of their lives.

More broadly, sport continues to be a tool for achieving a range of youth policy objectives, including assisting the integration of young people from migrant and refugee communities, through to supporting recovery from mental illness.

The rise of “informal sport” and ‘”pop-up” sport offers alternatives

In addition, ongoing research also points to the rise of so-called “informal sport” and “pop-up sport”, activities where people of all ages come together to participate in social, deregulated activities. The success of junior “park runs” and local “bunch rides” offer intriguing alternatives to the increasingly commercialised and corporate world of eSports. Indeed, the informal sport format certainly stands in contrast to the ongoing development of eSports as a professional sport supported by corporate sponsorship and a highly profitable gambling industry.

The urgent need for expert input and debate

As the push for eSports in schools gathers momentum, it’s crucial that education researchers begin to pay more attention. At the moment, much of the enthusiasm for educational eSports is well-meaning but under-scrutinised. There are clear educational opportunities here, but also a risk that existing problematic issues are replicated, and that some good existing practices in terms of physical sports are marginalised.

To date, most academics working in the area of physical education and sport research have ignored the rise of eSports – possibly dismissing it as not being based around physical activity, and therefore beyond their remit. At the same time, most digital education researchers have also been slow to respond, perhaps feeling that debates over the place of videogames in schools have long passed as a “hot topic”.

Nevertheless, if schools and educators are to make the most of eSports – particularly in terms of finding meaningful place within the broader curriculum – then we need more expert input and debate. As this brief introduction has illustrated, there’s a lot here to discuss and research. Let the games commence!

This article was first published in EduResearch Matters