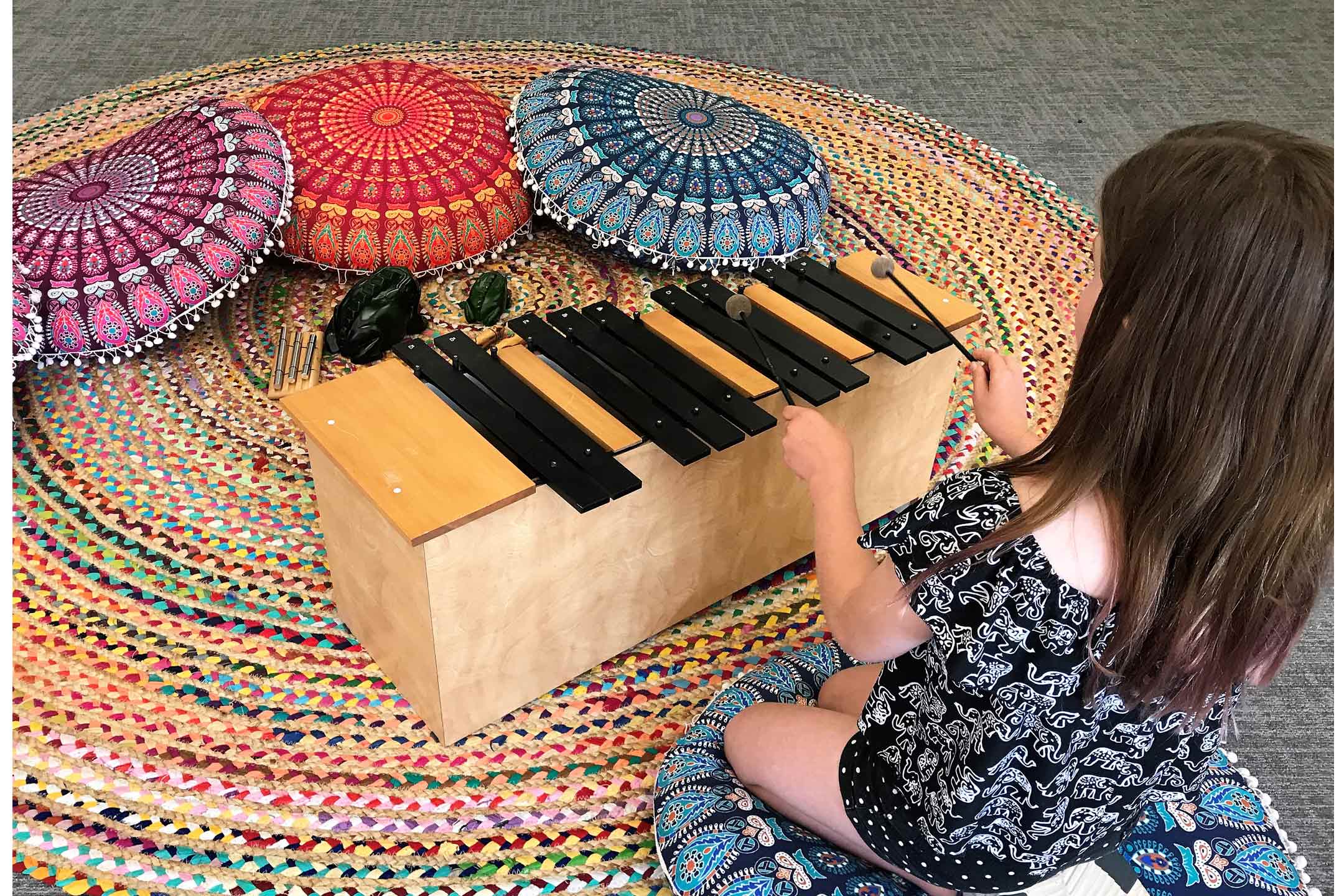 27 Nov The Power of Xpression

Posted at 10:19h in Editors Picks, Inspire by admin

Mental ill-health affects one in seven 4 to 17 year olds, reports Margo Ward. The cost of not supporting these children before their challenges grow with them into adulthood, is significant.

When Sarah* found herself homeless with two young children following a domestic violence situation, she didn’t know where to turn. Without family living nearby for support, her immediate priority was finding a safe and stable place to live. Equally crucial however, was the need to address the impact this turmoil was having on her young children’s emotional health. So when the children’s school counsellor reached out to Sarah to suggest that both children could benefit from the KidsXpress Expressive Therapy program, she unfalteringly embraced the opportunity.

At the time, few outside the allied health space were familiar with Expressive Therapy. When KidsXpress CEO & Founder, Margo Ward established KidsXpress in 2005, she did so to address a lack of services available to support the mental health of children impacted by toxic stress and adversity. Back then, Expressive Therapy was considered somewhat ‘fringy’ – viewed as an eccentric ‘second-cousin’ to traditional talk therapy, and not at all widely known or practiced. Margo combined the creative mediums of play, art, music and drama into one therapeutic setting to be delivered by two Expressive Therapists in a group model. It went on to become the first program of its kind in Australia.

Since then, national and international research has consistently proven what Margo and her team have known all along. That creativity and play – a child’s first and natural language – is the safest and most effective way to provide mental health support to children. This is especially true for children impacted by trauma. Due to their adverse experiences they may be unable or unwilling to put their thoughts and feelings into speech. Expression through art, music, drama or play, empowers them to express themselves without the boundaries imposed by words. 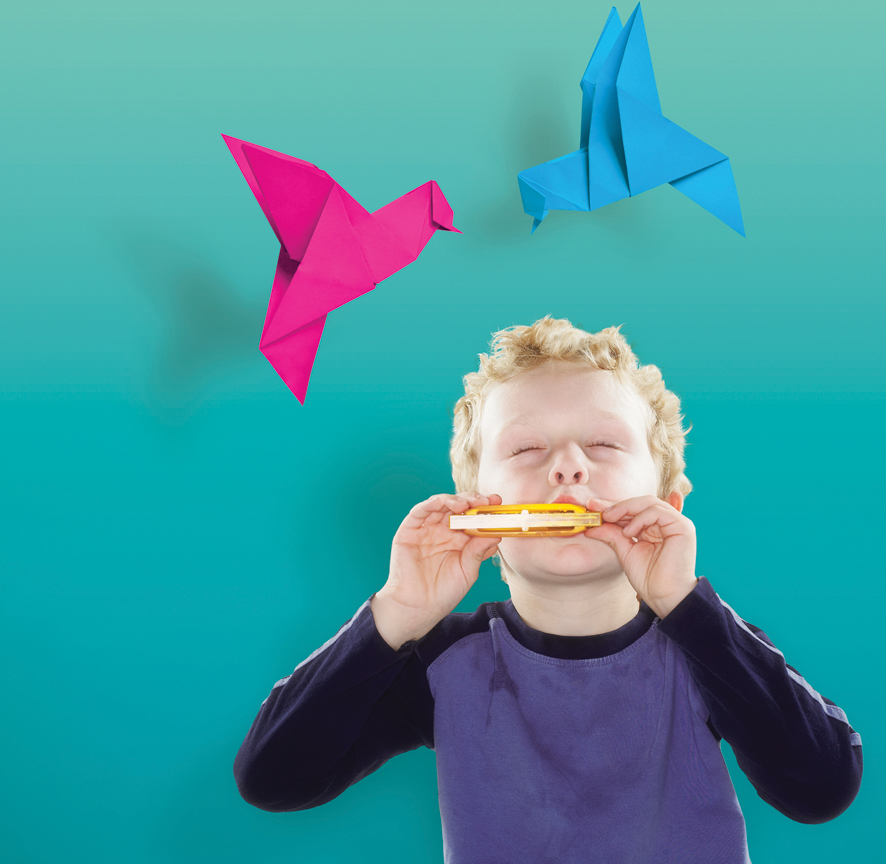 Sarah knows this to be true first hand. In addition to the toxic stress her youngest son was experiencing as a result of the family situation, he’d been diagnosed with global development delay and struggled to express himself verbally. Sarah credits the uniqueness of the KidsXpress program with providing her son with a flexible response in supporting him without the need for words.

“I’ve kept his artwork from that time. While I can’t bring myself to look at it as the memories of the trauma flare up, I can’t bear to dispose of it either. My son still uses art as a way of processing his feelings. My daughter does the same with dance. I know these are coping tools they discovered during their time with KidsXpress. Even today, I see them drawing on those tools regularly.  Despite now having a stable home and feeling safe enough to express themselves with words too, I know they will carry those creative tools with them as they continue on with their journey in life.”

Sarah’s children are two of the almost 4,000 who’ve been supported by KidsXpress since they first opened their doors 14 years ago. In that time, the mental health charity has gone on to receive numerous awards and national accreditation as an evidence-based, early-intervention program by the Australian Institute of Family Studies. Their program offerings have grown to include therapy in individual and combined parent/child settings in addition to their original group therapy model.

Last year, they incorporated trauma-informed training and education services that help build the capacity of educators and other child welfare professionals to better recognise and respond to trauma-impacted children.

With one-in-five Australian children having been exposed to three or more Adverse Childhood Experiences (ACEs) relating to abuse, neglect, loss, family dysfunction or other traumatic life event, the need to support caregiving networks is crucial. Ultimately, their trauma-informed services aim to help educators reframe the question of “What is wrong with this student?” to instead consider “What has this student been through?” and “What does this student need to reach their potential?”

Combined, the two programs are creating palpable impact. Professional referral agencies such as the Department of Communities and Justice (formerly FACS) and child psychologists are referring their young clients at record rates. Parents are reporting life-changing socio-emotional improvements in their children following the program. Partnering schools are noticing reduced behavioural challenges and improved educational outcomes.

But there’s more to do. Left unresolved, the impact of toxic stress and trauma resulting from Adverse Childhood Experiences (ACEs) can be detrimental. it can lead to issues with internalising and externalising problems such as affect regulation, relationship insecurity, poor socialisation, hyperactivity, disruptive behaviour and poor impulse control. ACEs are also known to be strongly correlated with adult physical health problems such as smoking, diabetes, alcohol and other drug misuse, obesity and heart disease later in life. The Draft Mental Health report released by the Productivity Commission last month revealed that the rate of mental health presentations at emergency departments has drastically risen by about 70% over the past 15 years.

“Mental ill-health affects one in seven 4 to 17 year olds” says Margo. “The cost of not supporting these children before their challenges grow with them into adulthood, is significant. Student learning outcomes suffer, the cost to taxpayers increases and society loses the potential of another person. For far too many, a child’s life lost is a loss no parent, family or community should ever bear and can never afford. KidsXpress receives no government funding and we rely on the generosity of our funders to deliver our programs. I’m so humbled by the number of individuals and corporates who have joined us on the journey towards creating a future all children deserve. Together, we’ve achieved so much in the past 14 years, but I know that our work is only just beginning”. 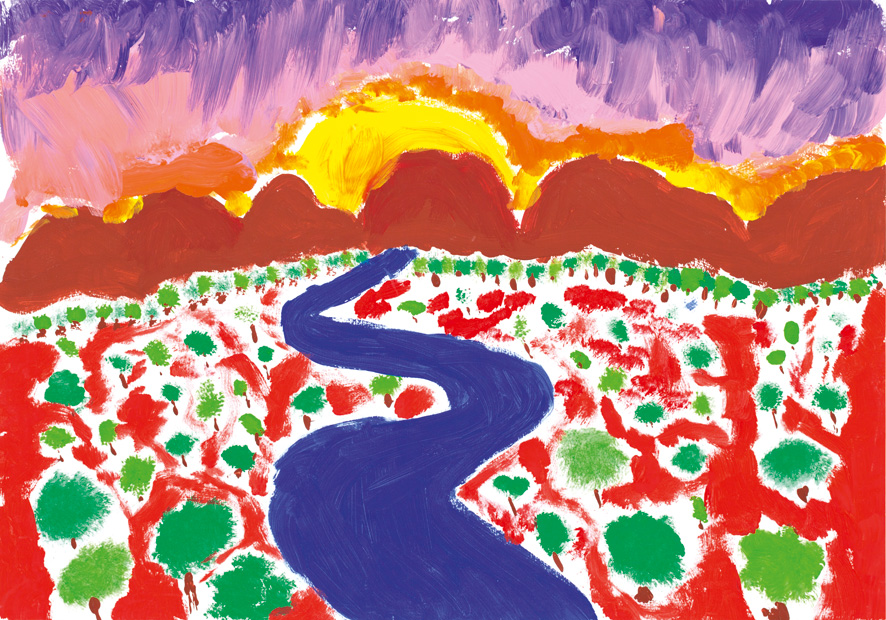 Emma*’s father was diagnosed with a fatal disease when Emma was only 5 years old; he has progressively been getting worse and Emma’s mum has explained to her that he is at the end of his life…What would it be like to go back in time?  To a time when everything seems perfect – ‘untouched’ even. That’s what Emma wanted to do, to go back to that time when her dad was untouched by a disease he had not control over.

Emma’s artwork ‘Untouched’ shows a strong blue path getting smaller and smaller as it weaves its way in to the distant sunset. 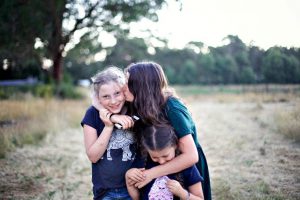 It’s no secret that children love new toys and gadgets. They love Christmas because of the multitude of gifts they receive. However, the most important gift any child could receive is the continual presence of their caregivers. Fostering strong, responsive relationships between children and their parents/carers helps to buffer children from the effects of toxic stress while also helping to build resilience and core life skills.

So this Christmas, in addition to gifts (or perhaps in lieu of) give children your attention, your availability, your mindfulness and the biggest gift of all … your time.  Click on this link  for 16 “presence” ideas. Print them out and tick them off as you go along. Or better yet, get your kids to pick their favourite “presence”!