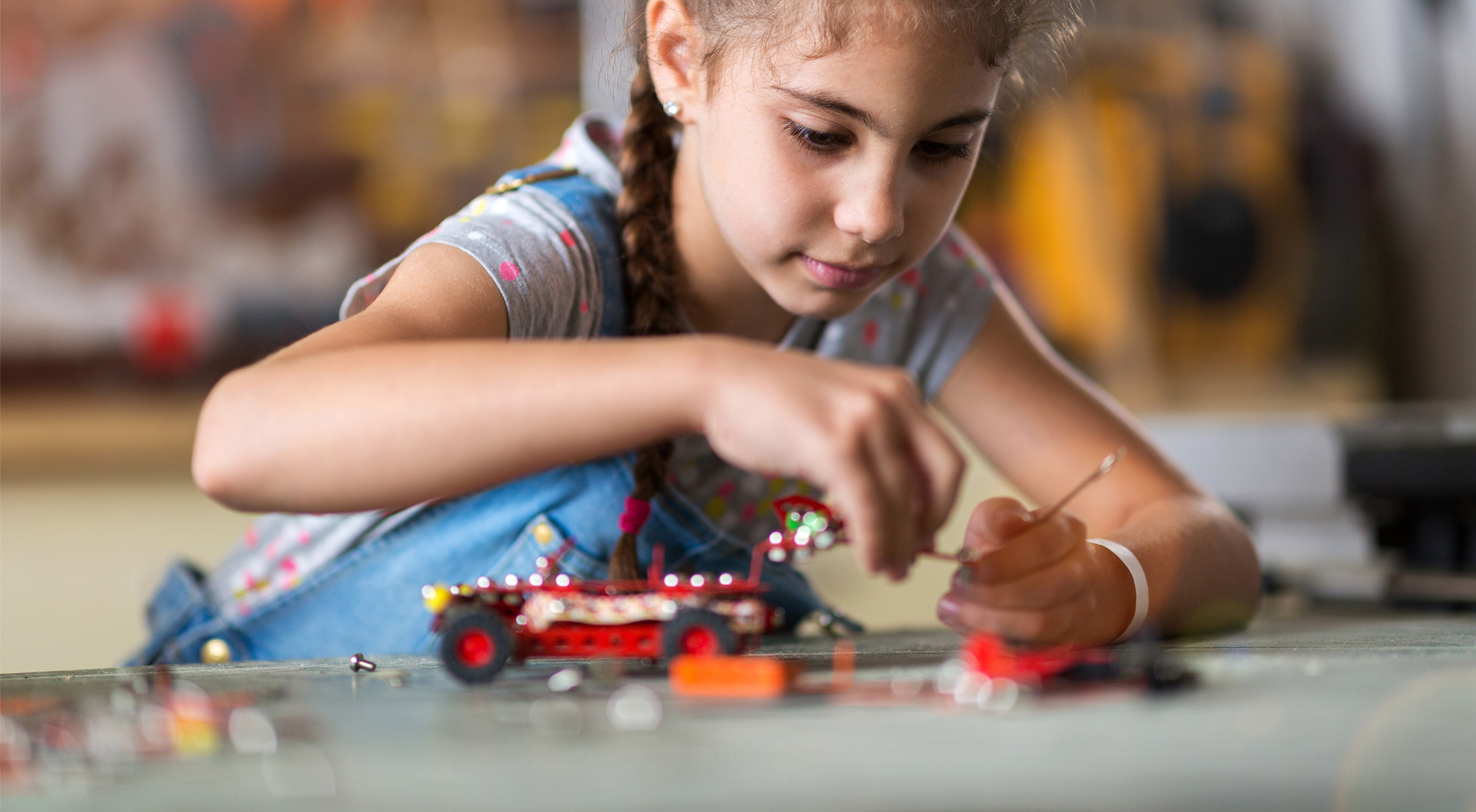 11 Apr The Wonder Of Why

Posted at 11:37h in Editors Picks, Education, Inform by admin

Professor Ian Chubb, AC, served as Chief Scientist of Australia from 2011 to 2016. Here he emphasises the importance of scientific knowledge and skills to our children and society. In a rapidly changing world where new jobs and even new industries will continue to be established, science allows children to be intellectually nimble and forge the path they choose. Beyond their career, you work to make sure your children have the skills they need to cope with everyday life.

Has your child ever asked ‘Why?

This is one of the earliest signs they are thinking scientifically. While a child’s interest in science occurs naturally, they need your support in developing it. By encouraging them to understand how the world works, even if you don’t quite understand it yourself, you are promoting a scientific way of thinking – analytical, logical, critical, systemic, structured and evidence-based.

As a parent, you need to prepare yourself for the possibility that your children may end up being smarter than you. One of the ways that might happen is through science. It focuses intellect and develops skills such as research, learning, enquiry and problem-solving. Not every child who studies science will go on to be a scientist, technologist, engineer or mathematician. Nor do we need them to be, nor want them all to be. Science unlocks the door to a variety of jobs. A career in scientific research might be one of those. But it is not the only one.

A 2012 Australian study – ‘A Background in Science’ – surveyed more than 800 graduates with science, technology, engineering and mathematics (STEM) skills. It revealed that one in four worked in scientific or medical research and 12 per cent worked in scientific or engineering industries. The rest had found jobs outside of science in sectors such as law, health, education, food, mining and construction. However, 97 per cent of all respondents, regardless of where they were working, said their scientific knowledge or skills were useful in their work.

Yet the evidence is that we are not producing enough graduates with this knowledge or these skills. A quarter of respondents to an Australian Industry Group questionnaire of employers across all sectors said the biggest barrier to recruitment was a lack of applicants with appropriate STEM skills.

Employers from across the economy believe STEM-skill shortages are limiting their business and ability to innovate. In a 2010 report, the Organisation for Economic Co-operation and Development (OECD) stated that countries that harness innovation are more likely to pull out of, and stay out of, recession.

In a rapidly changing world where new jobs and even new industries will continue to be established, science allows children to be intellectually nimble and forge the path they choose. Beyond their career, you work to make sure your children have the skills they need to cope with everyday life.

Many social and personal issues are more easily navigated with the aid of scientific knowledge and skills. This can make life less daunting. Eighty-eight per cent of respondents surveyed for ‘A Background in Science’ reported using their science knowledge or skills in understanding contemporary issues in society; 83 per cent in providing advice to friends and family; and 87 per cent in their personal interests and pursuits. These could be simple things, such as being better able to understand a doctor’s advice, establishing what is important or not in media reports about science-related issues, or identifying gaps in evidence from those pushing an agenda.

Science also contributes to the knowledge of our nation and world need. We face challenges to our climate, our health, our ageing population, our food supply, our economy and our security. We are concerned about our place in the world. We wonder how we might contribute to human wellbeing and help the world to a better, safer future. It will be scientific discovery and the use of scientific knowledge that gets us to the point where we can meet future challenges head on.

As the world gets ever more complex, the community will be increasingly asked to decide between options. Given that many of the big questions will involve science, our community will be better, our democracy more robust, if our citizens are able to make better-informed decisions.

This means having more than a passing knowledge of how science works and of statistics and probabilities and seeking out the evidence behind the assertions that bombard us on a seemingly hour-by-hour basis. An understanding of the history of science and the importance of the scientific method allows people to make important contributions to society. But we must start now in order to grow that understanding.

We need more people to be generating ideas that can be fed into a society ready to accept and analyse them. And we will not be able to do that unless parents understand the value of science, and pass that understanding on to their children. It is important parents are engaged with the question of what science their children are being taught at school.

Ten years ago, science received the second-lowest amount of time in the primary-school curriculum, averaging 2.7 per cent of teaching time. Measures are being introduced to lift that. For example, the Board of Studies, NSW, Parents’ Guide to the Syllabuses dictates that 6-10 per cent of time should be spent teaching science. That equates to 1.5 to 2.5 hours per week.

The recommended hours to be spent on science and maths in primary schools under the national curriculum are four per cent from Foundation (the first year of primary school) to Year 2 and seven per cent for Years 3 to 6.

We need to support our science teachers

Is that enough teaching time? Is it the right sort of science? Is it leading to good learning outcomes? We need to ask these questions as a community, but it will ultimately fall to parents to assist us in answering them. They need to work with schools and teachers and back up their efforts at home.

And while looking at how much science is taught, we need to look at how science is taught. Two reports prepared by my office last year identified inspirational teaching as the key to raising student interest to the level we need it to be.

In my interactions with teachers, I am heartened by the dedication of so many; and disheartened by how we seem to take them and their work for granted.

Governments at all levels seem less interested than they should be in ensuring appropriate professional development for teachers – wherever they may be around Australia.

We need to support our science teachers to be confident in their knowledge of their subjects and able to teach science (or teach about science) in a manner that reflects how science is practised – an enquiry-based, sceptical approach that is always looking for better evidence. Inspiring teachers will be those who know their subject well and can transmit that confidence, and their passion, into the classroom.

A recent report by the Australian Council of Learned Academies compared different countries’ STEM education strategies and identified the successful ones. The performance of Australian school students in science and mathematics, as measured in international tests, has a long tail of underperforming students, where 30 per cent score below the level of minimal competency required for people to thrive. The report also found that Australia has STEM-teacher shortages, particularly in regional areas, and a large problem of teachers teaching out of their field of expertise, particularly in mathematics.

It is a problem that has developed over time and it is having an impact on young people’s choices.

National enrolments in Year 12 biology, chemistry and physics declined slowly but persistently between 1992 and 2010. Advanced mathematics enrolments dropped 33 per cent over that period, and those in intermediate maths dropped 27 per cent. The number of university undergraduates studying the enabling science subjects – mathematics, chemistry and physics – declined in the 1990s and has not recovered.

The picture is a sobering one. It reflects the lament about a diminishing interest in science, not just here, but also in other Western countries. Doing nothing is not an option. We must work hard to keep our children asking ‘Why?’ and we need your help to do it.

A landmark Australian study, The Continuing Decline Of Science And Mathematics Enrolments In Australian High Schools, authored by researchers from Queensland University of Technology and published in 2014, found there had been a steady decline over the previous 20 years in the number of Year 12 students studying mathematics and science.