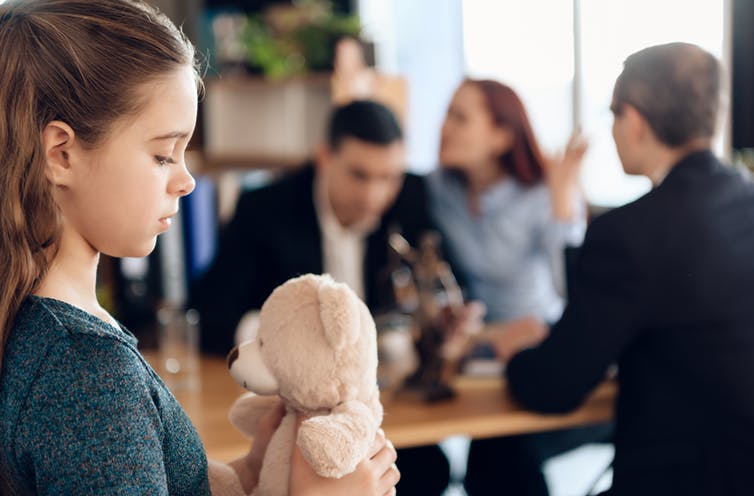 18 Jun To fix the family law system, we need to ask parents what really works

Posted at 09:00h in Editors Picks, Inform by admin

Rae Kaspiew, looks at research to find what might really work in the family law system

As Family Court Chief Justice Will Alstergren said late last year, when people separate, it can be “a shocking time in their lives”. This is particularly so when parents face each other in court.

Australia’s family law system has been the subject of many inquiries and studies. Just last year, the government announced another one.

One of the most exhaustive studies was the Evaluation of the 2012 Family Violence Amendments, published in 2015 by the Australian Institute of Family Studies and funded by the Attorney-General’s Department. Our research found that, although discussions about the system are often framed in terms of “who wins” out of mothers and fathers, the biggest challenge is actually parent and child safety.

What do parents think of the family law system?

Our research was part of the Evaluation of the 2012 Family Violence Amendments and included a number of studies, including a synthesis report, and an experiences of separated parents study. The latter study was based on two surveys, taken before and after the 2012 amendments. In each survey, we interviewed about 6,000 separated parents.

So, a large majority of separated parents sorted out their parenting arrangements informally. The great majority of these parents also said they were satisfied with the result.

The remaining fifth of parents reported using one of three formal family law pathways. In order of use, these were:

Of the formal pathways, family dispute resolution was the most widely used (by 10% of separating parents within 18 months of separation) because it is by far the least expensive and most accessible option.

Behind family dispute resolution came negotiation through lawyers (used by 6%) and then the courts (3%).

Do mothers and fathers have different views of the system?

It is in parents’ assessments of the formal pathways, particularly of the courts, where the differences between fathers’ and mothers’ views become apparent.

There were clear differences between fathers’ and mothers’ assessments of the courts from a child-focused perspective (meaning they felt the child’s needs were adequately considered). Three-quarters of mothers rated the courts positively on that count, compared to just 57% of fathers.

From an adult-focused perspective (the process “worked” for the adult participant), the parents’ assessments of the courts were much closer, but satisfaction levels were lower, with only 52% of mothers and 49% of fathers satisfied.

These lower rates of satisfaction may be because a decision by a judge creates the perception one party has lost and the other won.

Are we doing enough to protect parents’ and children’s safety?

In many respects, our findings are reassuring. But our research reveals that for many of the people who rely on formal family law pathways, the system has significant problems.

And the complex nature of their needs, in particular their safety concerns, are not receiving enough attention.

When asked whether the family law system protects children’s safety, as it is required to do, barely half of mothers (53%) and fathers (48%) agreed. Ratings were particularly low (less than 40%) among parents who had safety concerns either for themselves and their child, or for their child only.

These people typically use difficult, expensive formal pathways only because discussions, informal or mediated, are not an option. This is often because of family violence and safety concerns. And many of these people told us the system was not working for them.

Consistent with the conclusions of two recent family law inquiries (by a parliamentary committee and the Australian Law Reform Commission), these findings point to the need for the system to sharpen its focus on parent and child safety.

The discussion about family law reform ought not to be about winners and losers, but about how to protect the vulnerable parents and children who are forced to rely on it.

Read more:
Separated parents and the family law system: what does the evidence say?

In the Family Court, children say they want the process explained and their views heard. It’s time we listened