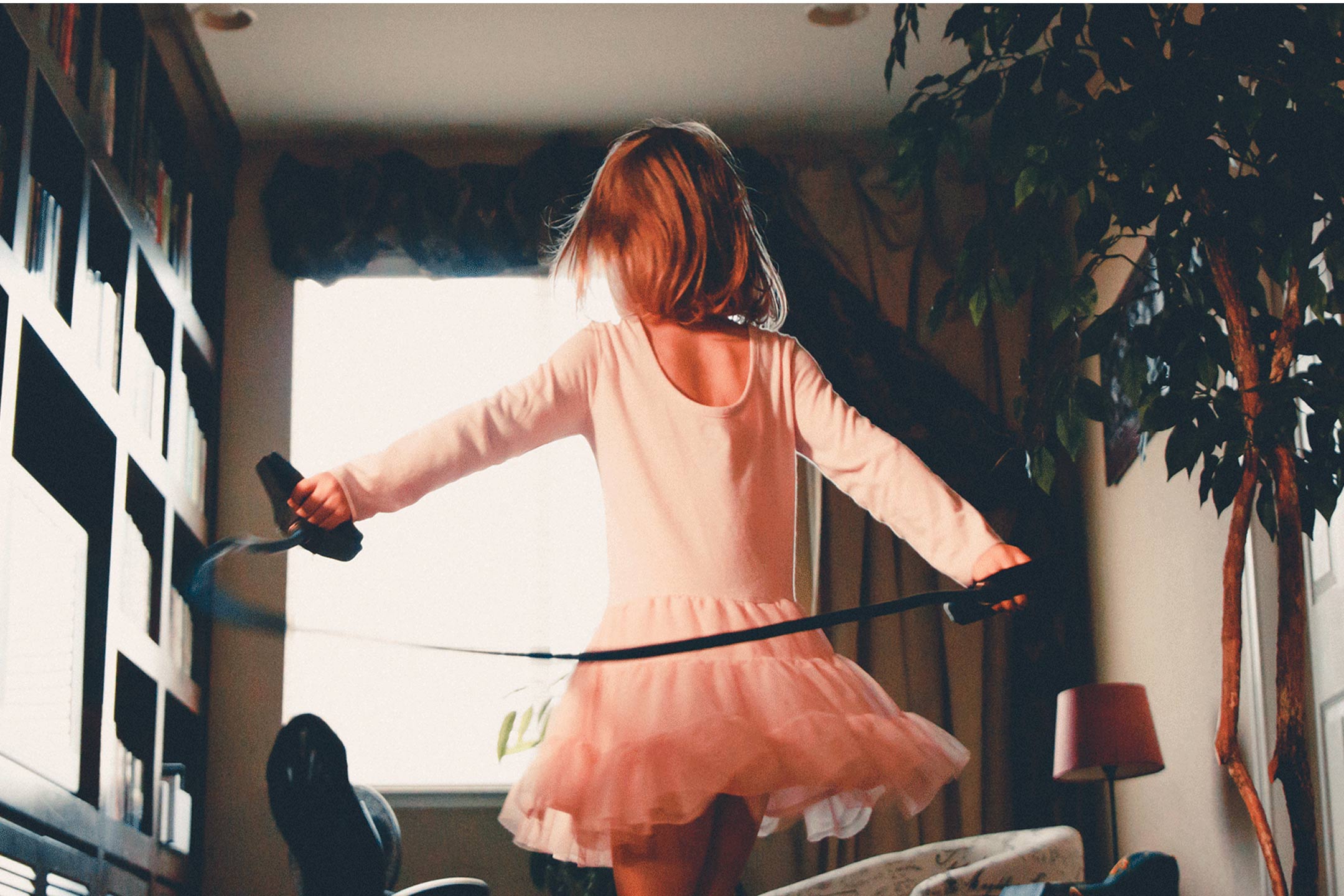 Posted at 16:37h in Celebrate, Editors Picks by admin

Johanna Rigg-Smith wanted a no-frills childhood for her daughter, but has learned to embrace pink tulle…up to a pointe.

If only I could bottle this confidence, this serenity, and hand it back to her when she turns 15, when those stars will seem out of reach, not worth the hassle, or just boring and stupid…

My younger (childless) sister and I are at odds over how I’m raising her niece. My daughter Ruby is obsessed with princesses, fairies and ballerinas. She wears dresses only and is usually in pink. This is not like the childhood we had. My sister is wondering how I let this happen… What happened to me?

Before I had children, it seemed obvious to me that the perfect childhood was the one my sister and I had. By today’s standards we might have been tomboys, but today’s standards seem to polarise girls and boys. When we were growing up, there were plenty of ways to fit in between ‘princess’ and ‘tomboy’. My sister and I were blissfully ignorant of what was supposed to be ‘girl stuff’ and ‘boy stuff’.

My nostalgia for our childhood, when we wore corduroy dungarees and focused on tree-climbing, bike-riding, marbles and make-believe, had created a prejudice against all things pink and frilly and anything that demanded that girls be ‘all girl’. Namely, ballet.

I’m not against ballet itself; it’s a beautiful, expressive art and I admire the dancers’ strength and grace. I also know there’s nothing wrong with little girls wanting to do little-girl things. It’s just that maybe I expected or, dare I admit it, hoped, that my daughter would be just like me.

I was probably worried that if I indulged any part of my daughter’s ‘girlie side’ it would take over and I wouldn’t recognise in her the childhood I had, the one I dreamed of for my children.

Pre-children, I’d promised myself I’d take my kids to outdoorsy, co-ed, all-rounder types of activity. I’d imagined myself on the sidelines at Little Athletics and Nippers.

I hadn’t imagined being in the front row of the audience at a ballet performance, but now that I actually have children, here I am.

Partly as a bribe for going to swimming lessons and partly indulging her passion for dress-ups, my husband and I signed up our pigtailed preschooler to the local ballet school.

Now, having taken my place in the row of parents and grandparents sitting expectantly at the first ‘viewing morning’, camera charged and ready, my pre-child parenting theories are looking a bit silly.

As she thumps around the sunlit hall with complete abandon, in a flurry of pink tulle, I see Ruby enthralled and, most impressively for an impatient preschooler, focused.

At ballet she is the swan, or the lost princess, or the rainbow fairy. Despite a plié that resembles a squat, and her left leg’s refusal to stop sabotaging her best efforts at a fluid ‘step-hop-run’, in her mind she’s fluttering through the clouds leaving us spluttering in a wake of fairy dust.

Miss Jane and Miss Chelsea (it takes two teachers to herd the first-year ballerinas through their paces) gracefully arc their arms over their heads as they instruct the girls to “Make your rainbows”.

Stretching onto their pointes, they then dip into the air and fold their hands over their hearts: “Now, pluck the stars out of the sky and put them in your heart, one by one”.

This stanza ends with a small pirouette before Miss Jane turns to lead her tutu-ed charges stage left for some ‘grand jeté’ across the room… minus one fairy – Ruby is still working on the stars. She may have missed a few and she’s taking great care to pick them up gently, cradling each one before placing it back in her heart with the benevolent smile of someone who really believes she’s responsible for the night sky. She’s just getting around to the sweeping-rainbow move, still grinning manically, when she’s brought back to Earth by a sharp clapping from the wings. She bounds back to the chorus line, pausing to sneeze wetly into her hands (good on her for remembering, I’m thinking) then joins hands with her classmates (to winces or sniggers from the other mums, depending on their daughters’ position in the line).

I’m vaguely embarrassed by this little public-health violation, but I’m barely present in the room either. I’m as entranced by my daughter’s disregard for the world around her as she is by the magic of her dance. She’s created another space for herself and taken me with her, letting me in on a secret that makes stars out of sunlit dust specks and waves out of the traffic sounds outside.

I’m so glad I brought her here. If only I could bottle this confidence, this serenity, and hand it back to her when she turns 15, when those stars will seem out of reach, not worth the hassle, or just boring and stupid; when she’ll be more concerned with how she looks than how it feels when she’s dancing, running… sitting still breathing.

Okay, she’s not out learning ball skills or doing mixed sports, but she’s using her body, learning coordination, doing something physical – with the added touch of drama and magic that’s captured her imagination.

I might even be a bit envious, wondering if I was ever as captivated by something, or if I still could be.

I’m also contrite, having to admit that nostalgia for my own beloved childhood teeters precariously close to self-righteousness. For now, my daughter loves the pretty things in life and the wonderful twinkling world that ballet invokes for her. I only hope she will retain the true freedom of the three-year-old ballerina, and seek it out in whatever she does.

I still harbour secret hopes of Nippers or football, but I know there’s so much time for all of that. I doubt there’s much time left to be lost in the clouds with the fairies. While it lasts, Ruby can keep her wings. She might even teach her aunt a thing or two about flying.